we all remember the oldest water heater known to man? 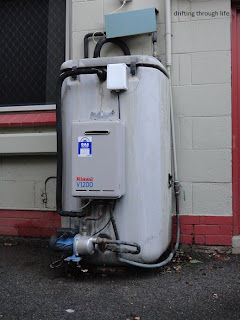 She has given considerable trouble over the short time I have lived here, not her fault, just that her parts have aged badly, all the rubber hoses in particular are badly perished. 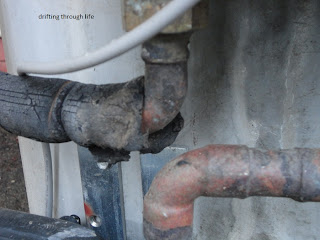 Just look at the state of this hose, and the rest were just as bad.
Really, I'm surprised that she hung on this long.


Last week, however, the old girl really blew a gasket!

The tank has been overflowing since last Tuesday, 26th, with many litres of HOT water flowing down the sides, and running across the ground to be lost down the drain.

This was reported (twice, maybe three times) and eventually a maintenance man came out for a look, then it was classed as a non-emergency.  Well, pffft!! 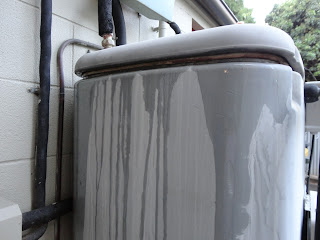 I didn't think this was good enough, as we tenants are paying for the heating and storing of water which was running away as fast as it could. 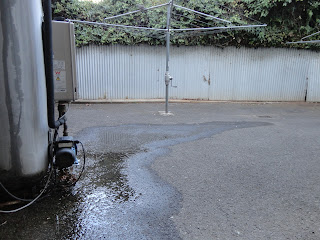 I took a photo of the spillover and runaway puddle, and attached it to an email to the housing authority late on Wednesday evening.
On Thursday,  a real plumber (I recognised the logo on his shirt, the parent company is based in Sydney and I lived next door to the lovely couple who own it back when they were just getting started), came to examine the system and reports were made, decisions were sought, an apology was received from the housing authority who said they "hadn't realised the situation was this bad".
(after how many reports and complaints to maintenance?)

Today, Friday, two lovely young plumbers have arrived to remove the huge old girl and replace her with four much smaller individual water heaters.
They're out there right now with their radio blasting and their spot welder, pipes, wrenches etc.and an electrician mate who joined them about an hour ago.

There simply wasn't space for individual storage heaters like every other unit has, pictured below, so we are being supplied with instantaneous gas heaters. 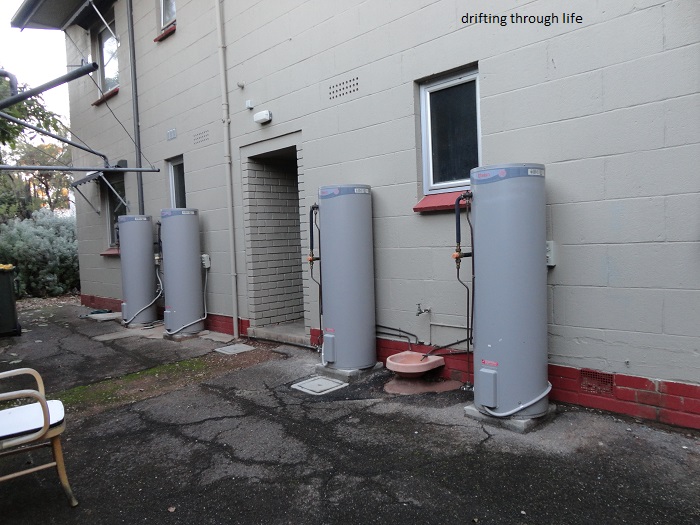 This is fine with me, they only heat the water as you are using it, so there are no storage heating costs.
(I'm used to these, have had them in most of my homes all my life.
My dad was a plumber/gasfitter and put one in at every home we moved to.
(he fixed up every stove we had too)) 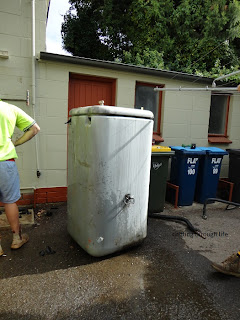 The old girl, disconnected and moved away from the wall. 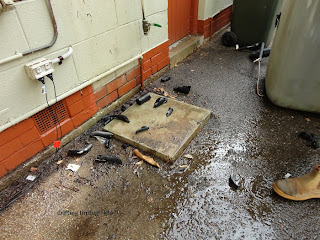 Here is where she stood for god-knows-how-many-years. 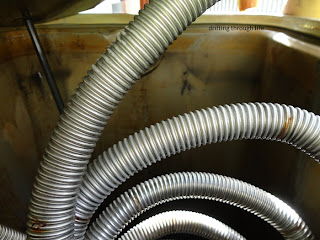 Inside the old dear - these are the hoses that distributed the water as needed to each of our four flats. 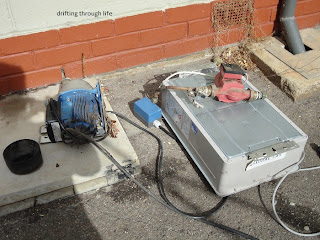 The gas heater and electric pump that were attached to the front of the old girl.
You might remember from my previous post on this subject  that no one seemed to know the exact purpose of the electric pump. Well, I found out by listening in to the phone conversation the plumber was having with his boss.  The pump drew water from the tank and sent it through the gas unit to be heated then sent it back to the storage tank. There was a thermostat inside the tank and when the water had reached the required temperature the pump would switch off and start up again whenever the water temperature fell below a certain point. The new water heaters still in their boxes. 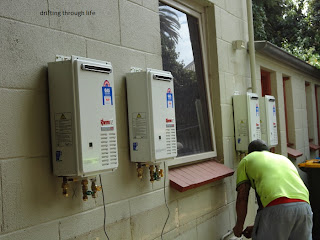 Here are the new heaters hanging on the wall, not yet connected to anything.

Once the job is completed and the heaters are operational, I'll zip out there for a final photo and put it in here.