Here's something new for Australian consumers to watch out for>> 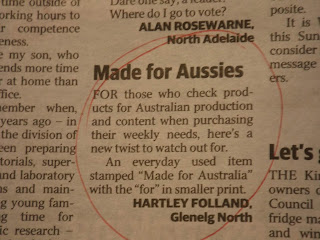 In case you can't read it, here's what it says:

"Made for Aussies"
"For those who check products for Australian production and content when purchasing their weekly needs, here's a new twist to watch out for.
An everyday used item stamped "Made for Australia" with the 'for' in smaller print."
by Hartley Folland, Glenelg North

I'm going to have to start checking a bit closer. Made for Australia, but by who? (whom?) 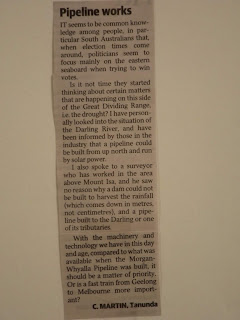 "Pipeline works
It seems to be common knowledge among people, in particular, South Australians, that when election time comes around, politicians seem to focus mainly on the eastern seaboard when trying to win votes.
Is it not time they started thinking about certain matters that are happening on this side of the Great Dividing Range, i.e. the drought? I have personally looked into the situation of the Darling River, and have been informed by those in the industry that a pipeline could be built from up north and run by solar power.
I also spoke to a surveyor who has worked in the area above Mt Isa, and he saw no reason why a dam could not be built to harvest the rainfall (which comes down in metres not centimetres), and a pipeline built to the Darling or one of its tributaries.
With the machinery and technology that we have in this day and age, compared to what was available when the Morgan-Whyalla Pipeline was built, it should be a matter of priority.
Or is a fast train from Geelong to Melbourne more important?
by C Martin, Tanunda"


Exactly what I've been saying, for how long now?