Kath and Andrew often join in as well, although Kath has been quite busy lately and unable to join us.
There are several other participants now though:
Jackie K at WorkingThrough It
Gillie at Random Thoughts From Abroad

I usually go with a theme for my Sunday Selections and this week I'm continuing with some photos of things I saw while out walking.

Last Thursday I'd been to the Arkaba Hotel to have a pre-Christmas lunch with some of the other tenants here.  The booking had been made by K, who couldn't make it in the end as she was unwell, and many of the others cancelled too, so there were just six of us, instead of the original fourteen, until we'd finished eating, then a latecomer turned up. 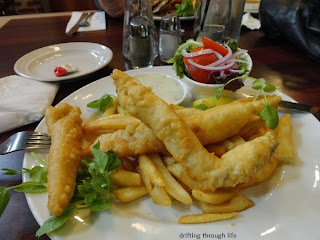 This was my lunch, beer battered barramundi with chips and salad. Three of the others had the same, nobody bothered with dessert.

After the lunch I caught a bus to town to finish my Christmas shopping and decided to walk along the Parklands for a bit. 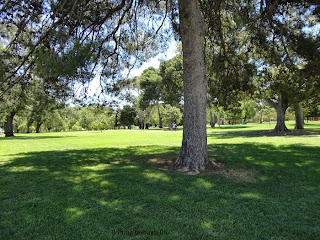 this is Rundle Park, Aboriginal name Kadlitpinna, situated between Botanic Road and Rundle Road, I'm walking along the Rundle Road side. This is the corner near the Dequetteville Terrace intersection. 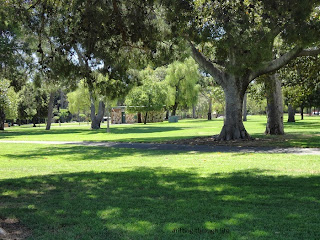 a little further along towards the city. 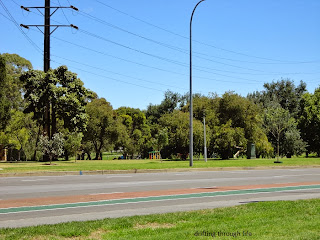 looking across Rundle Road on my left we see the northern edge of Rymill Park, Aboriginal name Mullawirraburka. Rymill Park has a man made lake in the centre of it and several wisteria arbours popular with bridal photo groups. 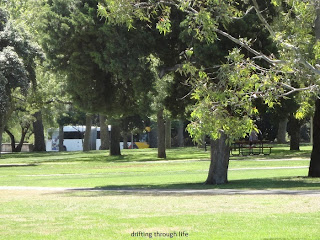 looking north across Rundle Park we see a bus travelling east along Botanic Road. Beyond the bus is our Botanic Gardens. Beyond that is the Zoo. I really must get there one day soon. 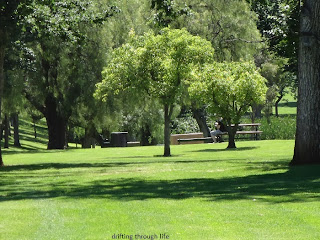 all throughout our parks there are seats, some with tables, and electronic coin operated barbecues for the public to use. 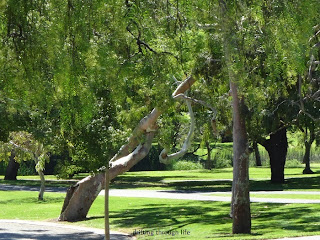 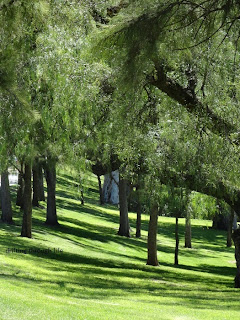 an avenue of light and shadow 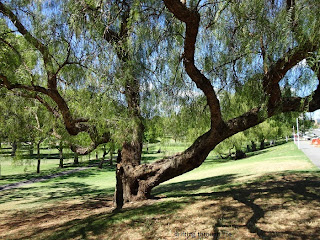 one of two popular peppercorn trees near the corner of Rundle Road and East Terrace, it has low, wide branches perfect for climbing and sitting. 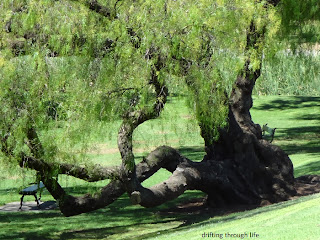 the other popular peppercorn tree with even more low, wide branches. This one had little kids clambering over it, so I sat and waited for them to leave with their mums.

From here I crossed to the city side of East Terrace and walked south towards Grenfell Street where I would catch my bus, and saw this on the footpath by one of the cafes..... 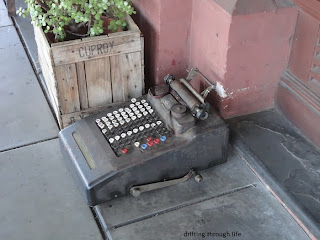 an antique adding machine which I mistook for a cash register at first. It was quite large, probably 35cm by 25cm although I didn't stop to measure it.

After getting off my bus, while walking down my street I heard cockatoos squawking and whistling at me, so I glanced up to see..... 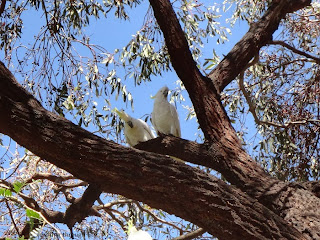 three of them!  That's the third one at the bottom of the photo, that little white blob. 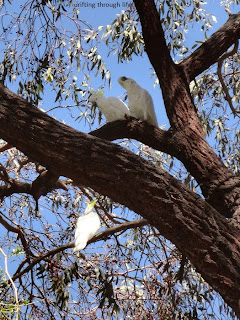 there's a better shot. I whistled at them and they hopped around from branch to branch showing off for me. 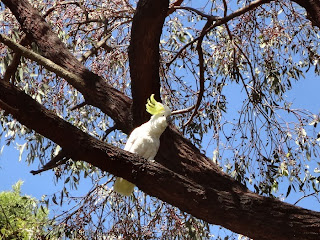 isn't he just gorgeous!
I had to stand quite close under the tree as the surrounding trees blocked any view of the birds, so got quite a crick in my neck from looking straight up, but they were worth it. 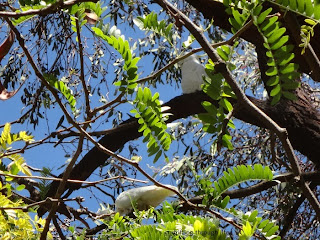 here they are hiding behind some leaves of the next tree over. 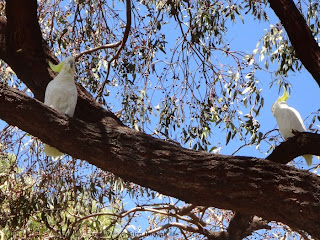 now there are only two, one has moved to another tree. 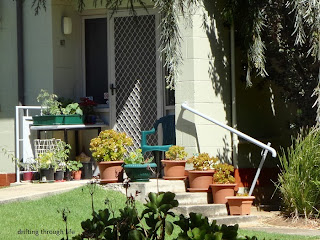 and here I am home again.

Tomorrow I am off to Port Pirie on the oh-god-it's-early-o'clock bus.

With my camera of course.