Kath and Andrew often join in as well, although Kath has been quite busy lately and unable to join us.
There are several other participants now though:
Jackie K at WorkingThrough It
Gillie at RandomThoughts From Abroad

I usually go with a theme for my Sunday Selections and this week I'm continuing with some photos of the area surrounding these flats I live in.

I heard a knock on my door one late afternoon recently, it was my neighbour P, she'd just arrived home from visiting a friend and wanted to tell me she'd seen a koala in a nearby street, maybe I'd like to go and get a photo.
Well, of course! A koala right here in the city? Grabbed the camera, locked up the place and headed out.

I checked two entire blocks around the street P had mentioned, but found no koala.
I did spot a random cat, 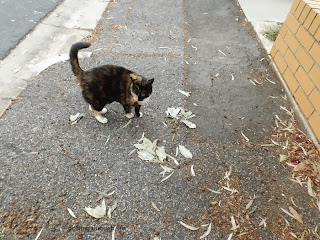 waiting for her owner to get home from work and feed her. 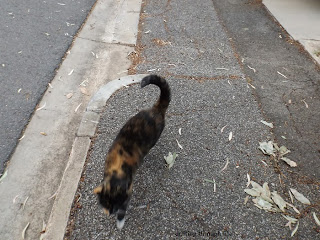 she came running to me for a scratch behind the ears and a little conversation.

I'd spent quite a bit of time wandering around gazing up into every tree looking for the koala, so the sun was going down and I was getting a little chilly, so I said goodbye to the cat and started walking home.

Turning into my street, I was greeted with this.... 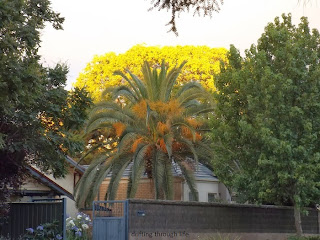 pretty fabulous colour contrast. Normally not so vivid, the lighter tree behind was lit even more by the lowering sun.

A little further along my street was this.... 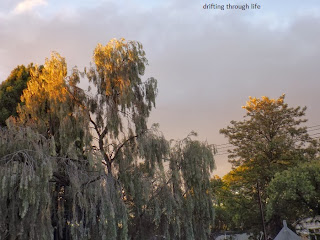 sunset gilded trees. The sun had dropped low enough to highlight just the tops of these very tall trees.

Disappointed with not finding a koala, I comforted myself with baking. 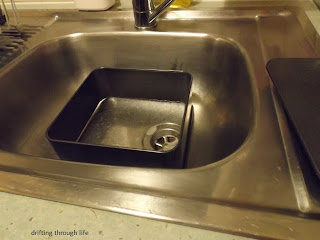 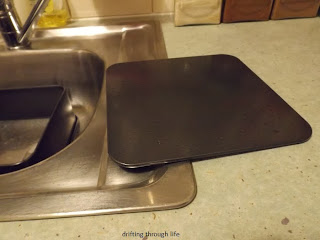 with a removable base!

What did I bake? 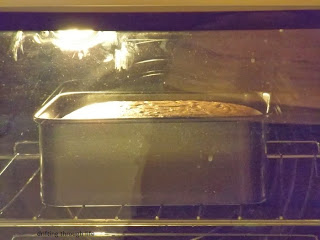 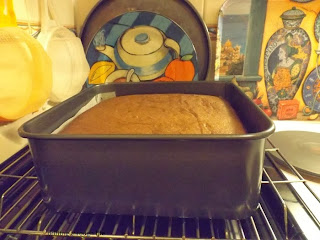 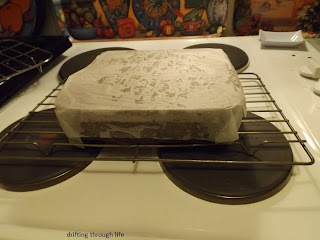 it's a non stick pan so the cake and paper lining came out cleanly. 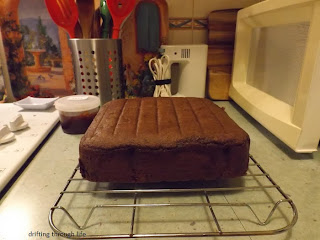 I sliced the cold cake through the middle, spread it with that pot of jam you see in the back left, added whipped cream and reassembled the cake.
I didn't bother with icing, just sliced it into portions and put them all in the freezer.

Of course this was a couple of weeks ago, so there is not much of the cake left.  A slice removed from the freezer while I'm eating dinner takes only ten minutes to thaw. Just in time for dessert.

I'll probably not worry about finding that koala, he's probably wandered on home by now, but I'll keep looking for the kookaburras I hear but can't see several times a week.