Kath and Andrew often join in as well, although Kath has been quite busy lately and unable to join us.
There are several other participants now though:
Jackie K at Working Through It
Gillie at Random Thoughts From Abroad

I usually go with a theme for my Sunday Selections and this week I'm continuing with some photos of the new constructions currently in progress around Adelaide.

Remember the dome like structure I featured last Thursday? in the background of the footbridge photo. 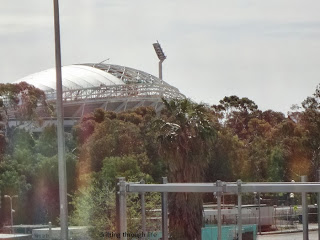 that's it there, in the distance. 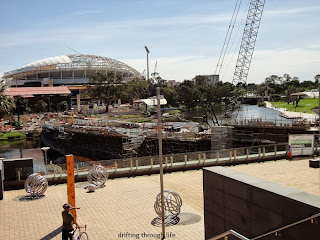 a wider shot, with the footbridge in the midground and some weird ball sculptures in the foreground. 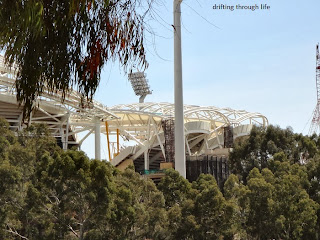 a glimpse over the trees. You can probably already guess what this is. There's a clue right there in the photo. 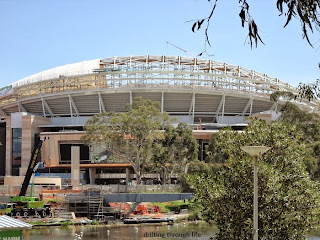 oooh! vaguely spaceship shaped. I'm still on the South side of the Torrens, zooming in. 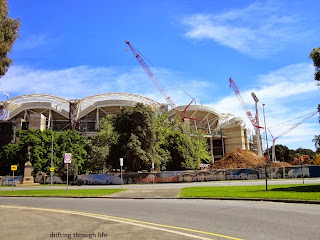 a long distance shot. With cranes. I do like cranes. 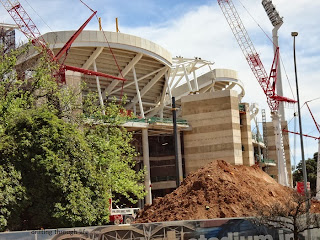 an underside view. Still with cranes. 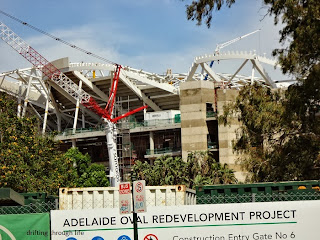 there's the footpath sign telling you all what this is. I've crossed the river now. 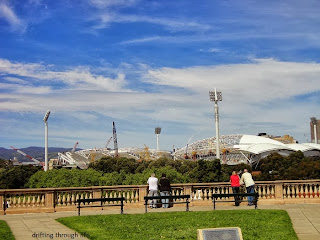 a view of the works from Montefiore Hill.
Before the construction started many people from North Adelaide complained that it was going to spoil their view, but it isn't much higher than the trees surrounding it and the view is mostly the office buildings of the city centre anyway. 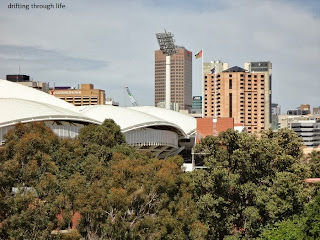 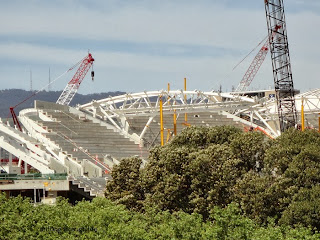 Ta-Da!! You've guessed by now I'm sure.
The new Adelaide Oval with more! bigger! better! seats. This is all so that football may now be played in the city instead of way out at West Lakes. The original Adelaide Oval, which has been touted as the best cricket pitch in the world (well, one of them) was only used for cricket. For years. 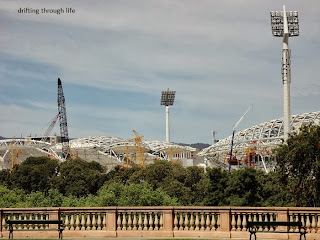 another shot from Montefiore Hill, without the sightseers. 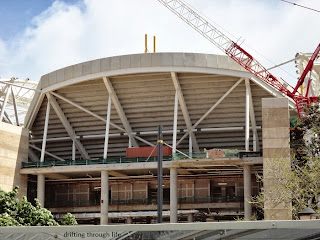 a closer view of the underside of one of the seating sections.

The "gubmint" want more people to visit the city centre more often, so decided to bring them in via footy matches. The idea is that people will shop in the city, view a footy match, then maybe stay in the city and eat dinner at one of many fine restaurants or even at the casino, (hence the footbridge).
It's all about the money of course. Bring in the locals and the tourists and watch them spend.
No mention of what they will do with their kids all day...... 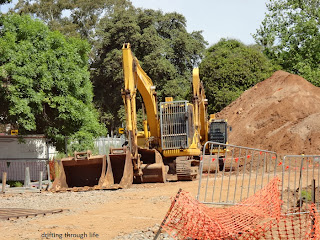 it was a Sunday when I was wandering around, so the machinery was resting.

I sure as heck hope they've got the parking options sorted out.
Imagine the gridlocks if they haven't! With people getting frustrated at missing the bounce. 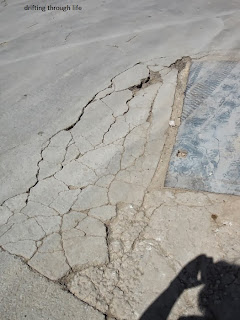 this is what the heavy machinery does to footpaths and roads.
I'm sure they'll get that fixed.

The oval will still be used for cricket matches, but with the grass getting torn up each winter by footballers fighting over the ball, I can't see this being the best cricket pitch in the world anymore.
A lot of extra work and money will have to go into repairing the pitch each season.