let's take a walk down the west side... 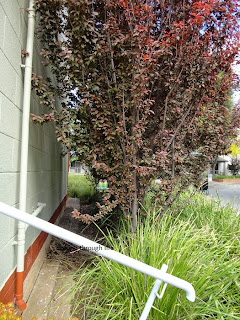 here we are. I'm standing on the steps, on the left is the building (duh!), me downstairs, zombie upstairs, on the right, the ornamental plum trees. Turns out the fruit on those is edible, juicy and sweet, although quite small, cherry sized.  I tried some last summer.  Anyway...there's a space just big enough to walk through and somewhere in that mess of thorny grass bushes is a tap. So of course I attached a hose to it. 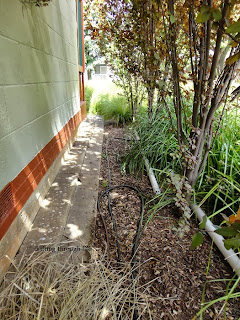 a better indication of the size; you can just make out the frame and shadecloth down the end there, which is my closed in back porch. It's quite shady down this side and I'm thinking maybe a good spot for wide pots of bulbs. 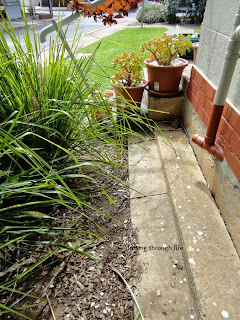 same spot, but looking back towards the front porch steps with the pots of jade. This end is sunnier. You can see the concrete is on two levels, the upper one being flat enough for pots, but not very wide. But pots don't have to be round.....they can be rectangular. And long. Ha Ha! ideas...... 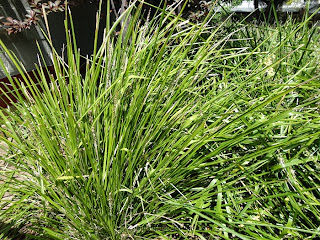 a closer shot of those thorny bushes. They were here when I moved in and I thought they were sort of nice, then the thorny spikes of seed heads developed. Ouch! Even the tip of each strappy leaf is spiked. 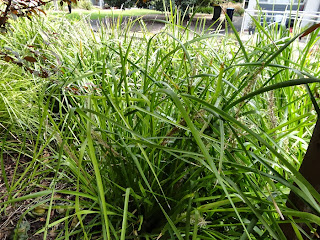 another shot. I was hoping you could see the seed spikes, I'll have to get in closer next time. Maybe they'll show if you click to enlarge. They're pale brown... 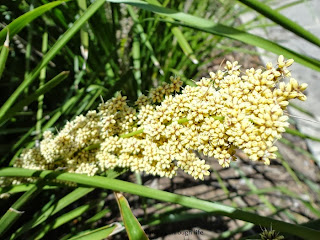 ...and some of the ones on the footpath side away from the building are heavy with flowers and seed. Once the flowers die off, the seeds look like millet. 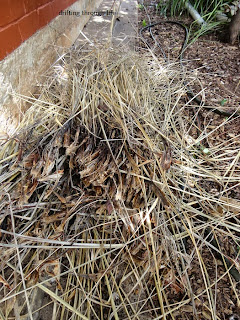 One of them has died so I pulled out the bush in bits, keeping a watch out for snakes, I don't think there are any, there's a lizard though. I wouldn't mind one bit if more of the bushes decided to cark it.  Then I could plant small grevilleas. The strappy dead leaves are quite long and awkward to handle, I'm going to have to cut them up into a bucket so I can put them in the green waste bin. 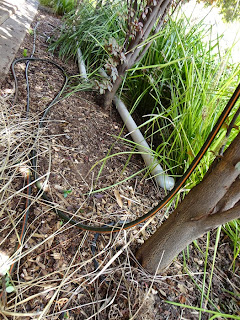 there's a fair sized space between two of the trees just to the left of where the dead bush was, that plastic pipe is just an empty pipe, not attached to anything, easily moved out of the way should I need to. I think maybe I'll get a largish tub in here and plant an apricot tree. If I push it a little forward it will get the sun that comes between the trees.

Want to see what I found when pulling out the dead bush? 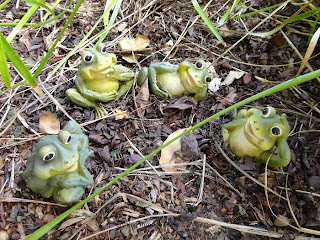 my little froggies! I put them in here just after I moved in, then forgot about them as the bushes grew up and over them.

Look at these happy faces..... 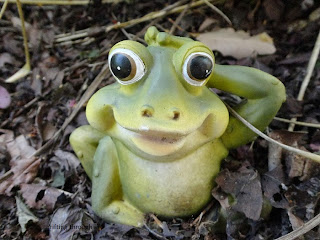 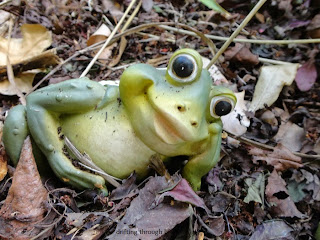 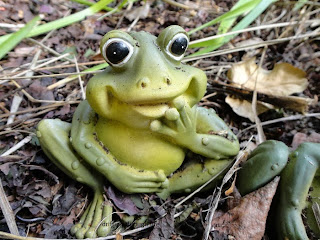 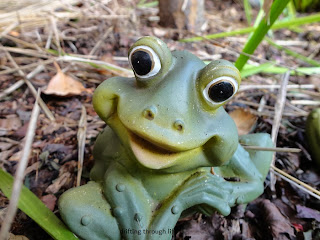 They're not ceramic or earthenware, they're some type of thin, easily broken plaster, or something. One of the frogs has quite a large hole in his back where he was dropped one day.

Behind the frogs, where the dead bush was, is a fair sized spot that gets a bit of sun. If I bring the frogs a bit closer to the edge, I could probably fit another big tub in there and plant a dwarf apple tree.
I'm hoping to get a multi graft with two kinds of apples, granny smith (of course) and a red apple.

So I'll be off to the nursery one day this week, for two large tubs, and I will also pick up replacements for some of my seaside daisies that have been eaten by slugs and snails.