Santa knows what Australia needs most 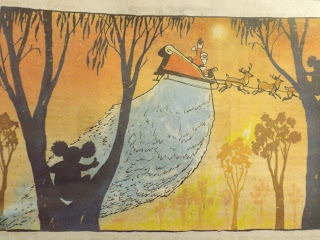 From yesterday's newspaper, Wouldn't that be wonderful!

And this from last week's newspaper: 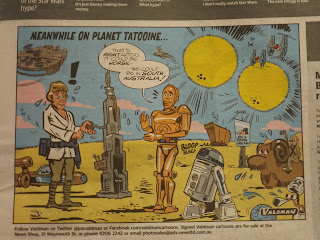 "That's right Artoo, it could be worse....we could be in  South Australia!"

and I was mistaken when I thought the Cudlee Creek fire was under control and almost out. she took off running and devastated more of the countryside.

I also saw news footage of a farm where a field of donkeys had been burned with only one donkey left wandering around, I suspect that farm is one owned by a friend of my neighbour V, who has many animals besides the donkeys, including alpacas, cats, dogs. I'll find out later today if the farm was hers. Right now her phones aren't answering.
Wildlife rescue is swamped with injured and starving koalas, who are only now coming out of hiding and looking for food and water.

Later edit: I've found out my friend's farm is okay and all her animals. Her neighbour has some of his sheep in her fields and came around with a huge water tank on his truck and wet the perimeter of her farm as well as his own. but the surrounding fires still burn so we keep our fingers crossed. She did evacuate her dogs and cats and will bring them home once the danger is past, but the bigger animals have to stay where they are for now.