I have something new in my kitchen

August 08, 2013
When I first moved in here, I noticed the rangehood over the hotplates wasn't very effective.
And the light didn't work. But I put up with it, stuck a battery operated LED light on the wall tiles....but it was facing out at me instead of down onto my pots, so I got blinded and took it down again.

anyway.....a couple of weeks ago the extractor fan died.
I phoned maintenance.
Got the "your call is important, press one for  this, two for that" and hung up.
Tried again the next day hoping they wouldn't be so busy.
Same thing.
Third try, I actually stayed on the line, waiting to see if I could get heard.
No go. I did use up most of my pre-paid credit though. I don't have a landline, just the mobile.
Humpf!

On the following Monday, I went into the city, to the housing office and used their direct line handset.
Holy Jiminy!
Straight through!
Stated my case and was assured someone would be out on the Wednesday to look at it.
And they were. Two of them. Just to look at the rangehood.
Between them they decided that yes, they did have a different model in that size, so replacing the unit would be a piece of cake.
I mentioned very clearly that I wouldn't be home on day X or day Y, but any other day was fine.

Day Y rolls around and of course I wasn't home.....but I got a phone call from the electrician, who had a rangehood in his truck and called around on the chance that I might be there.
Sigh.

Well I was clear across town and not about to hurry home, after all it is two bus rides and who knows how long that would take.
So we arranged a definite day for installation. 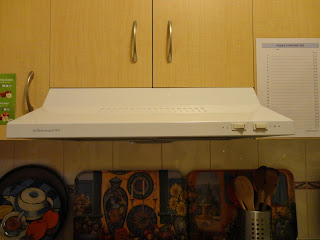 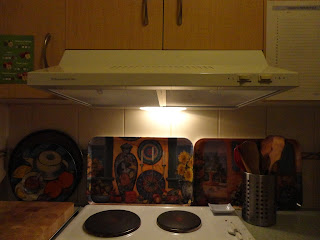 with a working light! Yay! 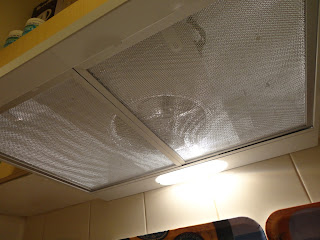 the filter panels are huge compared to the old hood which only had a slim filter across the front, where it was completely useless. The fan is much bigger and much more powerful, it actually sucks up the steam.

When the electrician pulled down the old hood, he and the hotplates got showered with bird seed.

Remember way back when I first moved in I told you all about the previous tenant who kept birds? Inside? All over the flat! Truly, he had cages and loose birds everywhere and I was cleaning seed and poop for days, also glue that had held the cages in place.....

I'm glad that old rangehood is gone, because every now and then I would have a few seeds drop down out of it, luckily I had lids on my pots. Now I don't have to worry about birdseed anymore.
I swept up all that spilled seed and tossed it out on the grass.
And got busy cooking. Another batch of spaghetti sauce with meatballs.