I usually go with a theme for my Sunday Selections but this week I didn't spend time preparing, so I have a random selection. Halloween isn't an Australian tradition, not many people go trick-or-treating and most of us don't gather candy to hand out, but that doesn't stop the shops from filling their shelves with themed goods. 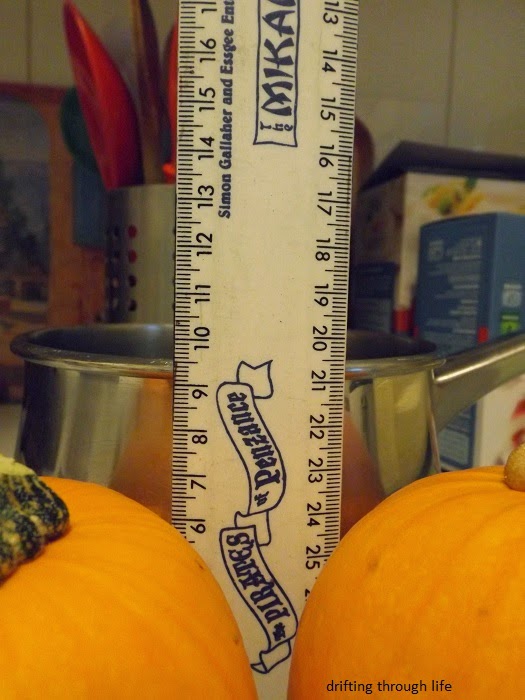 I couldn't resist these miniature pumpkins, shown here against my smallest saucepan which is only 9.5cm high, as you can clearly see.
Halloween parties are reasonably popular, with kids dressing in costumes and parents decorating a room or a back verandah, baking 'spooky' goodies etc. 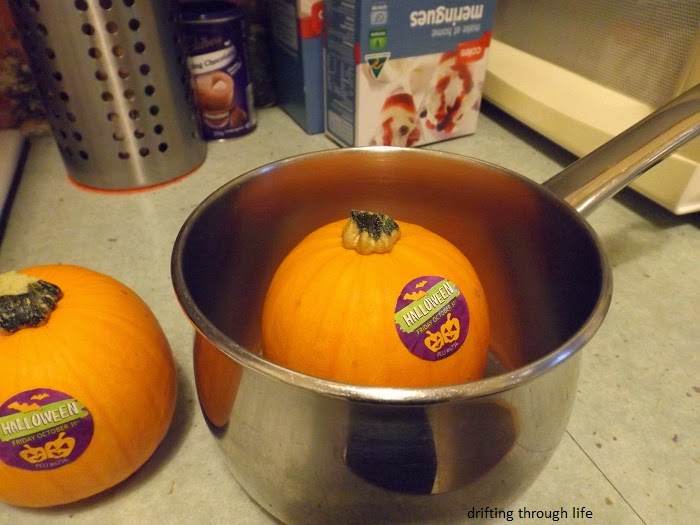 
Into my garden last year I had planted three (of six) apricot seeds which I'd kept, years ago, from the juiciest, best tasting apricots ever! Two of them germinated and grew to be almost eight inches high. When the grasses were removed, I moved the apricot babies as well, into a pot. Probably way too soon as I think they have now died. Spring is well advanced and they should have leaves by now, but there is nothing green there, just two brown sticks.
So I found the envelope which I knew held at least two more seeds, and only found one in there, the others may have fallen out and be hiding in amongst other seed packets. I placed that one precious seed in a cup of water and air bubbles immediately formed on its dry surface. 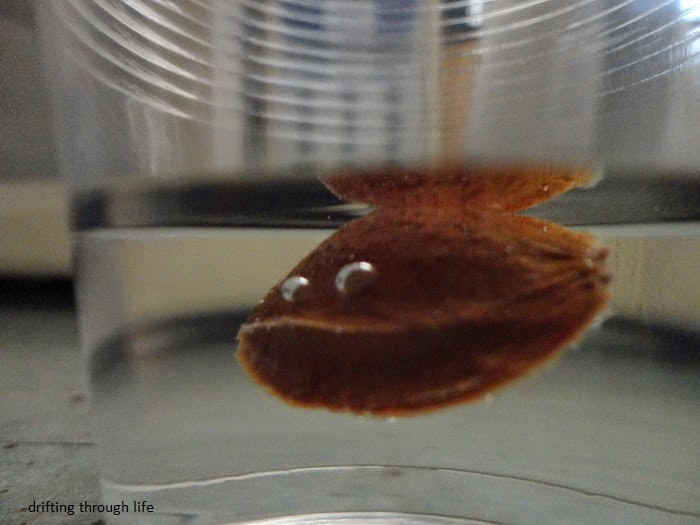 he looks happy to be getting a drink after all these years! It's just the shape of the seed, but that definitely looks like a smile to me! 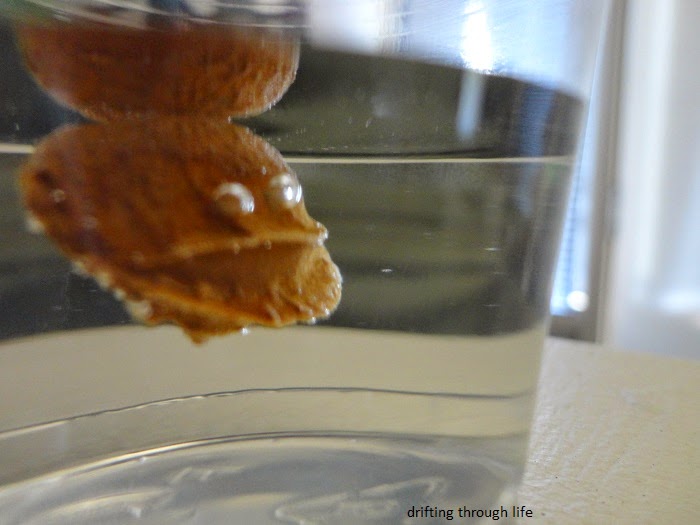 here he is in a different light.
Two days later, he has absorbed enough water to become heavy and sink. This is a good thing. If he absorbs enough to get the inner kernel germinating, I still have a chance at growing a tree.
A tree which will provide me with the best apricots I ever tasted.

still in the garden; well on my front porch actually, the first lizard of the season has been seen.
Our lovely garden filled complex has a very good colony of blue-tongue lizards living in the grounds.
A notice was placed in each letterbox by another resident asking people to please be careful when driving and not run over any of them please. 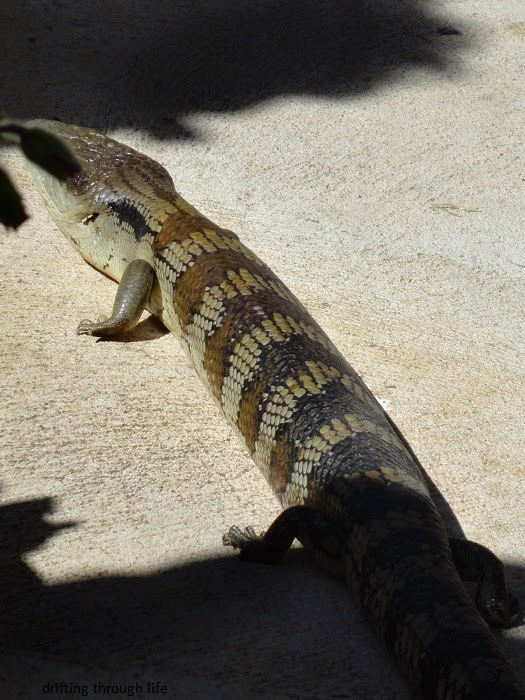 Here is "my" blue tongue lizard. The shadows are from several people, including me of course, taking photos of him. ("mine" because he lives down in the gap by the downspout beside my front porch). 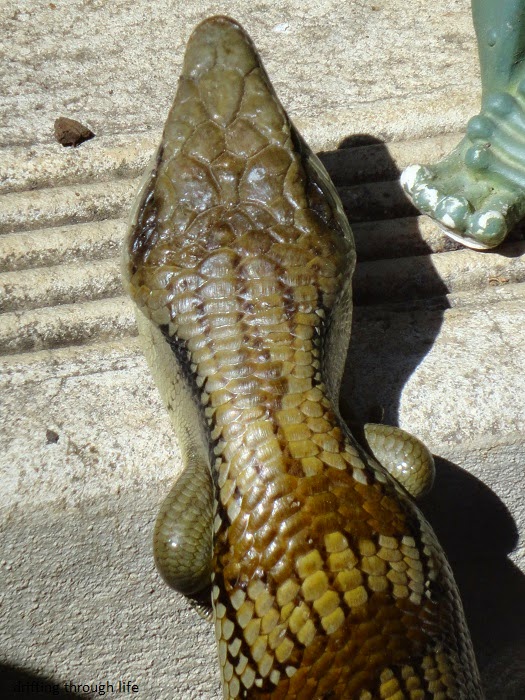 climbing up the step.
Blue-tongue lizards are not poisonous and do not pose any threat to people or pets. They are handy to have in the garden as they eat snails, caterpillars and other insects. 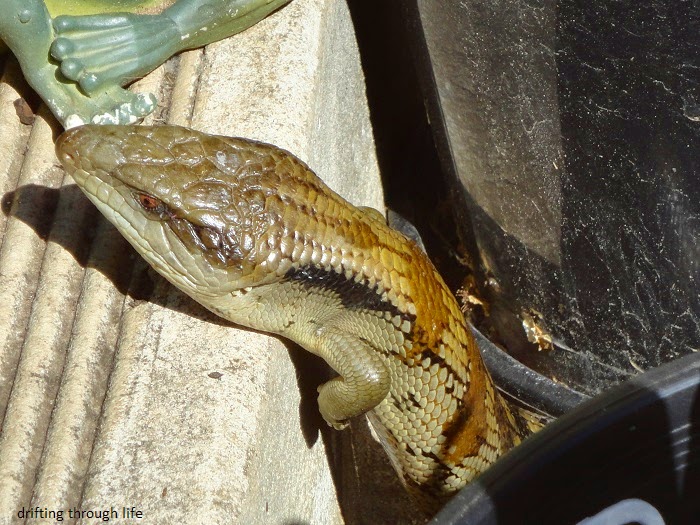 I tried to get a photo of his blue tongue, but I wasn't quick enough.
Blue-tongue lizards are slow moving, (not this one!) and not aggressive. If threatened or cornered they will open their mouth wide and stick out their blue tongue to frighten off predators. 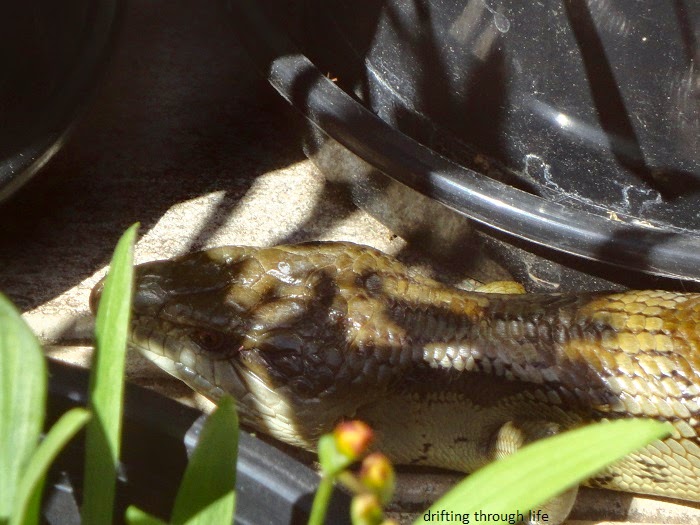 Here he is making his way between my pots. After this we left him alone and he crossed my porch and disappeared down the gap by the downspout.
They live under rocks or in crevices and come out during the day to sunbake and look for food.
This is one reason I put the birdbath down low.