September 11, 2015
Hello, it is I, K (aka NO ONE back when I could be bothered with my own blog), stepping in as a special guest blogger, while River is having computer problems (which I will be looking into on the weekend, like the amazingly awesome daughter I like to think I am).

Feel free to bask in the greatness of my presence, or grumble about how you're stuck with me, and River damn well better be back soon to wrest this blog from my grasping hands.

It's been awhile since I've done one of these so I'm not sure what to say anymore. I think I'll do what I always do when I'm at a loss for words, and talk TV.
Specifically one of my current favourite shows, Rookie Blue, which you are unlikely to hear about from River, so when she reads this, she will be ruing the day she gave me her password. HAHAHAHAHAHA.

Rookie Blue is a Canadian cop show, that just finished it's 6th and most likely final season. It's entertaining, although some people have said it's a bit slow to start. I say stick it out until the episode where a few of them go undercover as people of negotiable affection (episode 4 of season 1), it picks up after that. The first 4 four seasons are only 13 episodes long, seasons 5 and 6 are 11 episodes each, so it's perfect for weekend marathoning. 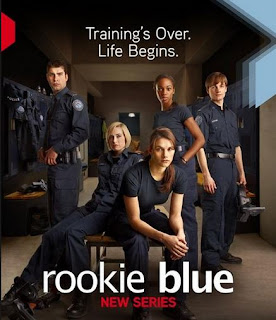 Look how pretty the five original rookies are.

If you do watch, give Gail (played by the awesome Charlotte Sullivan) a chance. I liked her from the very start (I always love the bitchy mean girl, who turns out to have an underlying vulnerability - that probably says something about me, but I'm not here to psychoanalyze myself) , but some people (who are clearly insane) take some time to come around to her side of things.

That's it for me today, and if you all are lucky, and maybe wish really hard, River's computer problems will be fixed before too long, and she'll be back here with her far superior posts.