May 07, 2015
from Hard Eight- a Stephanie Plum novel by Janet Evanovich

"South River jug-handles off Route 18. It's a small town squashed between strip malls and clay pits and has more bars per square mile than any other town in the state. The entrance provide a scenic overlook of the landfill. The exit crosses the river into Sayreville, famous for the great dirt swindle of 1957 and Jon Bon Jovi."

(nice enough to drive through but you wouldn't want to live there?)

"I stopped at the store on the way home and got supper." I dumped the contents of the bag on the counter. Five TastyKakes. A Butterscotch Krimpet, a Coconut Junior, a Peanut Butter Kandy-Kake, Creme-filled cupcakes, and a Chocolate Junior. Life doesn't get much better than this."

Here's a good idea which will never happen: 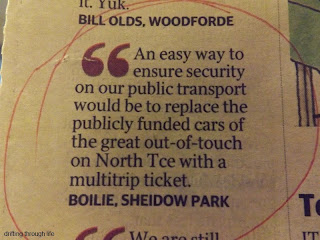 from our Sunday paper.
Seems like a great idea, but I can't see those privileged people giving up their luxury vehicles to get on our buses and trams.
It's like that other "good idea", where they have someone catch a bus to prove that buses are clean and quiet and do run on time.

Well of course they do, when some political person gets on.
Because it is made known beforehand that so-and-so will be riding the bus on this or that day at a certain time. And a route is chosen where there aren't a gazillion people waiting at every stop to hold up the schedule.
So that bus gets cleaned and runs on time for that one scheduled run.
The political person gets off and says to the media it was a delightful trip, no hassles etc.
Meanwhile every other bus in the entire city is still running as it always does, sometimes early to each stop so when you get there it is already trundling off into the distance, or it is late, so you stand at a blisteringly hot bus stop with no shelter, waiting, waiting, waiting. A few months later, same scenario, waiting, waiting, waiting, but this time it is winter and you are freezing your toes off or getting soaked by rain. Or both.
Back in Parliament House however, the bigwigs are saying to each other, "I don't know why the people are complaining, I caught the bus to work one day in October, (last century) and everything was fine."

Anyway, let's leave the bigwigs to their rarified existence and focus on something nicer.

There's a new flavour in self-saucing pudding packet mixes.
Actually, there's two new flavours, but I only bought and tried one so far. I don't do packet mixes much, I make cakes and biscuits (cookies) from scratch, but self-saucing puddings are easier from packet mixes. I only buy them in winter and some years I don't bother at all.
I don't remember why I was in the pudding aisle at the shop, but I'm glad I was there to find this.
The other new flavour is chocolate pudding with salted-caramel sauce. 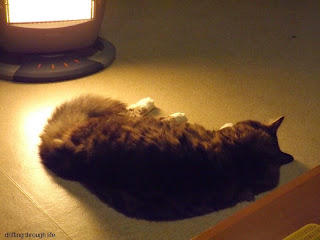