On Wednesdays, Delores, from Under The Porch Light, has a word challenge meme which she calls “Words for Wednesday”.

Delores has been having some computer troubles so our words today come from Elephant's Child and what a selection!

Lately I've been using these word prompts to add chapters to my Jimmy and Rosa story, but I'm giving them a rest this week. Instead I have chapter two of a story that doesn't yet have a title.
Chapter One can be found in my archives, search for Friday February 20th 2015

Saturday soon arrived and just after lunch Mum arrived with Joan following in her minivan. They began unloading boxes and I rushed out to help. Cardboard cartons labelled hats, cloaks, wands, cauldrons, there were so many! I began feeling excited about Sally's party again. Mum introduced me, "Joan this is my daughter Leah," and I saw straight away that Joan and I would be friends.

I called Sally in from the backyard as we stacked boxes in the living room. I'd had a talk with her last night about the problems we were facing and she'd said she understood, but wondered why daddy's boss didn't believe him when he said he didn't steal the money. I'd said that sometimes people tell lies about other people and daddy had just got caught in the middle. Things would get sorted out, but we weren't allowed to use much money while the police did their job.

As we opened boxes and exclaimed with delight at the contents, Joan said "my neighbour Chris has a son, Jason, he's about thirty, he works in children's party entertainment, the company is called "Party Magic" and I've invited him over to discuss things, is that okay with you?"
"Yes of course," I said, "is he on his way now?"

"Yes, he'll be here soon, he lives just two houses away from me, but had to stop for petrol."
Sally was practically jumping out of her skin with excitement, she'd been listening to every word.
When we had every box opened, we moved ourselves to the kitchen for a cup of tea while we waited for Jason. We'd no sooner sat down with our cups than Sally came running in. "Mum! there's a car in the driveway, looks like that one from the Munsters!" 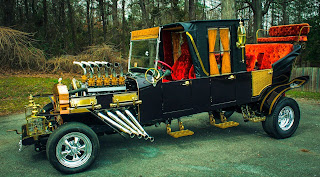 "That will be Jason," said Joan, smiling. "He drives that to all the parties he does, it helps to get kids in the mood for magic, he says. He calls it his Abracadabra Machine and the horn is a Carillon sound, little kids love it."

I let Jason into the house and found hime to be friendly and polite. Sally loved him straight away, I could see he got on well with kids. He asked first how many children were expected and Sally answered, "I wanted the whole class, but some kids can't come, their mums won't let them, and Barry Johnson has got chicken pox, so just my best friends. There's Ann C and Ann B, Maddy, Leonard, Christopher, Sean, Summer, Gail, Michael, he's Maddy's twin brother, and Ricky." She started counting on her fingers. "That's eleven kids and me, ha ha we're a dozen, like a carton of eggs!"

I reminded Sally her party wasn't for three weeks yet, Barry would be better by then, we just had to hope none of the other kids caught chicken pox. That would be a nuisance and would really torpedo the plans. She glowered at me and pretended to growl. "Don't say that mum, you'll jinx us!"

Jason said "a dozen kids is what we call a medium sized party, easily handled." Now Mrs. Patterson, I understand you aren't hiring us to cater, just asking for advice and tips?"
"Yes, we're severely restricted with our budget right now, what I really was hoping for was just someone who could do a few magic tricks for the kids and be happy getting paid with birthday cake."

Sally said," Daddy's in trouble at work and the police said we can't use any of our money except for groceries."

Joan said, "I'm sorry Leah, Alison told me a little and I thought Jason should know from the start you wouldn't be hiring him."

"As it turns out, I can help with that too," said Jason. "We have a storeroom with old party props that don't get used anymore, I'm sure the boss wouldn't be at all reluctant to let me borrow them. I'm working on a new routine with a new assistant and we could use the practise. This could be a training party for her, we sometimes do those for free until new assistants get the hang of things."

"Well, first let's have a look at what you have in those boxes, then we'll know what extras you might need. If we get the props and tricks worked out, we can plan the food to co-ordinate with that. Did you want just wizards or will there be witches and fairies and Jeanie and me casting spells and doing abracadbra moments?"
"That sounds wonderful." I said. "Let me get notebooks and pens and we'll start writing things down."

Joan said, "I have mostly Halloween costumes in the boxes, my kids used them for years in Sacramento, some might be a little large but we can take in seams and take up hems, there's a really sweet little fairy outfit that would fit Sally."
"No No," said Sally. "I'm a wizard! I have a costume already."

Jason asked "Do you have any wands? We could have some of the kids be junior magicians, doesn't matter if they are wizards or fairies or witches, our new routine centers on things going wrong because our wands are bent, junior magicians could be helping to straighten out the 'crooked' spells."

"I have an idea," said Sally. "Like Sleeping Beauty and the poisoned apple, but we could have magicked apples instead and when someone takes a bite they do silly things, like jump up and down until they get a balloon, or close their eyes until they get a jelly bean or something."
"What a great idea," said Jason. "I can see you've got a magician's mind already."

Jason and Joan started pulling things out of boxes while Mum pulled me aside.
"Don't you worry about the food part of the party," she said. "I can buy things like crisps and lemonade and I know a few women who would be happy to bake fairycakes and Maria does wedding cakes for her family and friends, they don't hire caterers, they all pitch in and bake for entire weddings, I'm sure she'll do a birthday cake for Sally, just tell her what the theme is in plenty of time."

"Thanks Mum," I said. "I'm so grateful. I was a bit panicky at first, having to cancel the caterers and the 'magical smoking jellies' and everything else.

"The cake will have to be chocolate," I said. "Sally has been very persistent about that. Every single year, her cake is chocolate. Will you write down Maria's phone number for me? I'll call her on Monday while Sally is at school." 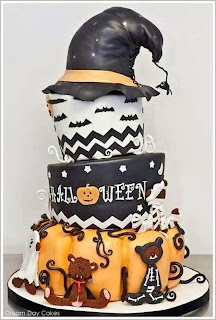 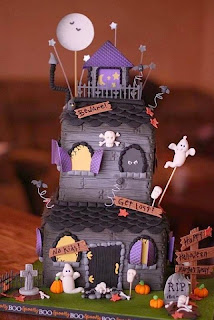