from Daughter of Smoke and Bone by Laini Taylor
"I think I would always find you, no matter how you were hidden. Your soul sings to mine. My soul is yours and it always will be, in any world. No matter what happens."

from A Reason To Kill by Michael Kerr
"There was a temptation to go back inside the store and stretch out in a freezer cabinet to luxuriate among the frozen vegetables."

Last Tuesday, well, the one before that, you know, last week, we had some stormy weather that caused a lot of damage to a lot of homes and also caused power outages in several areas for several hours.
Not a huge problem for me, I lit every candle I owned, ate cold sandwiches for dinner and drank water instead of coffee. That last bit was hard. I really wanted a hot coffee. But the kettle is electric, the stove is electric, you see what I mean? No coffee.
Isn't it amazing how appealing coffee is when you can't get any?

Anyway, the candles were pretty, but I couldn't read very well by them, so ended up going to bed early. I left the bedside lamp turned on, so when I woke at 10+pm I knew the power was back on.

Two days later, I was talking to a neighbour, J, and she said something which was a wake-up call for me. She had a large candle burning on her coffee table, while she was opening her mail and as casually as she always does, tossed the envelope onto the coffee table. It landed on the candle and she threw her cup of water on it to put out the tiny fire.

So yesterday I went shopping and here's what I bought: 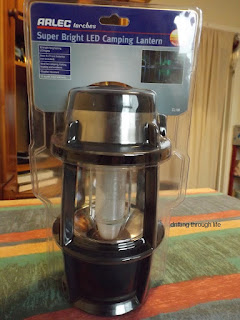 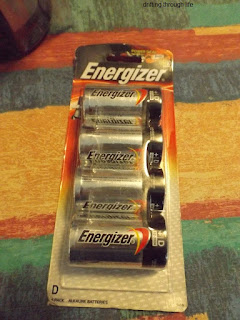 and a pack of batteries, D size. It takes all four batteries, but that shouldn't get too expensive, we don't have power outages too often. 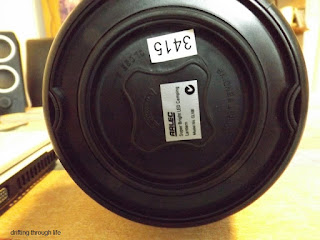 the base which I had to unscrew to put the batteries in, which took forever and I thought maybe I'd got a defective one, but it finally lifted out, 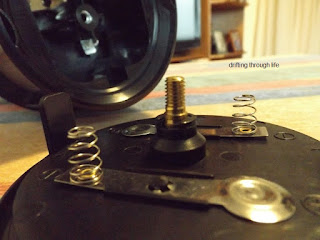 and I discovered the central holding screw was about an inch long, that's why it took ages to open. 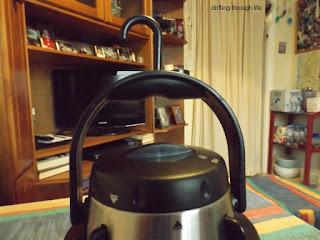 being a camping lantern, it has a carry handle and a little hanging hook, 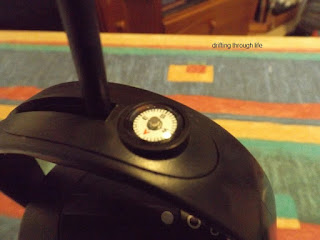 and a teeny, tiny compass! Which I will never need, because if I ever go camping it will be in a five-star hotel. 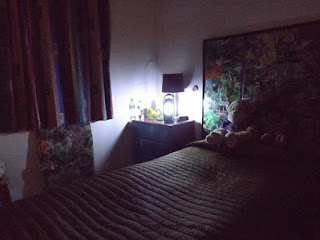 here it is lighting up a corner of my bedroom, plenty of light to read by and much safer than candles, right? 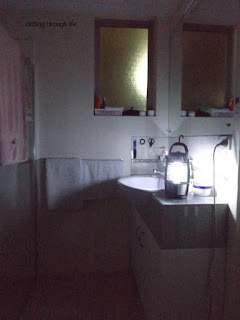 and here it is providing enough light to pee, wash my hands and brush my teeth by.
Oh I'm so clever!


No, this is not a sponsored post, I don't do those. I just show good ideas when I have them.