I've decided to join her.
I've chosen Saturdays to do this.
So here is my beginning, the letter A.

There is absolutely no mention of abacus as a mathematical calculation device.
So I went to see my good friend Google and found a Wikipedia entry about the Abacus.
I've copied a part of it here for you.

The abacus (plural abaci or abacuses), also called a counting frame, is a calculating tool used primarily in parts of Asia for performing arithmetic processes. Today, abaci are often constructed as a bamboo frame with beads sliding on wires, but originally they were beans or stones moved in grooves in sand or on tablets of wood, stone, or metal. The abacus was in use centuries before the adoption of the written modern numeral system and is still widely used by merchants, traders and clerks in Asia, Africa, and elsewhere. The user of an abacus is called an abacist.[2]

As a small child, maybe three years old, I had an abacus, which looked nothing like the one above.
Mine had brightly coloured beads in different colours and I didn't know it was more than a toy.
I just had fun flipping the beads back and forth and making patterns like this one >> 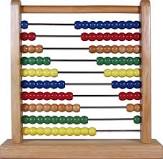 As a mathematical learning tool, I think that the first image is a better type of abacus.

In the second image a similar learning effect could happen if the different colours represented higher numbers. For instance, count twenty beads, then move across a green one. Or something.

I've seen these used in movies, quite large Abaci, standing on a floor, while someone used it for calculating whatever.
What truly impressed me was the speed at which these calculations were happening.

I find the early history of the Abacus quite interesting.
Beans or stones in grooves in sand or on tablets of wood, stone or metal.
I already knew that the Abacus had been in use many, many years before the modern numeral system.

*edited to link to Toni*

a is for A-Z Saturdays abacus calculating counting