On Wednesdays, assorted people have been taking monthly turns at putting up a selection of six (or twelve) words which is called “Words for Wednesday”.
We have taken over this meme from Delores, who had been having computer problems.
This month the meme continues here, at Elephant’s Child with words supplied by Margaret and Sue.

Some of us put our creation in comments on the post, and others post on their own blog.  I would really like it if as many people as possible joined into this fun meme.  If you are posting on your own blog - let me know so that I, and other participants, can come along and applaud.
I’m hopeless at poetry so I always do a story.

This week's words are in fact two photographs which will appear in the correct place in my story.

my contribution this week is Chapter Two, and Three; inspired by the words written by Lee which can be read here in the comment section of Elephant's Child's Wednesday Words post.

Maisie May had been named for her great-great-grandmother and had grown up hearing the stories of the older Maisie’s vaudeville career. Her mother, Katie, still had the tattered, tasseled tambourine used in most of Maisie’s stage routines.

When the elder Maisie passed away, her countryside home had been left to Katie, who hadn’t wanted to live away from the city, so the house had been rented out for several years. Those tenants had now moved on and the house had been empty for almost a year. Repairs were necessary and probably some upgrading too; Katie and Maisie May had discussed this at length, deciding to fix things up and sell the house.

When the school summer break was underway, Maisie May had driven to the old home and stayed in the front bedroom while going through room by room, checking off a list of things that needed to be done.
In the elder Maisie’s bedroom, she had spied a corner of a picture frame peeking out from behind the dresser where it had fallen, probably many years ago.
With surprise Maisie May discovered it was a photo of the elder Maisie, taken at her very first public performance, dated and signed on the back by her father. 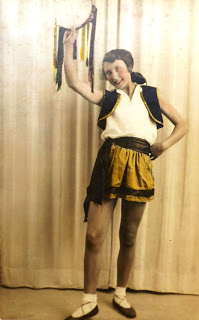 Maisie May dusted it off and placed it carefully into her suitcase. Katie would be very pleased to have it.

As she drove away from the old house, along the track between the trees, Maisie May glanced into the side mirror for one last look. 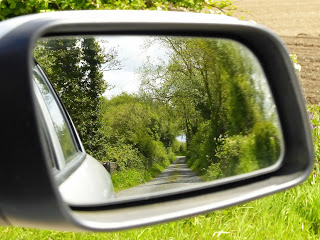 She hoped a family with children would buy the old house and turn it once more into a home, with laughter, singing and dancing spreading warmth through the rooms.