We have taken over this meme from Delores, who had been having computer problems.
This month the meme continues here, at Elephant’s Child’s site, with words and images supplied by Margaret and Sue.

Some of us put our creation in comments on the post, and others post on their own blog.  We would really like it if as many people as possible joined in with this fun meme.
If you are posting on your own blog - let us know so that we can come along and read your masterpiece.
I’m hopeless at poetry so I always do a story.
It’s a fun challenge…why not join in?

This week's words are, once again, not words, but two images, which you will see as you read through my story.

I was twenty-four years old and taking one last holiday before settling down to work in the family business. Real Estate. I'd passed the exams and had my licence. The business had been started by my great grandfather, Earl King and King's Real Estate had recently won several awards.
But selling houses was in my future.

Today, I was sweating in the jungles of Brazil, following a guide as he took me along a little known trail through the greenery. Brilliant flashes of colour were seen through the trees as birds took exception to us invading their territory and flew away to distant trees. There were just the two of us, the guide, Jimmy, and me, Ben.
His real name was unknown and he was a tiny, wizened, little old man, who communicated with gestures and grunts, with wide, wide, smiles whenever I understood what he was trying to tell me. He looked like he'd lived forever. His hair was heavily streaked with grey and decorated with brilliant turquoise and gold beads, matching the ropes of beads circling his upper arms and ankles.

I'd been the only one in the tour group to sign up for this "wild trail walk". It was rumoured to be inhospitable, with little drinking water along the way, and no 'comfort stations', as were found along the more common trails. Jimmy would take you along trails "never before travelled by white men", all you had to do was keep him in sight at all times.The rest of the group, most of them older, a couple of them retirees, had decided to play safe and stay within sight of the holiday huts for the last few days of our month long holiday.

There was little information in the usual brochures, a few sentences only, stating that there was a lost castle somewhere in the jungle. It hadn't been seen for centuries and legend had it that only a direct descendant of the original family would ever be able to find it. My curiosity had me putting my name to the sign up sheet immediately.

We'd been walking for two days now, Jimmy and I, with the sun invisible through the dense canopy, but the heat of it keenly felt. I'd removed my shirt and Jimmy had rubbed my exposed skin with a particular thick green leaf, after that the mosquitoes had left me alone. We'd spent the previous night in a shallow depression next to a giant fallen trunk covered with bright green mosses and vines.

As the day began to fade, Jimmy appeared to be in a hurry and I had trouble keeping him in sight. I called to him to wait and sped up a bit myself, but as I rounded the giant tree roots I'd seen Jimmy disappear behind, there was no sign of the little man. I stopped and looked carefully, listening too, in case I heard him. I heard nothing, even the birds were now quiet and with deepening shadows, I had no hope of seeing Jimmy. I decided to sit and wait. Surely Jimmy would notice I was no longer behind him and would come looking for me?

Hours passed with no Jimmy and I eventually fell asleep, waking in the early dawn to find myself still alone. I wasn't sure what lay ahead, so began walking back along the trail we'd been following. Within minutes, I was lost. The trail just didn't look the same as it had, I recognised none of it. There were forks where I hadn't seen any the day before and I heard the trickle of water somewhere off to my left. Water seemed like a good idea, if it was drinkable or not, at least I could wash off some of the sweat. I turned left and followed the faint trail leading up the slope.

I briefly speculated about Jimmy, where had he gone and why had he abandoned me? I wasn't very worried, he knew this jungle better than anyone, or so I'd heard. I was however, a bit worried about myself. What if no-one came to look for me? How would I get home? How would I survive?

Reaching the top of the slight slope, I found myself in a small clearing and off to one side, visible through the trees, a building. 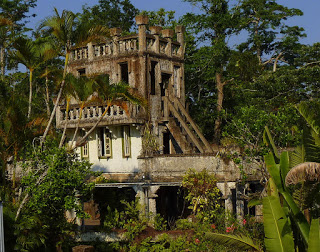 I'm sure I stood for several minutes with my jaw hanging open. A building! A very large building! Well, the remains of one anyway. Had I found the lost castle mentioned in the rumours? Surely not, that was only to be found by a direct descendant of the original family, if the tales were true. I was pretty sure I wasn't, my family had lived in Louisiana for generations. Four of them at least, since great-grandpa Earl had started the real estate business there.

Grandpa, Earl Jnr, had often told me the tales of how Great Grandpa had bought two run down houses when he first arrived, one little more than a shed. "He lived in the one, Benny," grandpa would say, "and fixed the other one up real nice, then sold it for enough money to buy two more run down cottages." The rest is history, as they say.

But now I began wondering where Great Grandpa Earl had come from. The roots of the family were lost, there was no paperwork, none that we'd found anyway,  and no relatives other than grandpa, Earl Jnr, my father, Sam, and Uncle Ray. There was family on my mother's side, of course. They'd been in Louisiana for centuries, and had been high-value slaves before the civil war. 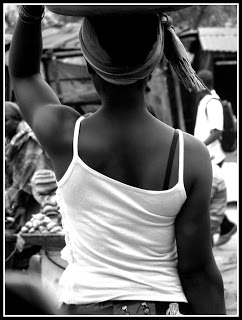 But where had the King name come from? Was I a direct descendant of the king who had once owned and lived in this lost castle? I forgot about Jimmy, forgot about rescue, forgot about home, as I walked towards the castle remains.