is this the oldest water heater in the city?

July 13, 2012
When I first moved in here I took photos of the old water heater in the communal backyard area.
Then I lost them.
So I took some more.....as you do.
Recently the heater has been leaking, with the ground around it staying damp for up to three meters.

It's a huge storage tank, three of me would easily fit inside it, and it services all of the four flats in my building. 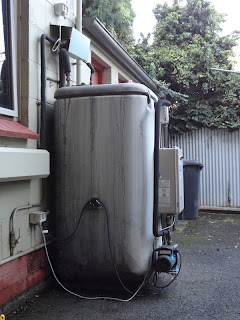 It's an odd looking thing, pipes and electrical cords all over it. 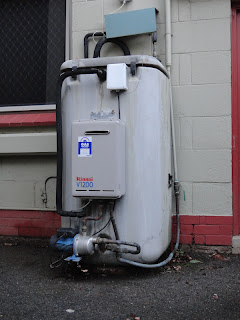 I'm not sure of the original heating source, but it is now gas heated with an electric pump that stirs the water.
Why? Who knows? All I know is the pump runs 24/7 and is quite noisy. 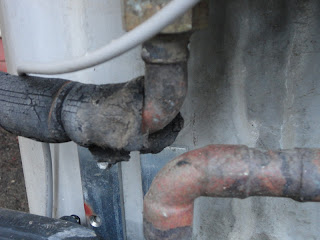 Some of the old pipes. 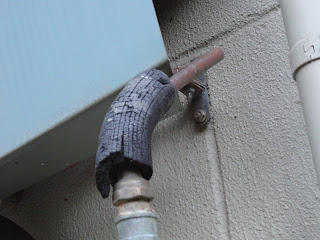 The rubber hosing is looking very weathered and worn. 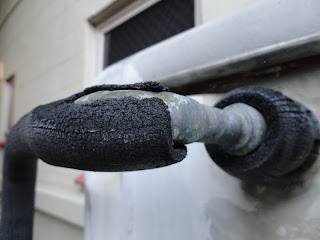 Another section of hosing. You can see the pipe it is supposed to be protecting is beginning to corrode. 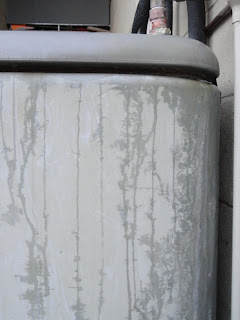 Water dribbling down the sides of the tank. 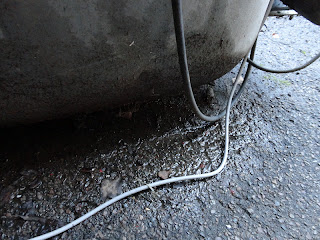 See all that water on the ground? See the electrical cords lying in it?
The dampness spreads all the way to the washing line and almost to the fence.
Somewhere to the left of these electrical cords are pipes, one of which had sprung a slow leak.
I thought the damp was from overnight rain which hadn't dried up yet, then as it continued to stay damp, I thought is was overflow, since there was always dribbles of water running down the outsides of the tank.
Eventually someone called a plumber who discovered the leaky pipe. 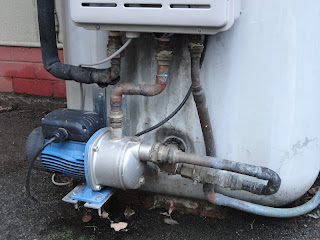 Here's a close-up of the pump. The plumber said it was used to stir up the water, but I can't see why that would be necessary. I think the pump has more to do with maintaining the pressure of the supply to the individual flats. 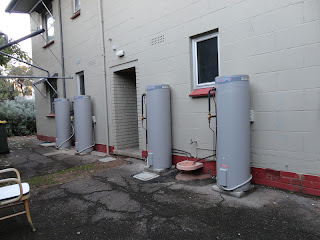 I haven't walked behind every single block of flats, but it does appear that mine is the only one to still have this older, shared water heater. All the others that I've seen have the individual heaters shown above.
I'm not sure if there are plans to convert my block. It seems like this would be a good idea, but there's a lot of time, work and money involved in such a conversion.
And there may not be enough space to locate them.
In the above photo, you can see two heaters either side of the central access doorway which has the stairs to the upper flats. This block is the "T" that comes off my block.

In "my" block, the left of the access doorway is my closed in back porch which backs on to the end of the lower right hand flat you see here. To the right of our doorway is the water heater, then two small rooms which used to be outdoor shared laundries. These are now filled with junk. So space is an issue.

But as long as I am still able to run my washing machine and have hot showers, that's fine.