my gosh it was windy!

December 29, 2012
I had a fabulous day, got on the bus this morning, stayed on as it passed through town, going through another suburb my younger son and daughter got on too, then we rode the bus all the way to Glenelg beach.
It's so handy having a bus that goes right across town like that.
At the beach, we three met up with other family members for our Christmas lunch get together.

We sat on the grass eating fish'n'chips while listening to the commentator as he described the races going on down on the sand. There was some sort of competition where contestants in various age groups ran around a course, swam a short distance, and waded through thigh high water.

After the competitions were over and people were leaving the area we took a walk along Glenelg jetty. It's a lot shorter than I remember and there are no splintery boards to walk on, it has been surfaced with asphalt now.

We reminisced, K and I, about the first year we were back in Adelaide, when the two younger ones (K and J) waited with me on the sands while Dad, M and T took part in the annual City to Bay Fun Run.

J dug a groove in the sand and sat in it, then pulled the sand back over his legs so he looked like he was buried up to the waist, K built a castle with a moat and spent time running back and forth between the moat and the sea with a small plastic cup trying to fill the moat.
They were about 9 and 5 years old at the time.

As we walked along the jetty the gusty wind felt colder coming across the water than it had been while we sat on the grass, so we didn't linger long, just walked to the end and then straight back again.

Just look at what the wind did to my hair! 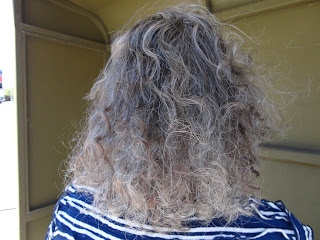 Turned it into a witch's wig!
And look at all that grey!
I don't see that when I look in the mirror, my eyes seem to focus only on the brown, so it's always a bit of a shock to see myself in photos now.
K took this while we waited for the bus to go home again, J had left us to meet with some friends at a pub.
I hoped I'd manage to stay awake on the way home. After a day in the sun I was fairly sleepy, and lately I've been falling asleep on my way home from work and that's a much shorter trip! Waking up and getting off four or five stops past where I should have got off, then walking back home from there isn't much fun.  I've done it three times this month.
Granny napping on the bus!

I made it home without falling asleep, but I did have a nap as soon as I got home.