Kath and Andrew often join in as well.

I usually go with a theme for my Sunday Selections and this week I'm featuring a building.
A very particular building.

Kath, stop reading and get a box of tissues before continuing. 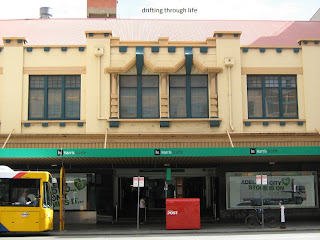 Our old Harris Scarfe Department Store building. This is the Grenfell Street facade. 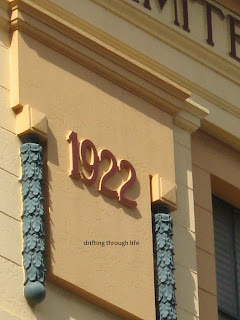 built in 1922.  Rundle Mall facade.
I wasn't around back then, but I'm sure this store was the very finest in shopping experiences of the day. 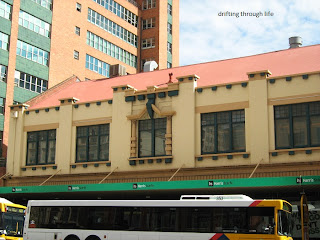 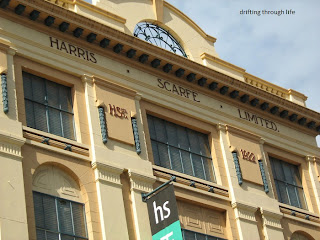 Jut look at that detailing, nicely done without being ostentatious. A fine looking building.
This is the top floor of the Rundle Mall facade.

The store featured lovely wide staircases next to the elevators for those who preferred to ride up, and in later years escalators were also installed.
I used to love the old, old floorboards on the upper levels. 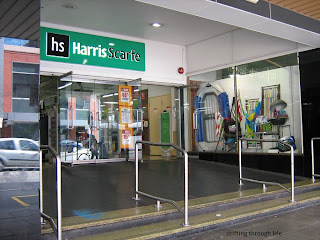 The central set of doors in the Grenfell Street entrance.  This faced a bus stop and the steps were a popular resting place for school kids and bags as they waited for their buses after school. 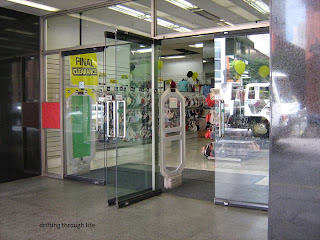 Another of the Grenfell Street entrances. 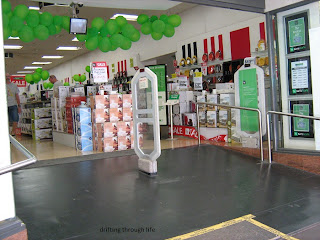 One of the Rundle Mall entrances. See all the balloons? The piles and piles of boxed goods?
Sale! Sale! Sale! 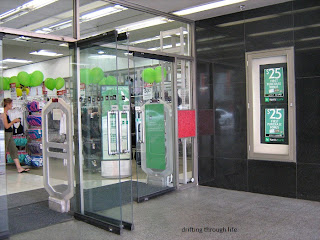 Another of the Rundle Mall entrances, with more balloons.

Over the years there had been a couple of modernisations, upgrades, until the store had a variety of styles, none of which really married well with each other.
This didn't stop people from shopping there of course, many loyal patrons continued to buy their sheets and towels, their fine evening dresses, kitchenware, their kids Christmas toys at our
South Aussie icon, Harris Scarfe. 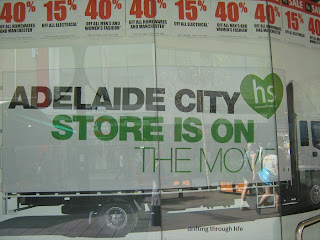 Here is the reason for the Sale! Sale! Sale!
the store was on the move... 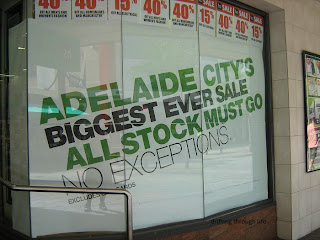 the store was closing down.

Stock was 40% off, later things were marked at 50% off, 75% off.....and more.....stock was practically walking out the door. People bought and bought.
As the sale continued and prices were reduced even further, all floors became very crowded with bargain shoppers. Checkout lines were longer than the Murray River! Staff did their best to see that customers were served as quickly as possible with minimal fuss and you know what? All customers, without fail, were calm and patient while waiting in those long, long, lines. These were loyal Harris Scarfe shoppers and they were supporting their store. And grabbing a bargain or four too, of course.
Just like me.

Stock was moved to a small upper level section of another Rundle Mall store, a limited selection of goods in a much smaller area. 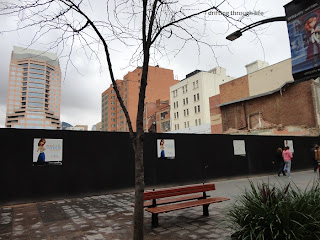 A few short weeks later, there was just an empty space where this wonderful old building once stood.
A surprisingly small empty space........