I had a fabulous time, saw so many things I couldn't take it all in.
Which just means I'll have to go back again.....

I arrived back home last night, the plane touched down at 9:15, and it was raining just as I expected it would be.
My daughter and son-in-law were waiting for me and drove me home.
I'd planned on pushing the suitcases into the laundry and leaving all the unpacking until this morning, but I couldn't settle, so got busy putting everything away or into the laundry hamper and finally went to bed at midnight.

I love flying, but gosh it's good to be home.

Now I have to sort through all the photos I took, as well as catch up on all the blog reading I've missed, not to mention a couple of dozen emails.

Here are a few photos to start with, the Quokkas on Rottnest Island.
They're nocturnal creatures, so I wasn't expecting to see many, but there were a few around. 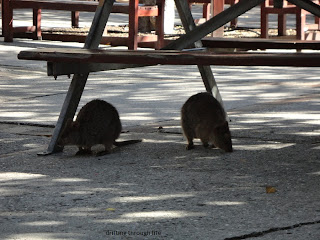 Quokkas have no natural predators on the island, so they don't know fear. These two have become quite tame and happily move about around the tables by the shops where people sit and eat. They even allow themselves to be petted a bit.
There are others that do this, I've heard, but it was close to midday, so they were probably all sleeping somewhere. 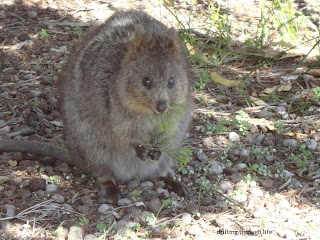 They eat the foliage from the scrubby trees, so as we walked around every time we saw some Quokkas, my brother R would break off a sprig and toss it to them. This one looked at us as if to say thanks before he (she?) started eating the greenery. 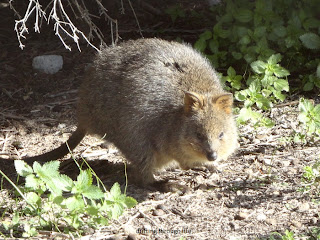 Here's another one that looked right at the camera for me.

You can see clearly that their tails are smooth, without any fur. This led the first Dutch visitors to believe they were giant rats, which is why the Island was named Rottnest, which means rat nest. 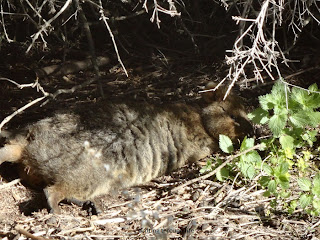 This one was too sleepy to bother with eating or even looking at us.