market day...what I saw, what I bought

February 24, 2014
As you all remember, last Saturday I went wandering down to the Fullarton Community Centre where the annual plants, arts and crafts market was on.

I remembered the first time I went, it was quite a small event, a few tents and stalls laid out in the carpark.......this year it was quite a bit larger. Actually a lot larger.
It took me at least an hour to walk around looking at stalls to see what there was, I had a bit of a look at stuff, then I did a slower circuit and really looked, especially at the book stalls. There were only two and as I looked through the books on offer I was surprised by how many I had already read.

I didn't take my granny trolley as I wasn't planning on buying anything or maybe just a small thing or two....

There were many, many stalls with jewellery, some homemade and very nicely presented, some that looked a lot like one of those glittery Asian stalls at Central Market had uprooted itself and settled in the carpark, several bakery stalls, one with fruit pies such as cherry, apple, apricot, but the pastry looked very solid, thick and chunky, (my mum would have said chainsaw pastry) I doubt my teeth would have been able to bite through it, so I didn't buy any.
Plenty of stalls with cards, ribbons and little things of the scrapbooky type to make greeting cards or something, I didn't look closely as I'm not interested in those.

Another stall had these.... 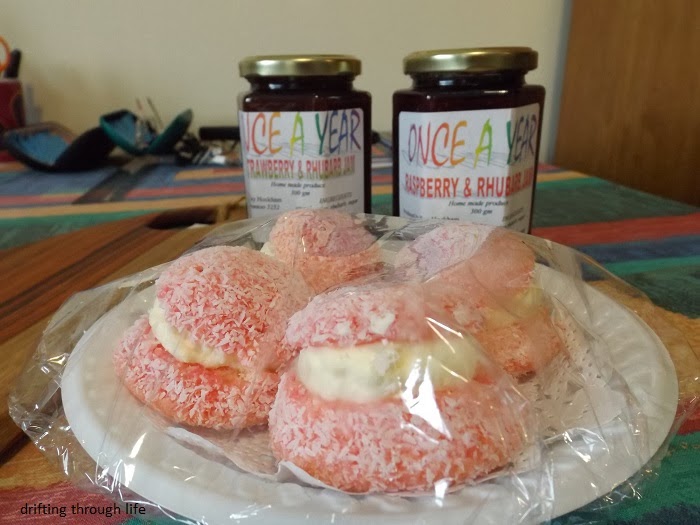 jelly cakes!! I haven't seen these in yonks, so of course I bought some, they were sold as you see them here, a plate of four for $5. I ate two with a cup of coffee straight after taking this photo and hours later I was still picking coconut out of my teeth, but it was worth it. These were freshly made, with real cream. So yummy!

Behind the jelly cakes you'll notice two jars of jam... 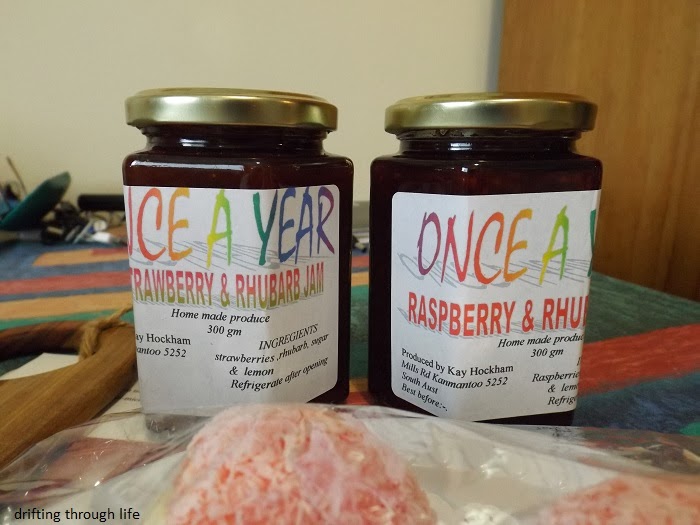 strawberry&rhubarb and raspberry&rhubarb...woo-hoo!! I've been looking for home made raspberry&rhubarb since the jar I bought at Semaphore one summer was so very tasty. I think this might be from the same people, but I can't be sure. Anyway, I overheard the woman telling another customer this would (might?) be their last year at the market...so I bought both jars of jam instead of trying to choose between them. The raspberry seeds will cause me grief, wonder if I can strain them out?

It was very cloudy when I left home and I'd expected it to stay that way, but the sun had come out while I was browsing, so I tried to stay under shelter since I didn't have my hat with me, I briefly thought about buying one from one of the stalls, but I have three, so...no.

I found a stall selling hand-made-from-camphor-wood chopping blocks in assorted shapes and sizes, they had a box with "rejects" that were marked down, so I rummaged through and they all looked fine to me, I could see marks that meant they weren't perfect, but I've seen worse in shops like K-Mart.....then under a few I found this.... 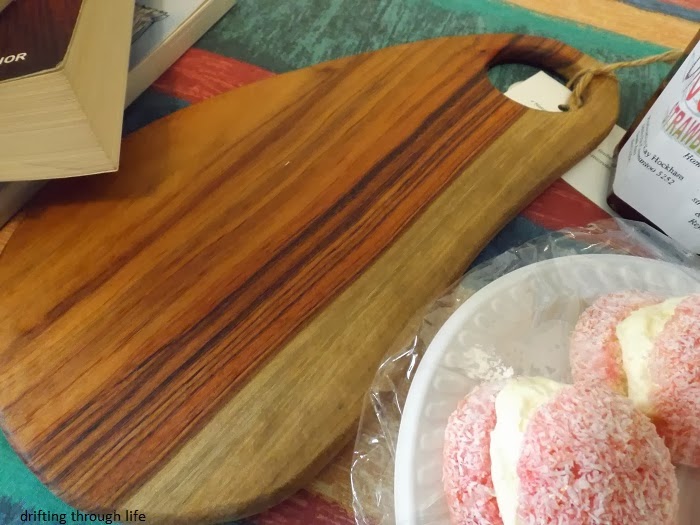 cute little chopping block/cheeseboard/slab of wood....30cm long and only 15cm at its widest point.
My hands wouldn't put it down!
I had to have it.
It lives now beside my computer, the perfect resting place for my coffee mug.
When I flip it over...... 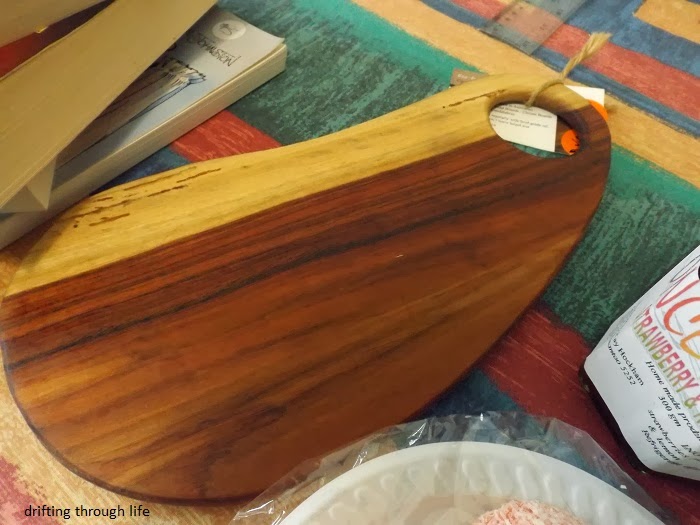 it looks totally different.
It's very lightweight, only 1cm thick.
The seller recommended I oil it a couple of times a year with a vegetable grade oil such as grapeseed, I asked will olive oil do and she said okay, but I haven't done that yet. It will enhance the colours and protect the wood, but since I'm only using it for my coffee mug and not chopping anything on it I think it will be fine. I've never oiled a chopping board in my life.

I looked at a few clothing stalls, slowed down as I passed the sausage sizzle and breathed in deeply, I love the smell of onions on a barbecue!

I walked really slowly around stalls that had potplants for sale, I wanted to buy so many of them, but have no place to put them, my front porch is tiny and too hot.

I started getting tired after my knee went painfully clicky for the  umpteenth time, so decided to head home. Besides, the books I'd bought were feeling heavy. The jam too. 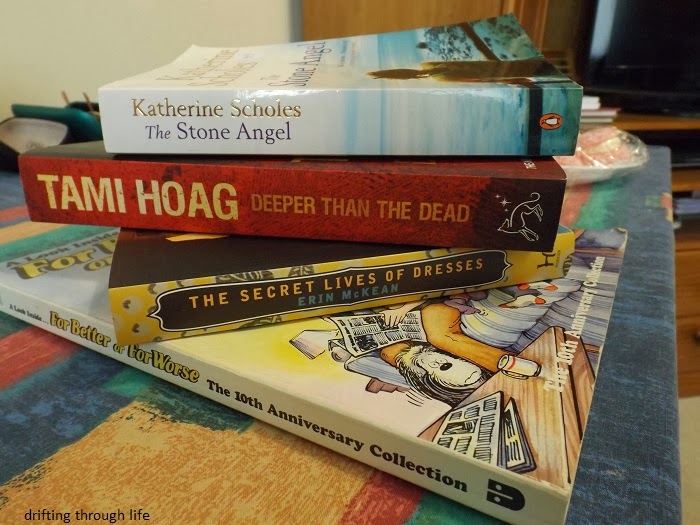 aha! A Tami Hoag that I haven't read yet, Deeper Than the Dead, (there's probably lots of Tami Hoag's that I haven't read yet), The Secret Lives of Dresses,  by Erin McKean, hadn't heard of her either, but I'd read about the book in a newspaper review a long time ago, The Stone Angel by Katherine Scholes, I've never heard of her...the story is set in Tasmania and a 10th anniversary edition of For Better or Worse cartoons in excellent condition.

Altogether a fantastic day out and I will do it again next year.