I usually go with a theme for my Sunday Selections and this week I have my garden again. 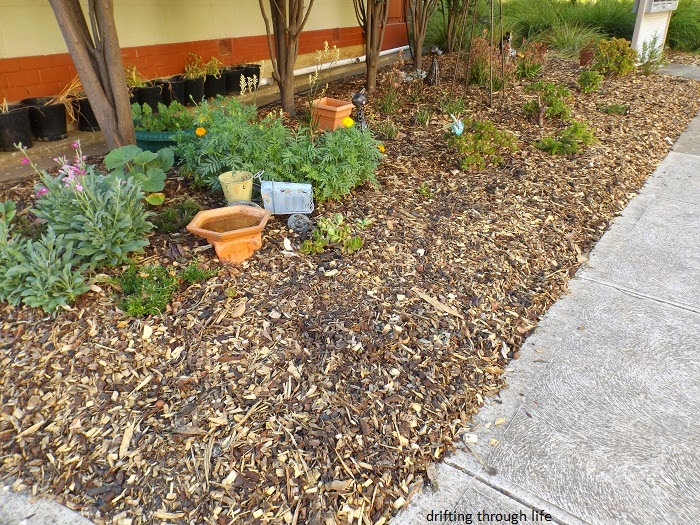 all the garden beds within the grounds have recently been mulched, this is something that happens every year. All my pots of bulbs were moved, so now I don't know which contains what, and several small cuttings have been lost under the mulch. I know where they were, but I just can't find them. 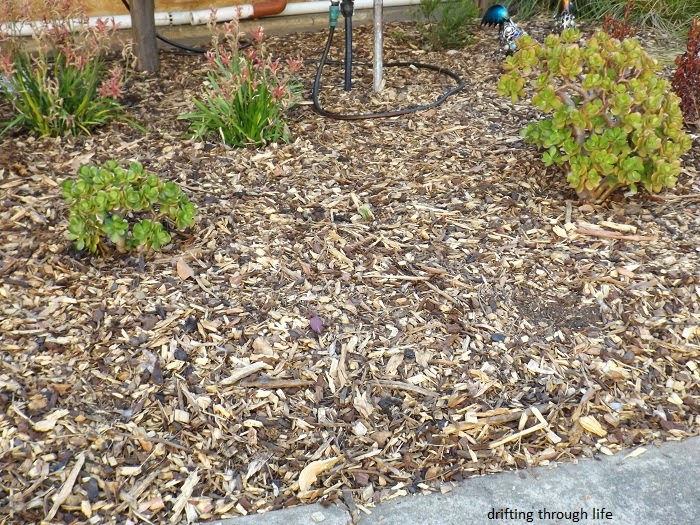 I planned on putting a couple of garden chairs in this empty space for older people to rest on their way to and from the shop. The mulch is fairly high though, so maybe a couple of non-slip pavers as well. Eventually. Next year. 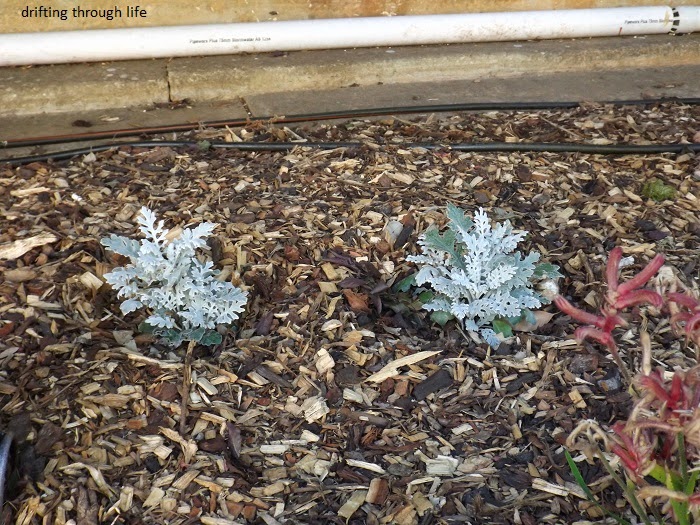 a couple of newbies, cineraria silverdust. 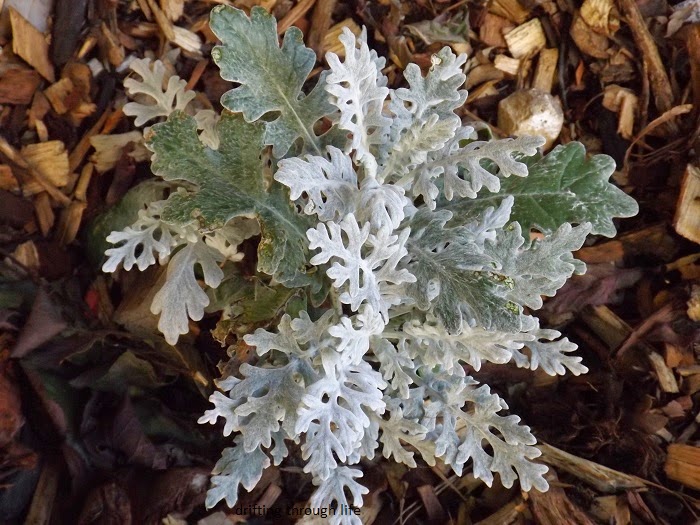 according to the label these will grow about 60cm high and have clusters of yellow flowers in the spring. 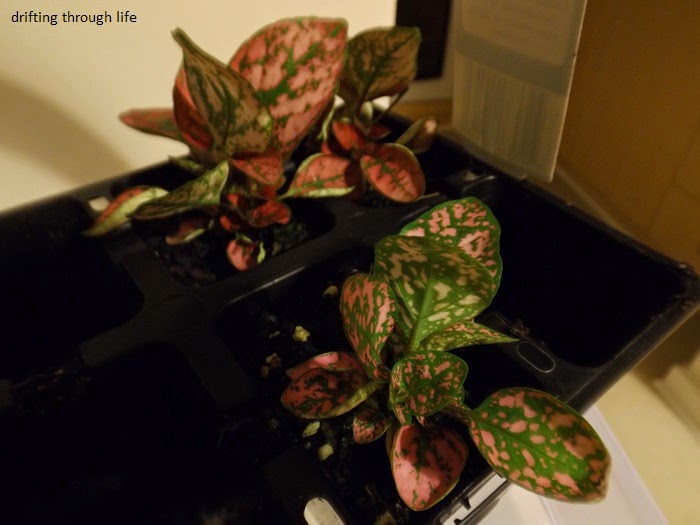 my neighbour P brought me this half empty punnet of what I call freckle plants, she has planted three in the section of garden by her flat. 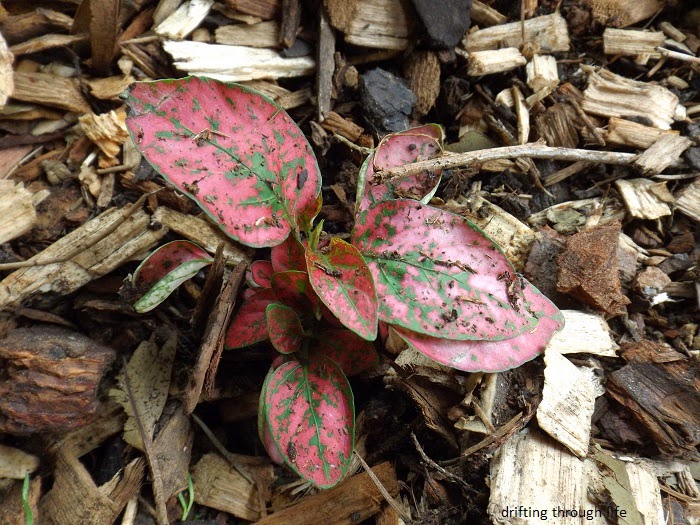 so of course I planted them. Two are mostly pink with green splotches, 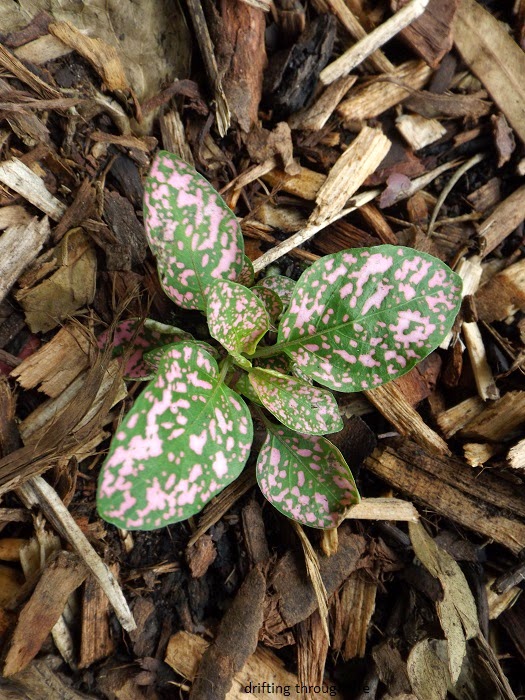 the third is mostly green with pink splotches.  they are a fairly small plant not growing much past my ankles, little rounded mounds of colour. 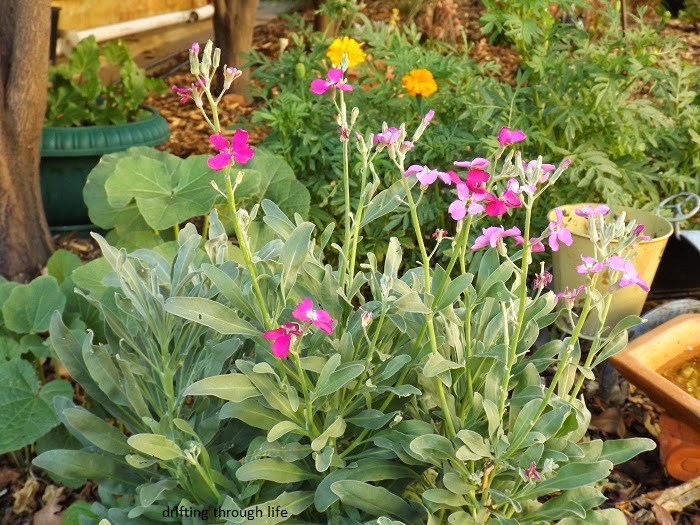 my stocks have started flowering 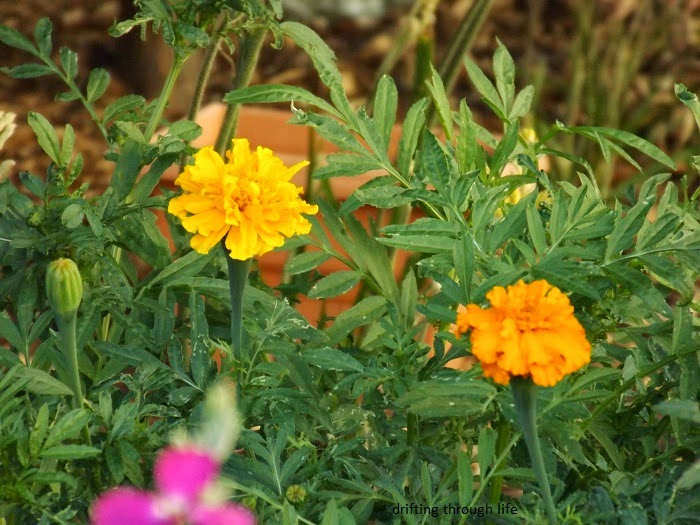 and the marigolds have too, 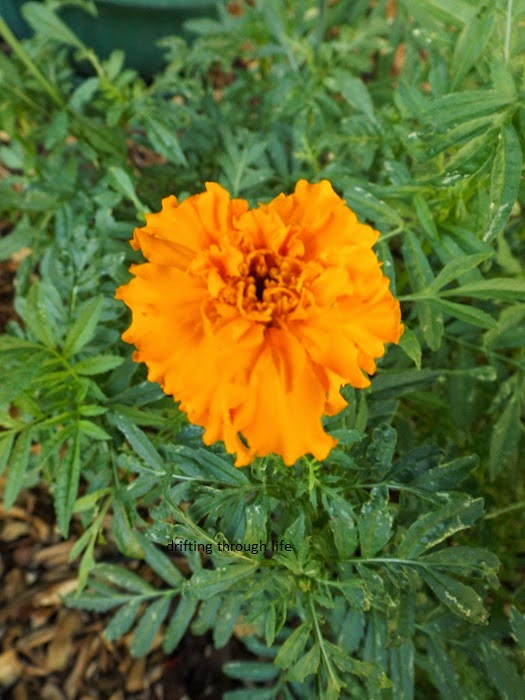 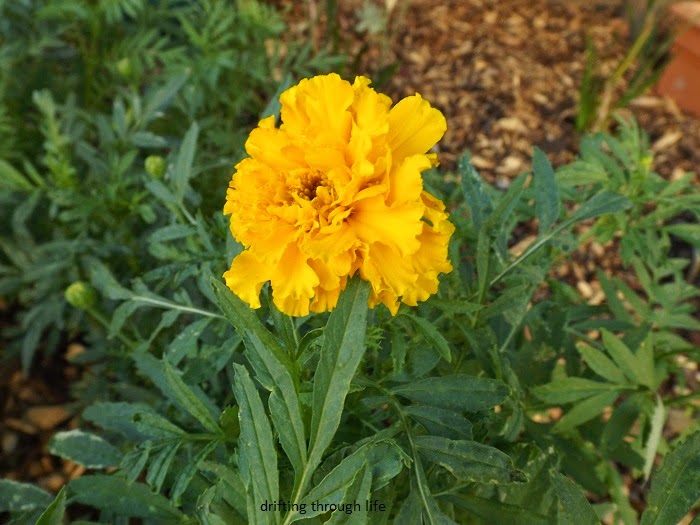 and yellow. These will self seed if I let them and keep coming up year after year. 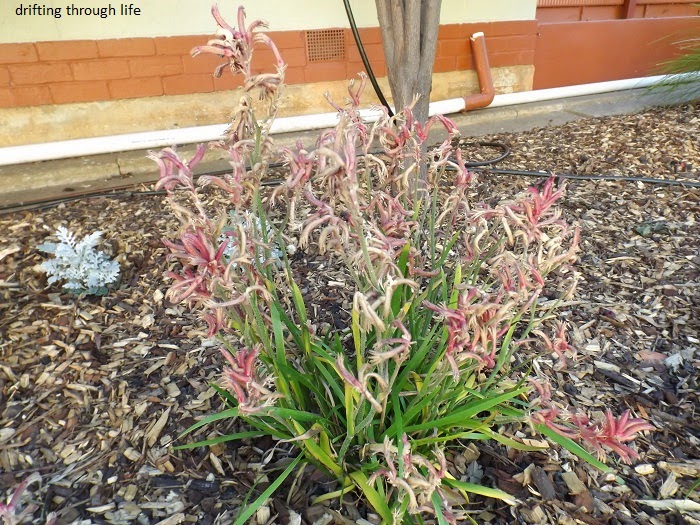 the flowers on the kangaroo paws, (all of them) have died and I should cut them out to allow new ones to grow, I'll get around to that soon. I cut back my daughter's kangas and she has a lovely new flush of flowers on them, but the new flowers were already showing when I did the cutting, so maybe I'll wait a bit longer and see if mine do the same. 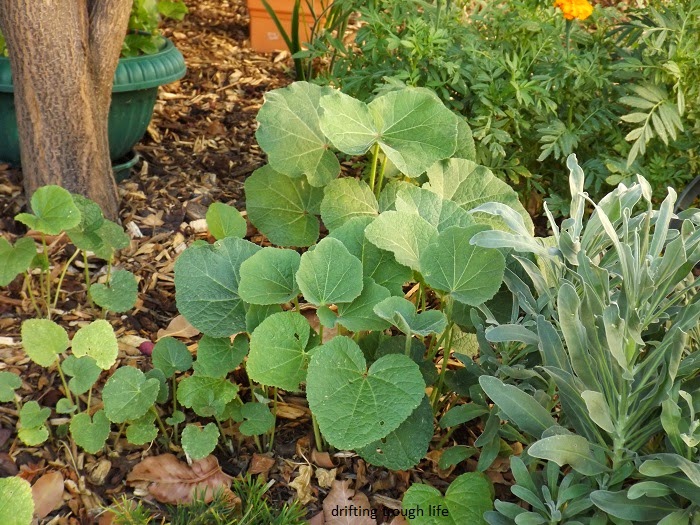 my hollyhocks aren't as tall as they should be, you may recall me saying I planted them too late in the season, but they're growing still, so I have hopes of flowers eventually. 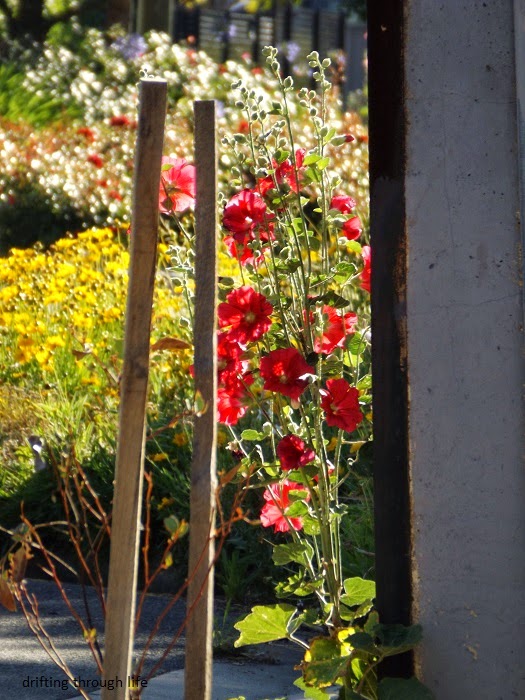 the hollyhocks in the footpath garden a bit further down the road are as tall as me and flowering well. 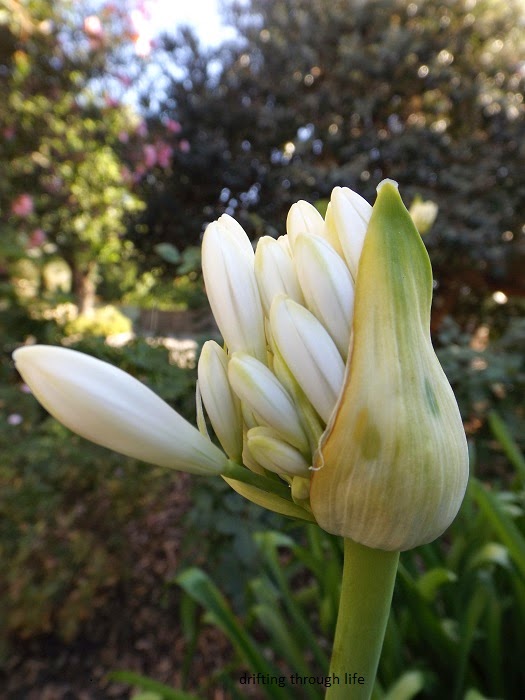 in the front garden bed the agapanthus have begun flowering. 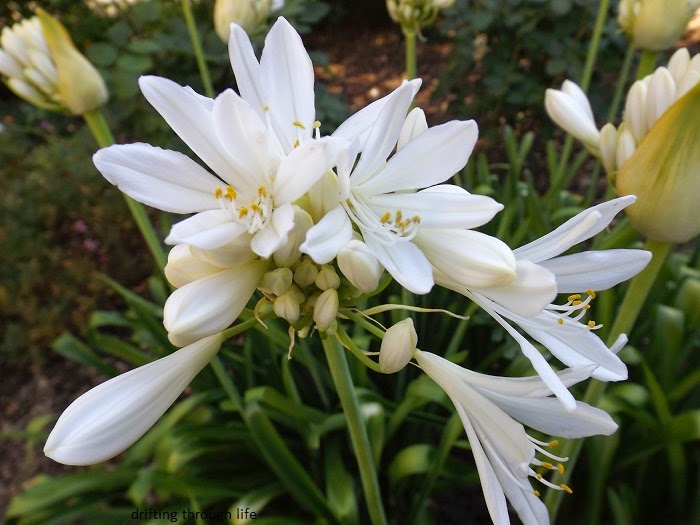 this garden bed is the only one with white agapanthus 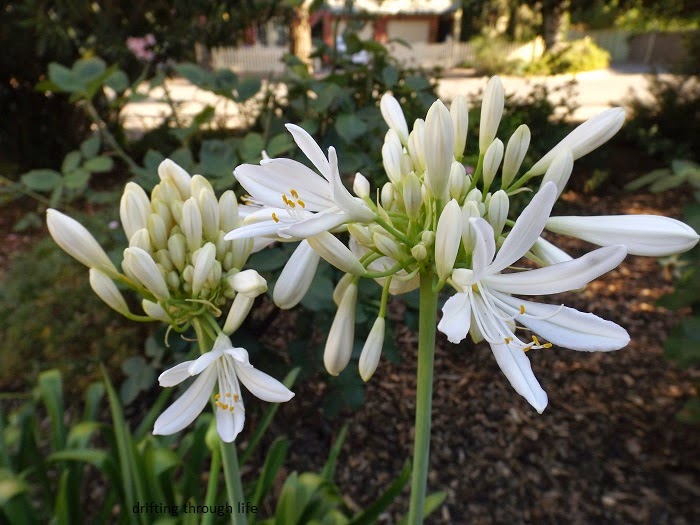 I like these better than the more usual purple, which some people call blue. The same colour as our wonderful jacarandas. 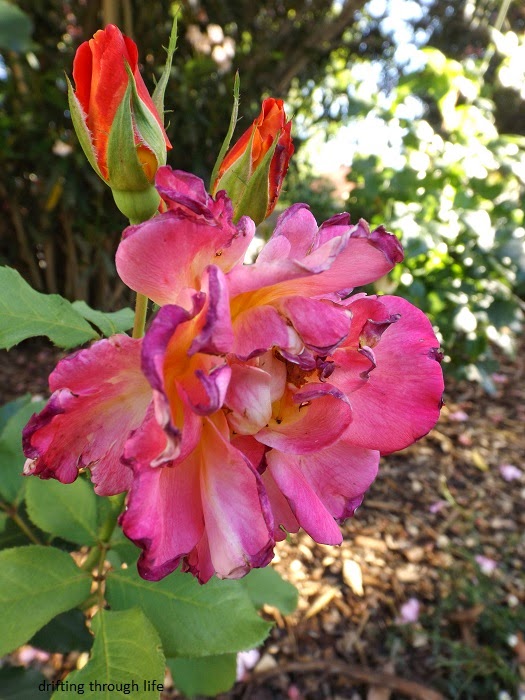 twin buds ready to bloom above a dying rose 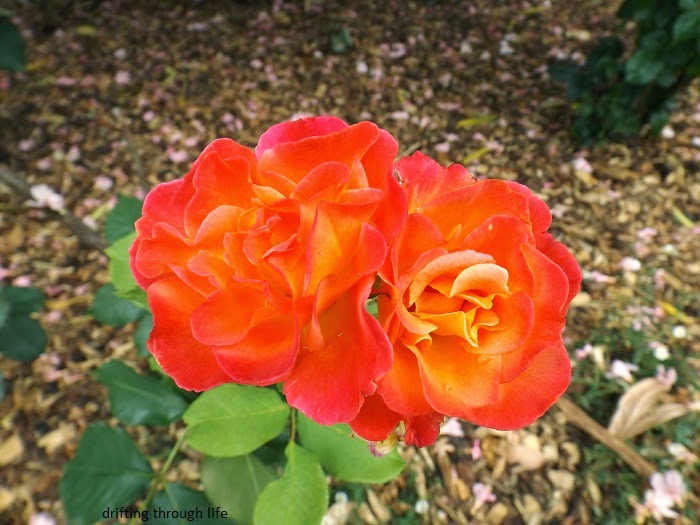