"The occasional night when the loneliness ached so badly that it made you weep. The occasional gathering during which you wanted to escape to your empty apartment so badly you were willing to go out the bathroom window."
The above quote is from one of the Harry Dresden stories, but I can't remember which one.

Today is boxing day; when I was little I learned this was the day when the boxes from Christmas gifts were flattened and stored for future use, or if they were the decorated type made from sturdy cardboard with a lid, they were stacked inside each other, lids on, to save space, and stored to be used again.

I have some of these decorated boxes, they hold many of my tree ornaments, plus ropes of gold and red bead chains.
I didn't receive them with a gift inside, as I've seen on old movies, but found them on sale for less than half price in a hardware/kitchenware/furniture store several years ago. Each box has Christmas scenes on the sides and the lid has a matching scene.
I remember many movies where the box had a ribbon tied around it, when the ribbon was untied and the box lid lifted off, so many times a puppy or kitten would pop its little head up and the child recipient would squeal with joy.

Modern movies have people handing things over in gift bags instead with just a bit of fancy coloured scrunched up tissue paper covering the gift inside the bag.
An easy method for those who aren't good at wrapping I suppose, but I love gifts that are wrapped with lovely papers, ribbons or bows attached. Glittery, shiny, plain, multi coloured, doesn't really matter, the fun is in the opening. Who cares if the gift isn't professionally wrapped? Wrinkles, creases, too much sticky tape, all add to the fun and joy of opening.

Some people open carefully so they can keep the paper and enjoy looking at it, others keep the paper to be used again the next year (my mum...I can hear her now, "don't waste it, it can be used again"), children tear into it and toss it aside in their hurry to see what's inside. No boxes to be stored there.

I've heard also that boxing day is referred to as such because that is the day many gifts are packed back into their boxes to be returned to the store for refund or exchange. This seems a little sad to me. Someone goes to a fair amount of effort to choose, wrap and give a gift, then the recipient takes it back for something they really want?

I'm guessing this is one reason why giving money instead of a gift came about. Why bother choosing a gift when you know it will be returned to the store?

When my kids were little, half the fun was watching them unwrap the things I'd chosen, same with grandkids.
Now, I give gift cards, which equal cash, mostly because I don't know what my adult children and grandchildren want or need, they seem to already have everything, also because in the after Christmas sales, the monetary value of these cards can almost double, so if they are choosing clothes or kitchenwares, they'll get more. Two t-shirts for the price of one for instance.


In other news, I've had a letter to the newspaper published!
Just the local Messenger, the free weekly paper.

There's been quite a few letters written there lately about people not picking up after their dogs.

Other letters then reply with excuses such as "there were no free council supplied bags left in the dispenser so I couldn't pick up my dog's waste." Or words to that effect.

After reading several weeks of these weak excuses, I got annoyed with these people and wrote my own letter. Told them where to go! 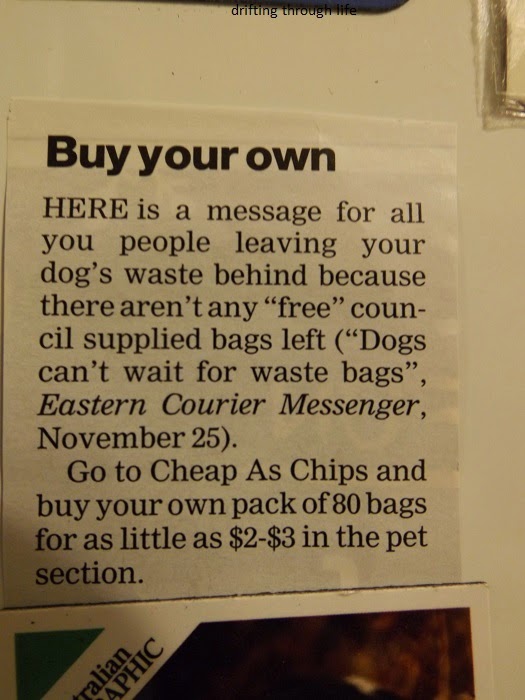 Cheap as chips!!
Buy your own bags!
Why rely on the council to supply "free" bags for you?
(They're not free, the money comes from taxpayers. That's you and me. And I don't even own a dog).

Be responsible and provide your own bags.
Any bag will do.
Just pick up the poo and put it in the bin.