Kath and Andrew often join in.
There are a couple of other participants too:
Jackie K at Working Through It
Gillie at The View from Here

I usually go with a theme for my Sunday Selections and this week I'm continuing with some photos of the garden I'm making alongside my flat. 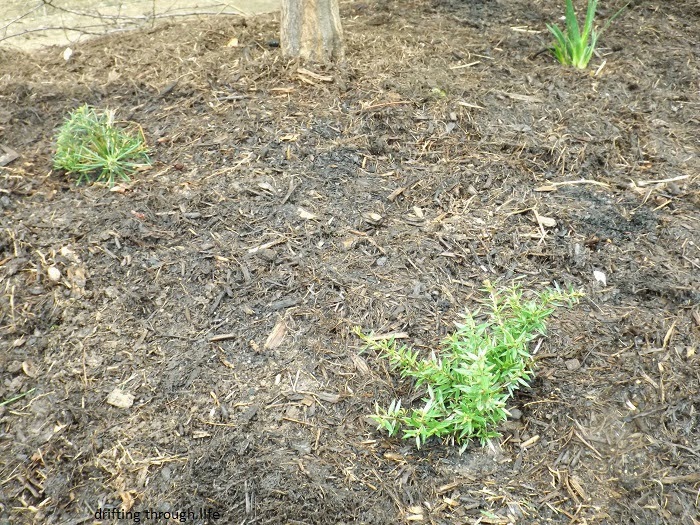 the first few things planted, Banksia "Birthday Candles" on the back left, a Kangaroo Paw "Bush Gold" at the back right and the Grevillea "Apricot Tingle" in front. 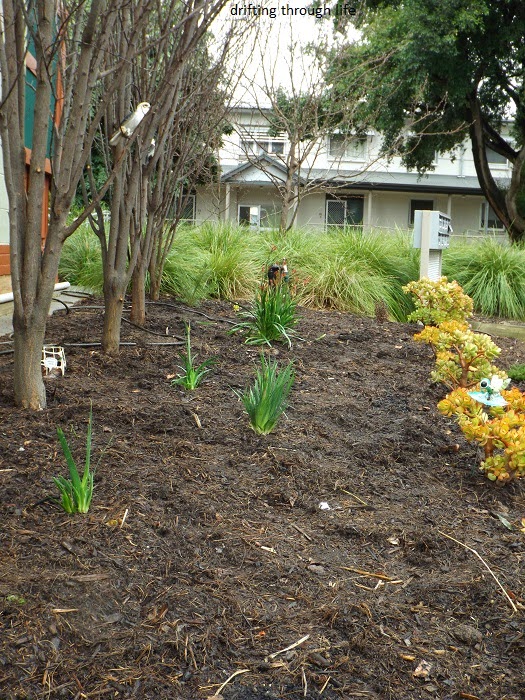 here you can see the Jades in a row along the bed, there is about 75cm between them and the path, I hope that's enough room. The large greenery at the back is the softer grasses in front of the flats behind mine. The new green things in this bed are three varieties of Kangaroo Paw, "Bush Gems", "Bush Dance" and "Bush Volcano"  differing heights and flower colours, but essentially the same plant. Do you see that tiny white plastic frame behind one of the trees? It is sheltering two teeny tiny apricot trees growing from seeds I dropped there last year. They have now been moved into a pot on the porch and two more seeds have been dropped into it also. I saved the seeds a few years ago from the best tasting apricots I ever had. 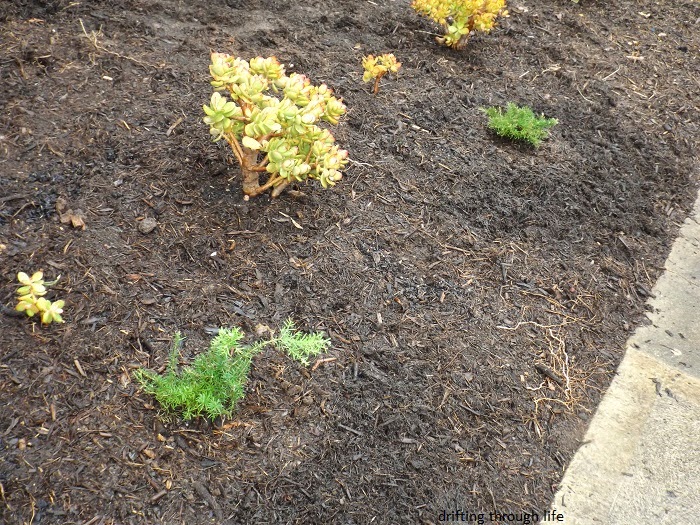 in front of the jades, I moved the remaining grevillea groundcover that didn't get stolen, plus another of the same type that I hadn't planted yet. 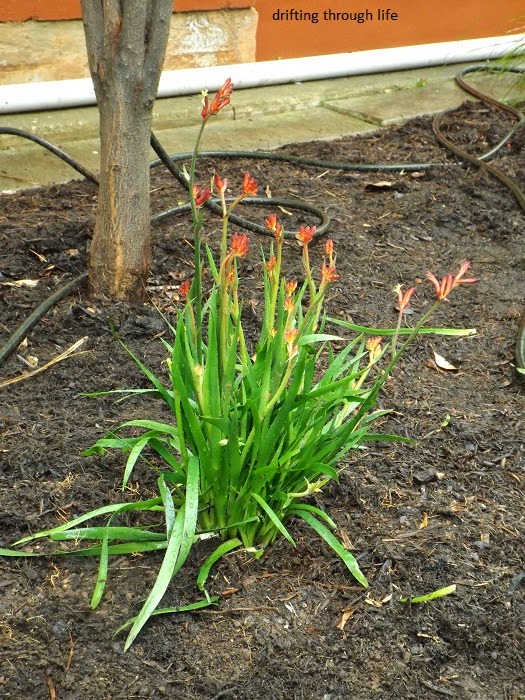 Kangaroo Paw "Bush Gems". I only planted one of everything and left the bed for a week to see if they stayed where I put them. If they'd gone walkabout, I would have been very disappointed. Angry too. 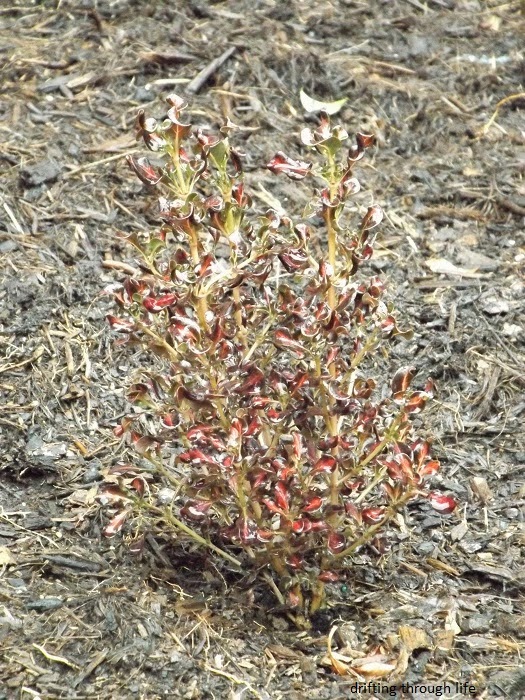 the first Coprosma also went in on this day, it should be easier to see as it grows. 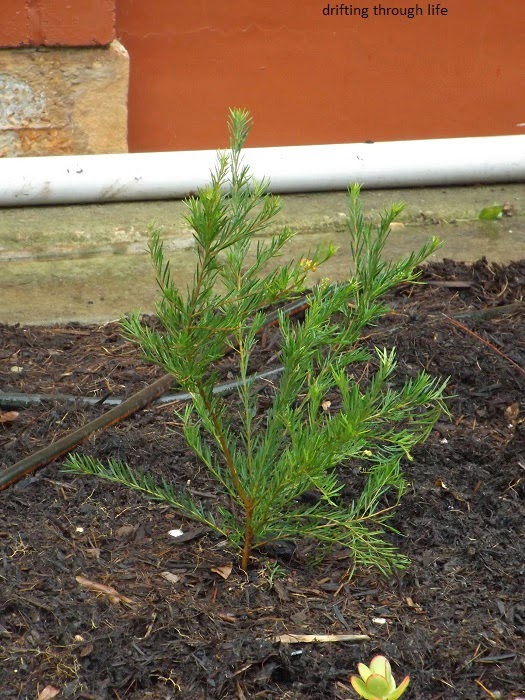 Grevillea "Peach Blush". If you look closely, perhaps enlarge the image, you'll see tiny pink & creamy yellow flowers on this one. They curl around like snail shells and are no bigger than my pinky nail. There is a better picture on the labels featured in last Sunday's post. 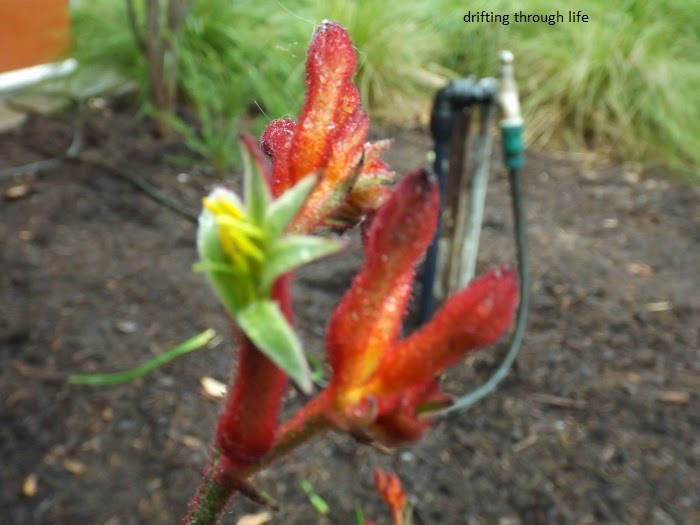 flowers of the Kangaroo Paw "Bush Gems".  A little blurry, planting is hard on the wrists, so holding the camera was a little uncomfortable. 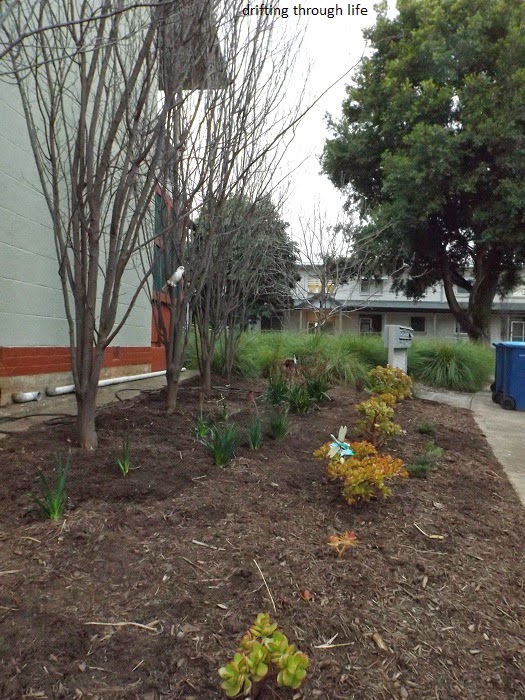 long view of the bed with all remaining plants now in place. You can see there is plenty of space I still have to fill, but I will leave these to grow and spread for a while before deciding what else to buy. I have seeds of marigolds, stocks and hollyhocks that I can put in for summer colour. I'll plant those tomorrow. It's a bit late for hollyhocks, but I'll put them in and hope. 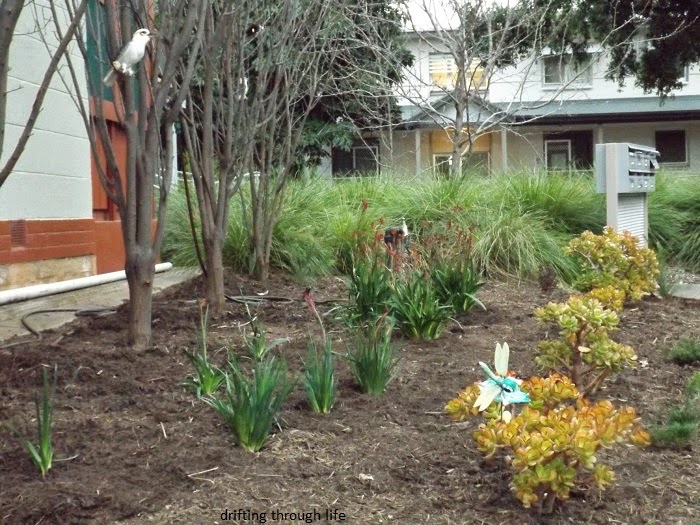 a closer view, where you can see I made a clump of the Bush Gems, a row of the Bush Dance and have spaced out the Bush Volcano and Bush Gold. All Kangaroo Paws. 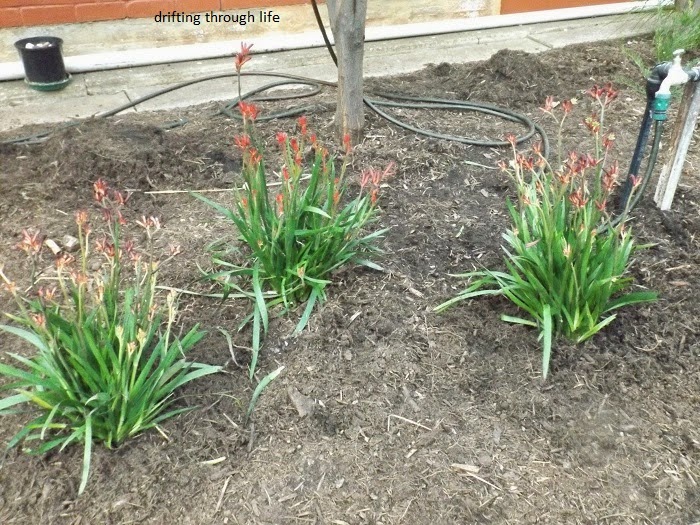 not a very tight clump, but they will all grow into each other a bit. 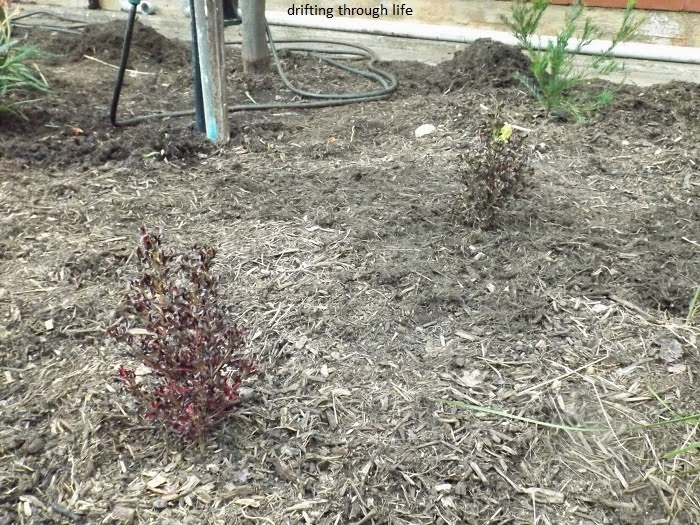 both Coprosmas, they should grow together and form a small hedge 1.5m high by 2m long and will hide the soft grasses a bit. 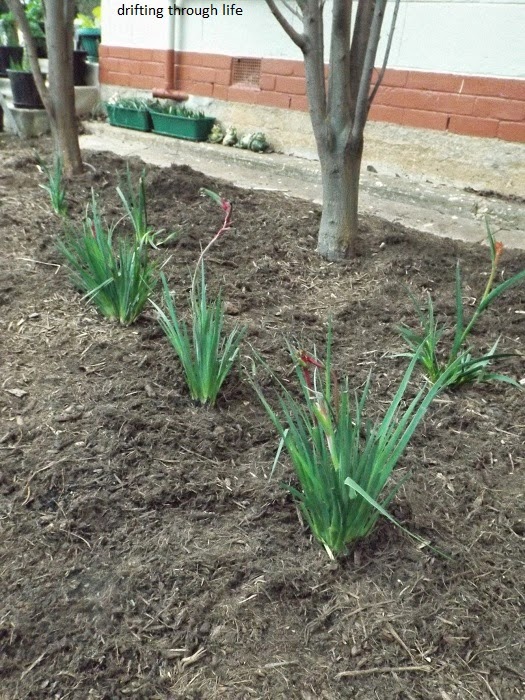 the three Bush Dance plants with the two Bush Volcano behind. 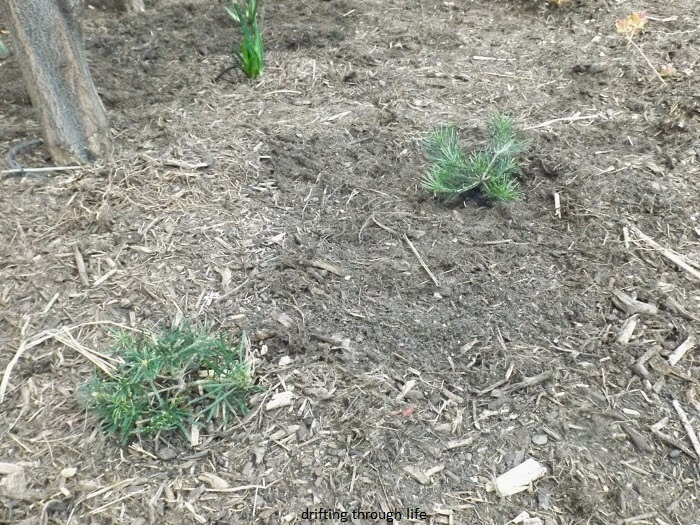 now there are two Banksia "Birthday Candles", these will grow 45cm high 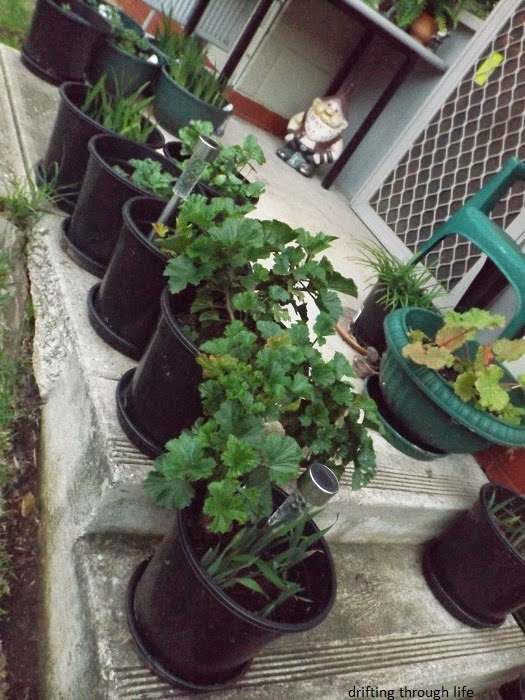 the spring bulbs are all making good progress, that second pot from the front is a pelargonium. 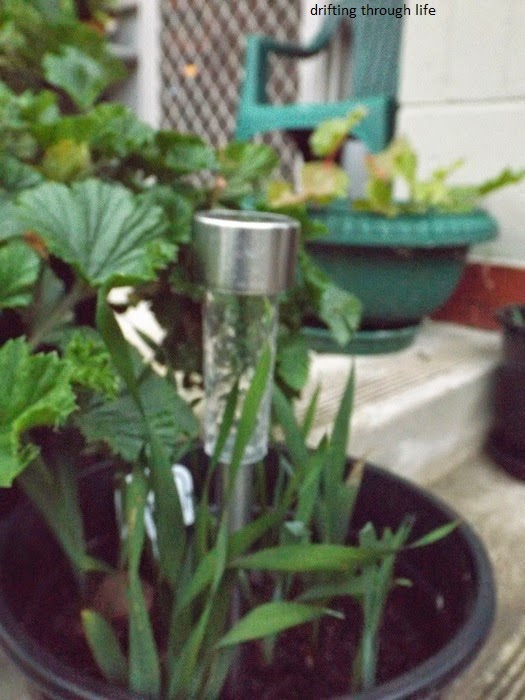 I bought a few little Solar lights to stick into some of the pots, Cheap as Chips $2 each, they look quite nice at night, I can see them through the window, but it is far too cold at night to get out there and take photos. I'll do that in the warmer weather. 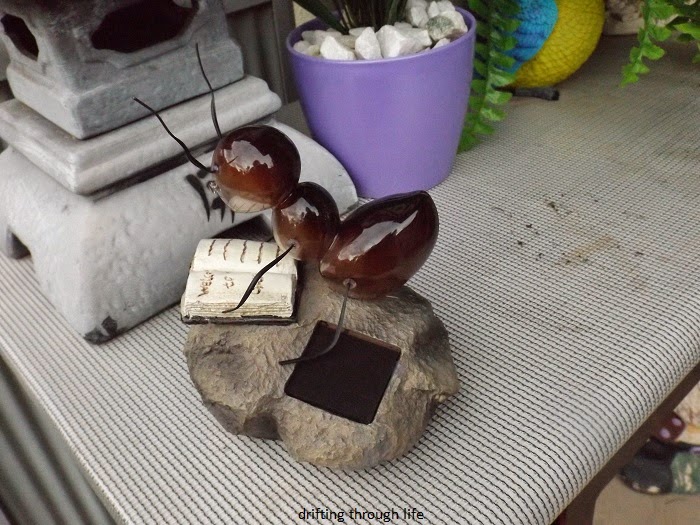 I also bought this cute little Solar Ant, also from Cheap as Chips $4, 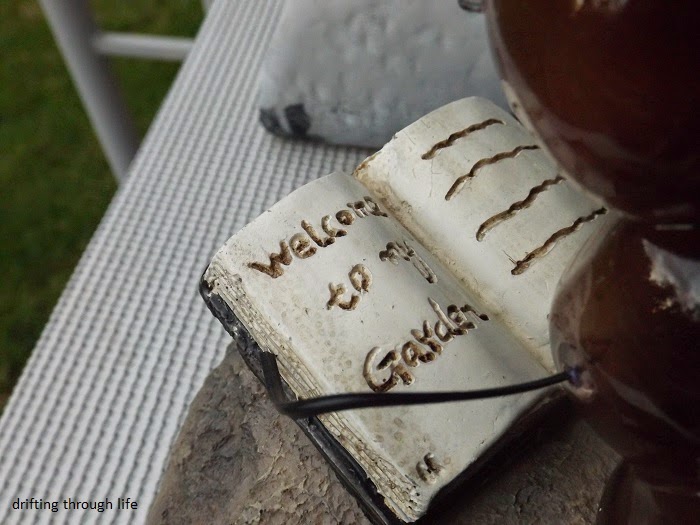 with Welcome to my Garden written in his book.

Now I have a question for Elephant's Child. All these plants have bird and butterfly attracting flowers, but will birds be scared away by the plastic kookaburras I have hanging in two of the trees?
And could anyone please offer a couple of suggestions for fill in plants?  Something that doesn't grow too high, 40-60cm is okay and perhaps not strappy leaves as I have plenty of those in the Kangaroo Paws.
Anything I plant will have to survive in clay soil and in our hot summers.