October 07, 2012
Welcome back to Sunday Selections!

Originally begun by Kim of Frog Ponds Rock, as a way to show off unused photos that may otherwise never see the light of day, now continued by me.

The rules are very simple:
1. post photos under the Sunday Selections title
2. link back to me, River
3. leave me a comment so that I know you've joined in.

I often go with a theme and this week I'm showing you The Boy In Action. 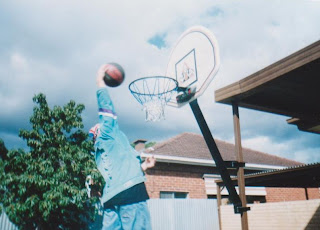 My boy J. As a teenager he loved basketball, and still does now at 31, although he no longer plays.
His heroes were Michael Jordan, Shaquille O'Neal, Mitch Richmond, Alonzo Mourning, Larry Johnson, Mugsy Bogues and Dennis Rodman. 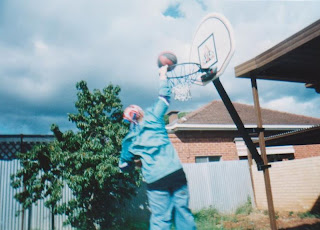 He'd be out there for hours, every day, practising. Wore a big hole in the lawn too.
His bedroom walls, the back of his door, his wardrobe and even the ceiling were covered in posters of his basketball heroes.

Sometimes I'd be out there having a go and even managed to get the ball through the hoop a few times. If Basketball had been available for girls when I was in school, I might have played.
But girls were only allowed Netball, which is quite a different game. 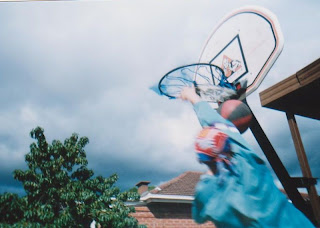 These were taken about 17 years ago.

There are more photos, but they have his face clearly visible, so I don't want to use them.