(From Wikipedia, the free encyclopedia)

"The rickshaw began as a 2-wheeled passenger cart, called a pulled rickshaw, generally pulled by one man with one passenger. The first known use of the term was in 1887." 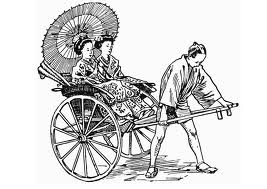 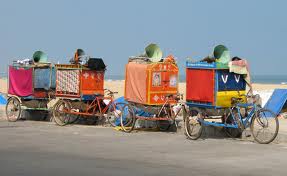 "Pulled rickshaws created a popular form of transportation, and a source of employment, within Asian cities in the 19th century." 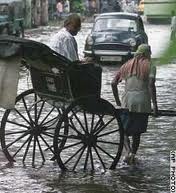 Clearly not the 19th century, note the car...

"Their popularity declined as cars, trains and other forms of transportation became widely available.

Auto rickshaws are becoming more popular in some cities in the 21st century as an alternative to taxis because of their low cost." 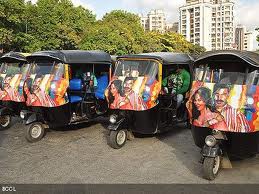 "Though the origins of the rickshaw are not entirely clear, they seem to be Japanese, and of Tokyo specifically. The most widely accepted theory offers the name of three inventors, and gives 1869 as the date of invention." 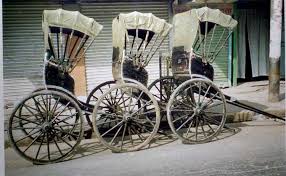 "The vehicle had a wooden carriage that rode on "superior Western wheels" and was a dramatic improvement over earlier modes of transportation." 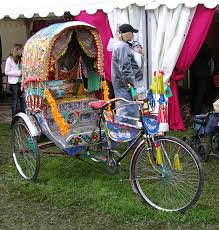 Many rickshaws these days are quite fancifully decorated. This one reminds me of a Gypsy caravan.

"The Powerhouse Museum has had a rickshaw in their collection for 120 years. It was made about 1880 and is described as:

A rickshaw, or Jinrikisha, is a light, two-wheeled cart consisting of a doorless, chairlike body, mounted on springs with a collapsible hood and two shafts. Finished in black lacquer-ware over timber, it was drawn by a single rickshaw runner." 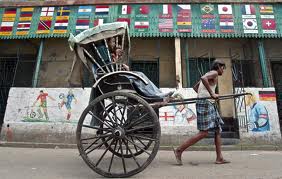 "It became an inexpensive, popular mode of transportation across Asia.
Peasants who migrated to large Asian cities often worked first as a rickshaw runner." 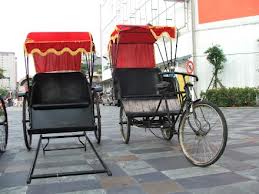 A more modern styling with seats wide enough for two. 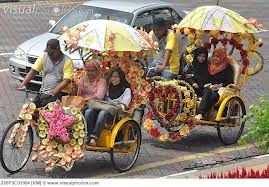 These decorated rickshaws may have been part of a parade.....maybe wedding guests going to a reception.....maybe just tourists. 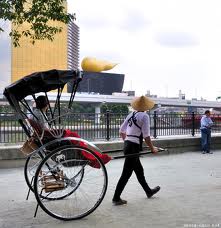 I think it would be fun to ride in one of these rickshaws, perhaps as part of a city tour if I were to visit one of the Asian countries.