" Plagiarism green pasta
I stole this recipe from a good friend of Mele's. It's my go-to dinner party recipe for when shitloads of people need to be fed.

Put it all in a blender. Leave the oil out.
Turn blender on. Then pour oil in. Boom. Pesto.

OR
Buy a jar of basil pesto. Your choice.

1. Cook pasta in a big pot.
2. While it's cooking, throw in the chicken stock.
3. When it's nearly done, or just done, throw in the chopped up broccoli and the peas. If you can't be stuffed with these two, just forget about them.
4. Pasta done. Strain it with the broc. and the peas. Set aside. Keep a splash of that chicken stocky water in the pot if you can. If it all pours away, so what it's just salty water.
5. Put the pot back on the heat. Same pot. Less washing up like that.
6. Put in a big slug of olive oil. Hey, take a bloody shot of olive oil at this point. You're gonna be fine.
7. Put in the crushed garlic. Swirl it around until you can hear it making a little noise.
8. Pesto in.
9. More swirling.
10. Zucchini in. Let that fry up a bit. Basically until it's hot.
11. This is the bit where you can throw in the white wine or verjuice. Just a little bit. For fanciness of flavour. Or, so you can blame me if it doesn't taste right: 'Bloody Franzy! He said to put wine in it!' Seriously though: don't put heaps in. You're just ruining wine you could be drinking. Don't drink the verjuice though. It's not alcoholic.
12. Wine/verjuice steamed off? Pasta back in. Cherry tomatoes in, baby spinach in, avocado in.
13. Stir it up until everything is touching everything else. Give the whole mix some cracked pepper while you're doing this.
14. Serve it up and eat the rest for lunch.
15. Parmesan cheese, of course.

You can pretty much forget everything except for the pasta, the pesto and the tomatoes and it's still going to look great. But you shouldn't. Who doesn't have some cracked pepper and at least one vegetable you can either fry or boil in the pasta water lying around? " 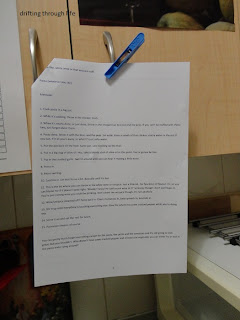 step one: print off the recipe so you don't have to keep running from kitchen to laptop.
Peg it up safely out of the way but where you can still see it. 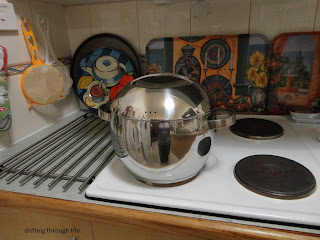 step two: get out your biggest shiny pot. (doesn't have to be shiny if your pot is some other colour) 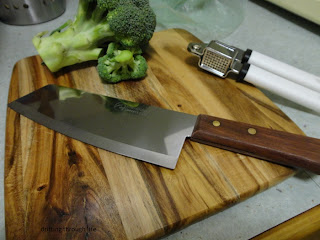 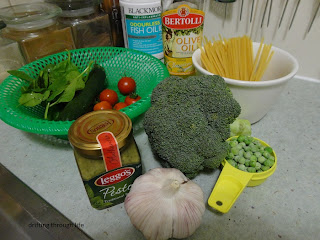 step three: assemble your ingredients. You'll notice I bought a jar of pesto, also there is no avocado or verjuice. No wine either and the olive oil isn't extra virgin.
You'll see fish oil capsules in the background, but ignore those, they don't belong in this recipe. 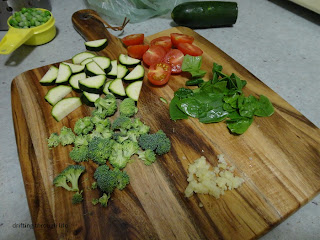 step four: chop everything that needs chopping while your pasta water is heating. 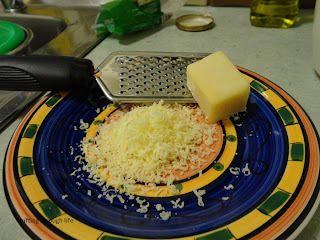 step five: grate some parmesan while your pasta, broccoli and peas are cooking in the chicken stock flavoured water.

The next steps (six and seven) are to drain the pasta veggie mix and quickly stirfry the pesto and crushed garlic, before adding the zucchini and cherry tomatoes. I didn't photograph those steps because you have to be quick so the garlic doesn't burn, also because the hot oil was spitting all over the stove and I didn't want any on my camera. 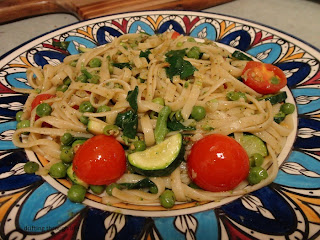 step eight: Add the pasta veggie mix back into the pot, stir it around until hot again, then serve.
Sprinkle grated cheese over. 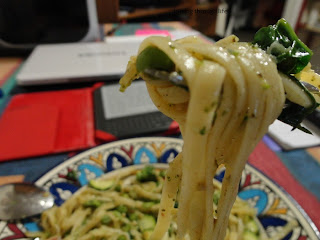 I've never been an expert at twirling pasta, but that doesn't stop me from getting food into my mouth. 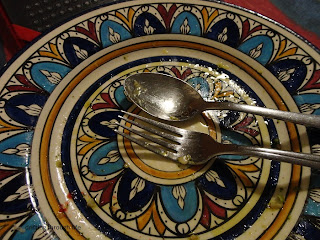 That was pretty damn good, in spite of me being a little heavy-handed with the oil. 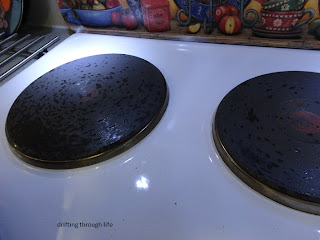 The not-fun part; cleaning up the oil spits.

See those plastic trays behind the hot plates? I find it much easier to take those to the sink and wash them with the dishes, than to reach in under the hood and try to get the wall cleaned of splatters.
The range hood is quite low and I got tired of bumping my head on it.

Try this recipe if you love pasta.
I used quantities to serve one, use as much as you need to serve a family or a dinner party or casual gathering.