April 22, 2013
I'm skipping the "What Irritates You Monday" in favour of this post which I believe is more important.
And the day did have a slightly irritating component.
(the noise)


As you all know, I live in a block of eight flats, constructed in  a T shape.
Well,  an upside down T shape.
The cross bar along the front and the T behind.
Two flats down and two flats up in the "cross bar", and the same in the "T".

A few weeks ago it was discovered that the one of the flats had termites.
Also known as White Ants. 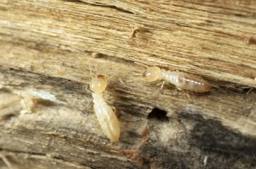 (googled image)
These nasty little buggers will eat your house right out from under you!
And you may not notice until it is too late.

Because of the closeness of the flats, we all had to have a termite treatment carried out.
Well, those of us on the ground floor.
In due time we were notified when to expect....The Terminators. 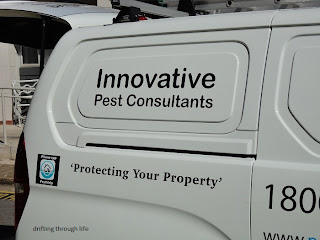 They walked through each flat, decided where to drill holes in the floors and got to work. See the raised edge on that hole?  It didn't get levelled, I had to smack it down later with a hammer when the sealant had set.


I have vinyl floor coverings in my flat, while all the other ground floor flats all have polished boards.
This made it hard for the drill handler to determine where the under floor joists were, so in several areas he struck one and had to drill a little way off to the side to get right through to the underfloor area to be treated. 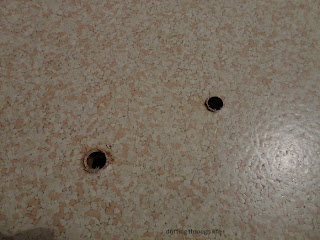 So there they are, twin holes.


The entire perimeter had holes drilled every 30 cm. 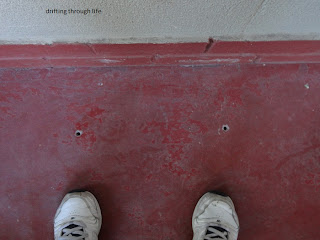 My back porch, front porch,  both sides of the lobby separating the flats and along the sides of the building.
It took hours and was very noisy.
They struck a problem with a couple of the front porches that had ramps built up over the original foundations to facilitate easy access for wheelchairs and shopping scooters**. 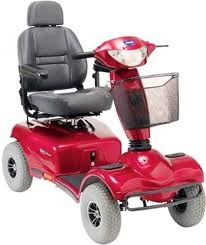 A much longer drill bit was required and was eventually delivered. I did mention that perhaps they should always carry one just for this particular problem. And a stud finder to help with determining the position of floor joists.

One of the Terminators applied the termite treatment in the lobby and around the perimeter, 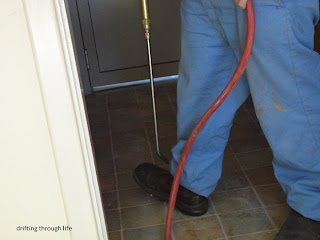 while the younger one worked inside the flats. 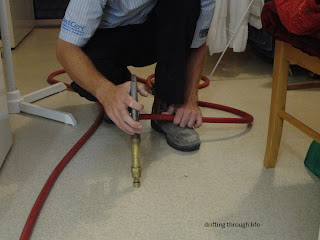 Oooh! there's a strange man in my bedroom!
(ahem)
Once all the holes had been treated they were filled with some sort of silicone sealant and left to dry. 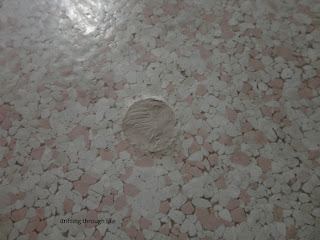 This stuff shrunk as it dried and I now have tiny hollows which will catch dirt and dust.

The perimeter holes had a cap of matching colour sealed to them as well to keep a smooth surface that wouldn't catch wheels. 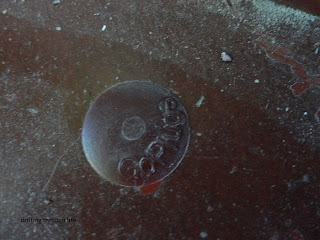 They're slightly rounded, not flat.

While the whole day was noisy and annoying and I now have little beige spots on my floors, I'm glad it was done.
The neighbour who had the termites has had all her cabinetry replaced. Since most of the under sink cabinet was already very badly chewed, they replaced her built in wardrobe as well, just in case.

**A few years ago, I'd decided I couldn't wait to get one of these shopping scooters. I'd fit it with a klaxon horn and sneak up behind those inconsiderate people blocking supermarket aisles to catch up and chat. Then I'd let loose with the horn and watch them jump.
I've changed my mind.
Two of my neighbours have these and every single night they are plugged into the electricity to recharge the battery.
I don't want that extra cost thank you very much, so I'll manage without.
I'll just have to poke those annoying shoppers with my walking stick.
drills shopping scooters terminators termites