Go on over and give Kim some sympathy, she has much pain in her hand right now and can't be working on her hand-made ceramics.

The rules are very simple:-
1. post photos of your choice, old or new, under the Sunday Selections title
2. link back to me, River, somewhere in your post
3. leave me a comment so that I know you've joined in and can come over and see what you've posted.
4. hop on over to The Elephant's Child to see more of her wonderful photos.

I usually go with a theme for my Sunday Selections but this week I have only two photos for you.
Still a theme though.

Recently, Andrew put up an article about the Nissen Huts that housed floods of  immigrants to Australia after World War Two.

I commented on his post that I was sure I had a couple of photos of me on the steps of such a hut.
So I went searching for them.....and I was wrong.
I'm not even sure if Bonegilla Migrant Camp, in Victoria,  had Nissen Huts at all.
Certainly the steps we're sitting on aren't attached to a Nissen Hut. 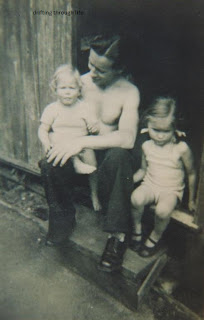 It's also possible that in this photo we aren't even at the Bonegilla Camp anymore.
I'm sure I was one year old here and by 18 months old I had a baby brother, and he was born in Melbourne.

That's my older sister in the photo, she wasn't happy being in a strange new country and not understanding the language. We were from Germany and German was all she knew at age 4.
The food was probably a shock too. I'm told it took her a long time to adjust. 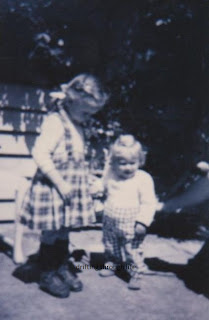 This must have been taken in the winter, J is wearing her boots and I actually have clothes on, instead of just a singlet and nappy. Look, I'm even wearing shoes!

So apologies to Andrew, no Nissen Huts here after all.

I have only one clear memory of that early time and that is of J and me eating breakfast or lunch in a very large dining hall with big wooden tables perpendicular to the walls on either side, and a wide aisle between them.
I questioned Mum once and asked where that had been, but she told me it never happened.
Just like we never lived in -------??
Huh?
(We did, briefly, on ------ Road. Mum let that slip once and it fit with my memory, but I let it slide)