muffins? no no no 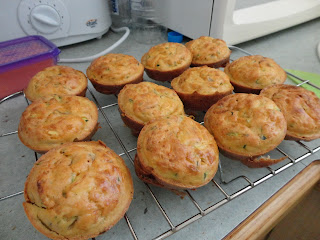 It's a non-stick pan, so I didn't think to grease the cups even a little bit.
Then I allowed the fritters to cool in the pan.
So of course they stuck...... 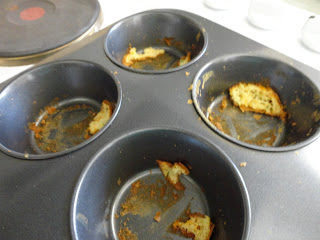 the bottoms of my vegetable fritters looked like this.... 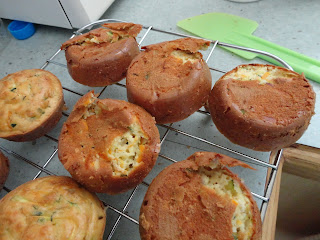 ...but they were still tasty.

oh, you want the recipe?
Well, there kind of isn't one.

Make up a "pancake mix" with less milk, an extra egg, and a sprinkle of white pepper.
Stir in the vegetable mix, pour into the muffin pan cups, bake until cooked through.
I skewer tested  at twenty minutes and they weren't done yet, so back in they went, eventually being done at about thirty minutes.
I had the oven set at 180*C.

Very much a "hit and miss" recipe.
I'd never made these before and I may not make them again.
Then again, they did make a nice change from sandwiches at lunch.
Equally nice hot or cold.

If you don't want to bake them, I suppose you could fry spoonfuls of the mix, just like you would pancakes.
This would result in a flatter fritter, mine were more muffin shaped.
fritters; muffin pan gardening; vegetables