I took so many photos here today, this will be a divided post. Part two tomorrow.
I will be quoting directly from the brochure (in italics) picked up just inside the entrance, also called the Gatehouse. (Mon).


The Garden blends two classic styles. The first is the "senzui", (lake and mountain garden), where water and the imagination create images of vastness and grandeur. The second is the "kare senzui", (dry garden), where rocks and sand evoke the presence of water, even the sea itself.

Himeji is located 650km west of Tokyo and 8050km from Adelaide. With a population of more than 450,000, it is a major port and centre of industry and the headquarters of the Nissan steel company.


Today's photos feature the Senzui part of the garden. 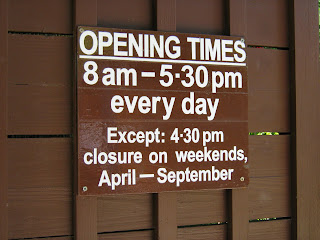 The Gatehouse (MON)
The Garden's gate is modelled on a temple. 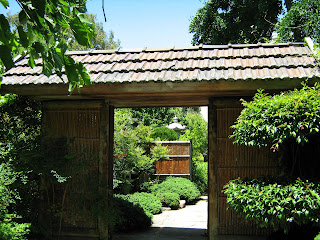 Nearby is a water bowl, (Chozubachi), so visitors may purify themselves by washing their hands and mouth. By kneeling to use the bowl, the visitor adopts a humble attitude, appropriate for the appreciation of the grandeur of nature.

Just look at the crystal clearness of the water dripping into the little rock bowl. 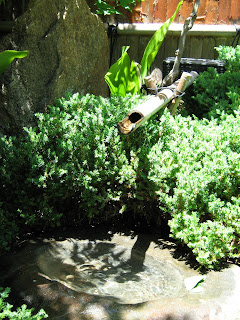 Okunoin Lantern (OKUNOIN DORO)
Made of granite, this splendid lantern was presented by the City of Himeji. The Japanese inscription reads: For the friendship of the two cities.

I forgot to photograph the inscription...... 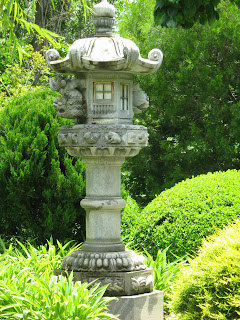 The Lake (S'ensui)
As the heart of the Garden, the lake's form is based on the character "shin" which means "heart" or "soul". The calm water suggests purity and tranquillity of the heart, which Buddhists believe is necessary if you are to achieve enlightenment: the ultimate happiness.
Water flows into the lake from a small waterfall which recalls the wild mountain torrents of Japan.
The lake is quite large, taking up a large portion of the entire garden, maybe as much as 40%. (?) 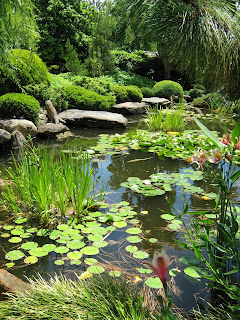 It is disected by this rock bridge, the rocks are huge, very easy to walk on without fear of falling in. 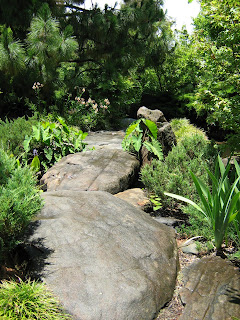 Here is another of the "lantern" style statues, this one in the lake itself, with the calm water perfectly reflecting it. 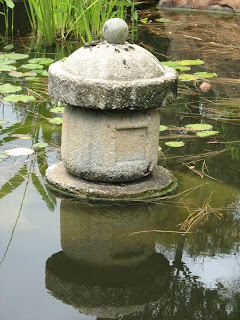 This is the little waterfall which feeds the lake. 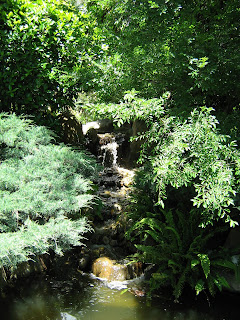 And here is a closer look. 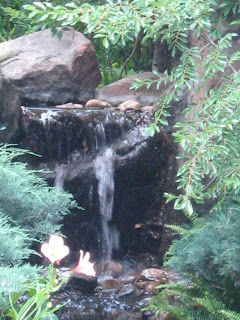 MILESTONE (Michishirube)
Inscribed in Japanese with the name Himeji, the milestone shows the distance to Adelaide's Sister City. In Japan such milestones often take the form of lanterns. 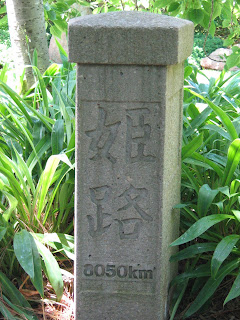 DEER SCARER (Shishi-odoshi)
Originally developed by farmers as a means of scaring off deer and wild boar, the large bamboo tube fills with water until horizontal and then empties causing one end to hit a rock with a "clack".
When I was here last, (probably 20 years ago), the larger tube was real bamboo and much larger than this current one which appears to be plastic. The water dripper tube is still real bamboo. 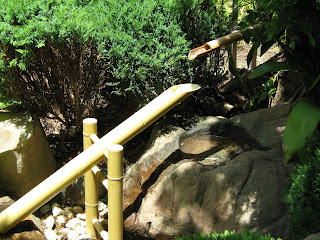 Here is the now horizontal tube emptying into the rock as it clacks onto the edge. 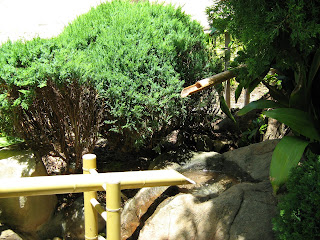 There used to be bamboo windchimes hanging in the garden as well, but I didn't see or hear any today.
To be continued tomorrow.......