December 04, 2010
Remember this book?
I bought it at a sweet little secondhand shop in Hahndorf.
It isn't as old as I thought it was, first printed in 1982, but some of the recipes are much older.
The book appears to be a compilation of recipes from various older cookbooks and is the third book of recipes based on an Independent Television series presented over 12 years in England.
Most of the recipes look to be plain, wholesome, farm style cookery, designed to feed a hard working family.
Names and ingredients are mostly familiar.
Simple Barbecued Chicken; Leek and Potato Soup; Rabbit Casserole with Dumplings; Oatmeal Scones; Fried Tripe with Onions. (oh, yuk!) 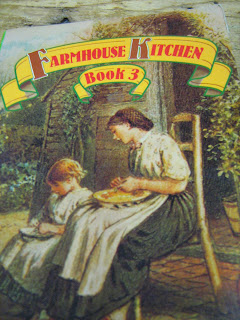 But some of the recipes have more interesting names.
(Anything with quotation marks is a direct quote from the book.)


Like White Foam Soup.
This has many of the standard soup ingredients, but also includes eggs, milk and cheese.
The egg yolks are included in the cooking stage, then the egg whites are stiffly beaten, half is folded into the soup, the rest put into a hot tureen and the soup poured over, causing the egg whites to rise through the soup to the surface, forming the white foam which gives it its name.


How about some Soup Nuts?
These are tiny raisin-sized pieces of choux pastry placed on a greased baking tray and baked at 200*C for 10 to 12 minutes until golden brown. To accompany soup of course.

Huffed Chicken anyone?
"In this old Sussex recipe a chicken was stuffed, then wrapped in suet pastry and probably a pudding cloth, and then boiled for several hours.
The recipe which follows is an updated and delicious adaptation."


Then there's Bacon Floddies.
"A way to use up a small amount of cold cooked meat. Turkey or chicken floddies can also be made."
This appears to be a basic potato pancake type recipe with the addition of the bacon. Or turkey, chicken, whatever you have leftover.

There's a How D'You Do Cake. (More of a pie really)
Made with shortcrust pastry that has been made with self-raising flour instead of plain.
The filling is dried currants, mixed peel, golden syrup, soft brown sugar and sweet spices. Glazed too.......yum.

Kentish Huffkins.
"These are plain, white, flat yeast cakes, traditionally baked with a dimple in the middle."

Green Egg Plum Jam.
(Not made with green eggs!)
"Look out for these plums in mid-August and buy green ones if you can. This is important as it produces a nice tangy jam with a good green colour."

White Ladies Pudding.
"This recipe is named after a village near Worcester called White Ladies Aston where a convent of Cistercian nuns lived in the 12th century. They wore white habits.

Other intriguing titles include:-
Onions Baked in Cider
Fudge Tart
Kidderminster Plum Cakes
Chocolate Cream Pie
This last one, the choc cream pie, has to be good for you, the base is made with cornflakes and all-bran.....

Being an older cookbook, a lot of the recipes contain butter, cream, lard and other high cholesterol type ingredients. If I were to try any of them, I'd make them as instructed to get a feel and taste of how it's supposed to be, then maybe try to work out a less heart attack inducing version.