December 20, 2010
This is the brochure available just inside the Gatehouse.
Once again quotes from this will be in italics. 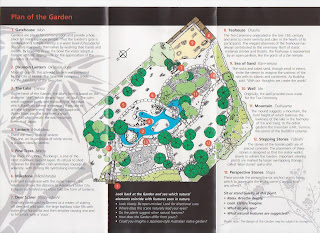 This is the Teahouse, (Chasitu).
The tea ceremony originated in the late 13th century and aims to create serenity and calm in the hearts of its participants. The elegant plainness of the Teahouse has always contributed to this ceremony. Built of classic materials, (timber and thatch), the Teahouse is represented by an open pavilion, like the porch of a zen temple.


Here is a long view of the Teahouse, you can see there is a bench seat built along one side, while the other side is plain wall. 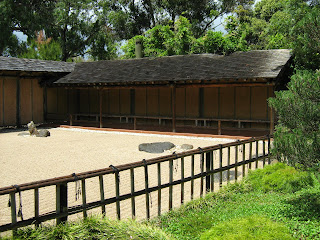 Here is a closer look at the seat where I sat and waited for the latest rain shower to pass.
(I don't like the camera getting wet). 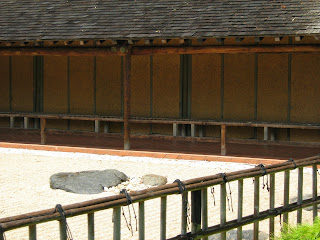 It's a simple wooden bench, with no adornment whatsoever to detract from your contemplation of the Sea of Sand you are looking at. 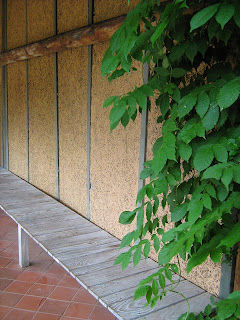 This is a little greenery just beginning to grow on the plain wall of the Teahouse. 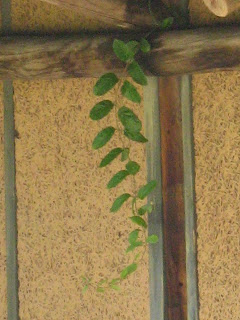 Here is the roof of the structure, I glanced up and thought it was very photoworthy. 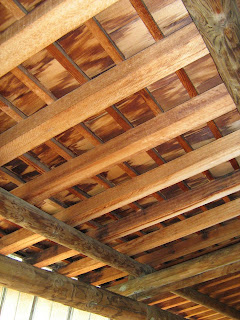 Sea of Sand, (Kare-senzui)
The rocks and raked sand, though small in extent, invite the viewer to imagine the vastness of the sea with its islands and continents. As Buddha said, "With our thoughts we create the world".
This is a long view of almost the entire Sea of Sand. Just beyond the fence is a Jacaranda tree.
Even the fencing is simple wooden construction. 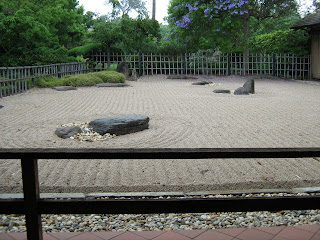 Some of the rocks, isolated in the sand, like this one that was right in front of me, are flat, circled by rings representing ripples in water. 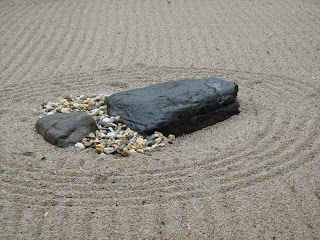 Others, grouped together on the perimeter, represent continents, still with the ripples that represent waves coming in to shore. 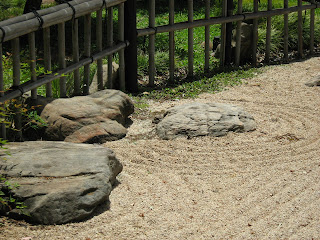 Other rocks are larger and upright, like island volcanoes perhaps. 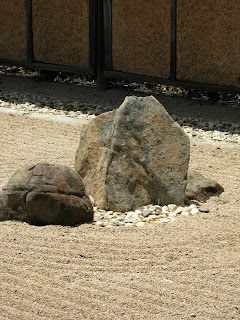 Well, (Ido)
Originally, the well provided pure water for the Tea Ceremony.
I thought this was just another of the many pretty water features dotted throughout the Garden, until I read the brochure. 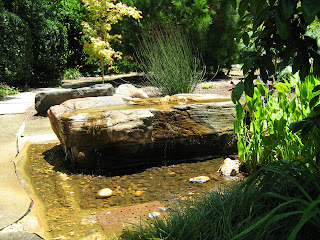 The rock has a shallow channel along the length of the top, with the water welling up from the centre, and spilling over on all sides into the shallow pool below.
Here it is from the other side. 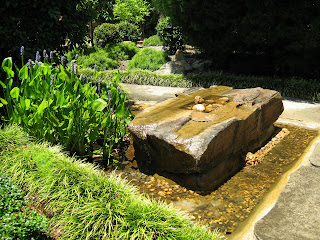 Stepping Stones, (Tobiishi)
No that's not a mis-spelling, it does have two "i's".
The stones of the garden path are of precast concrete. The placement of these stones is designed so that the visitor walks slowly to admire the Garden. Important viewing points are marked by larger overlapping stones called "label" stones. (yaku-ishi)

This path, near the Teahouse is bordered with Mondo grass. 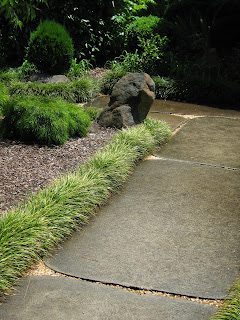 Another section of the path, this one near the Gatehouse, is bordered on one side by flowers, many of them azaleas and lilies, and on the other side by lawn. 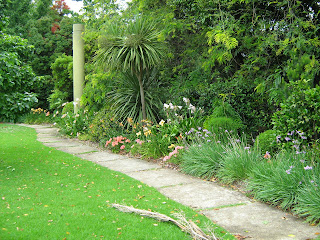 Throughout the garden are stone seats for sitting and quiet contemplation.
Or just for resting weary legs and feet. Weariness being caused by dashing to the shelter of the Teahouse everytime it started to rain...... The next photo is of a small section of the lake, (S'enui). At points around the lake are very large, flat rocks jutting out over the water, just a little. These are called perspective stones.
Perspective Stones, (Stupa)
These provide the perspective, (or anchor), points from which to appreciate the entire scene.
I stood on this perspective rock, part of which is seen to the right in the photo, trying to get a decent photo of the very large goldfish swimming there. See that faint orange smudge in between the rock and the lily leaves? That's him. He's easily 9 inches long and enjoyed teasing me by coming close to the surface then diving for the murky depths when I raised the camera. 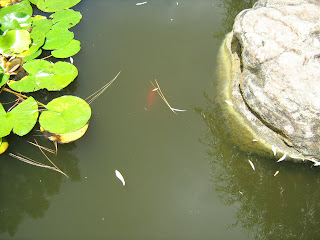 After taking a gazillion photos, (well,120), I sat in the nearby Fasta Pasta Restaurant eating lunch, (lasagna and garlic bread), and scrolling through the photos. On the small camera screen a lot of them looked like green, followed by green, followed by yet more green. I'm pleased that on the larger computer screen, they actually look like the scenes I'd photographed.
There's a few more pictures that I haven't shown you, but I'll save those for some other day.