December 22, 2010
I've transplanted tomatoes, mini capsicums, mini rockmelons, even 3 heirloom carrot seedlings.
Carrots don't usually transplant well, if you don't get the roots down nice and straight, they'll grow all twisty. That's what these 3 will probably do.


I also planted more carrot seeds, yum, along the edge of the tubs with the newly transplanted tomatoes, those carrots should grow nice and straight.


I planted more beans too, bush beans this time, not climbing, so they won't need support and I'll have lots and lots of beans to freeze. Beans are one of my favourite vegetables.


I had a little potting mix left over, so I moved the borage seedlings into bigger pots and gave them each a stake for support, because once they flower they shoot skywards.
Once I know they're going to survive the move, I'll position one at each end of the garden to bring the bees.


Hopefully, I'll have male and female flowers on the pumpkin and melon plants at the same time, so the bees can do the pollinating for me.
If not, I have a new small paintbrush and a clean jar ready to brush the pollen from the male flowers into, then I can transfer it onto the female flowers when they appear.


Everything was then given a good watering with some Seasol in the water, it helps to guard against transplant shock.


Now it's time to cross my fingers, hope, pray, light candles......
Maybe I should make a sacrifice?
Anyone out there have a lamb or kid they don't need? Rooster?


No? Okay then, just prayers and hoping.

And here, before I forget, is the spider that I found yesterday.
I was tipping over a brick, (with gardening gloves on of course), so that I could check it for spiders, before rolling it around the side of the house to stand pots on. 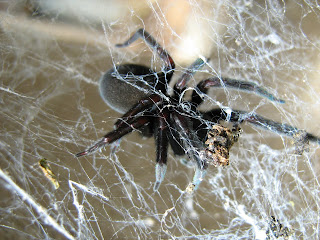 I got an old tomato stake and pulled him out, and he just sat there, looking at me.
Probably enjoying the sun.......
He's rather magnificent isn't he?
About an inch or maybe a little more, from nose to tail, bigger if you include legs length. 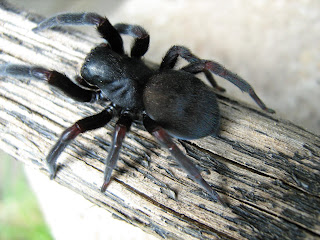 Here he is looking straight at me. If you look closely he appears to be frowning.
At this point, I decided I really didn't need that brick, so I put him back and rolled the brick over the way it was. 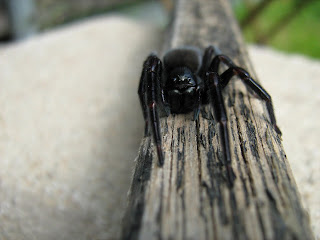 I also spotted a couple of redbacks.
Spiders, not cricketers. (or whatever sport that is they play)
They got squished. And their eggs too.