May 07, 2011
WHITE COOLIES
I found this book at a garage sale, or maybe in a secondhand shop, when I was 16 and living with my mother in Murray Bridge, South Australia.

As I flipped through it the sketches at each chapter heading caught my eye and I thought perhaps the story was a comedy, so I bought it. I remember it was very, very cheap.
I didn't get very far into the first chapter before realising this wasn't at all a comedy, but a true story of horrific times, although it was written with humour, and I did laugh quite often while reading.
Many parts of the story made me cry then, and still bring tears to the eyes and a heaviness to the heart even now.

These two pictures show the spine with the title and the front cover. There used to be a paper sleeve cover over this, but I took it off as I so often do while reading a book, so that it wouldn't get torn or otherwise damaged, since I toss books in and out of whatever bag I'm currently carrying, onto tables, out of beds, they slip off the couch when I nod off... I've no idea what happened to it, possibly I left it lying around and it got thrown out by mistake. 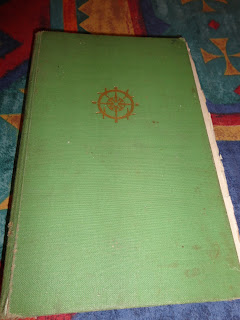 Extractions from the Author's Note:
"This is the story of those Australian Army Nursing Sisters who were in Malaya with the 8th Division A.I.F. in 1941 and early in 1942, and were later taken prisoner by the Japanese.The story was written periodically by one of the surviving sisters, while prisoner, during the next three and a half years."

Extractions from the Foreword:
"With these women it was a different kind of war.
...born of women's natural instinct to tend the sick, the helpless, the suffering and the fearful.
...in this story, Sister Betty Jeffrey tells of the experiences of some who were taken prisoner by the Japanese." 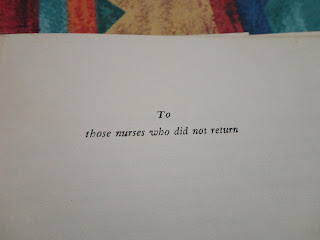 Part of the page listing the 32 Australian Army Nursing Sisters, Prisoners Of War, about whom this story is written. 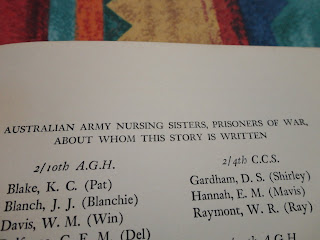 These next three images show just how much sticky tape, old and older, is holding this book together. 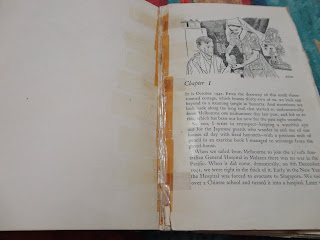 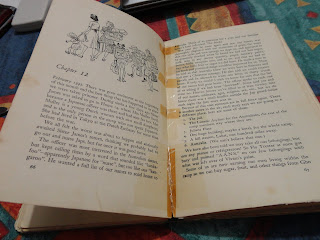 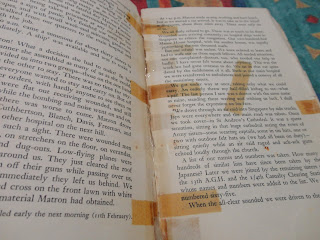 More than any ANZAC Day march, this story makes me thankful to be Australian and thankful for the soldiers and nurses who fought to keep this country free.

Until this year, 2011, I hadn't read this for several years, but I used to read it every year around ANZAC Day.

After all these years though, I'd be interested in reading a similar story, in English of course, written from the Japanese point of view.
How did the citizens feel/fear while this awful war was going on?
How did they cope?
How did they manage their families and day-to-day lives amidst this upheaval and destruction?
books; reading; old books