February 18, 2012
This afternoon I was visited by Don, (I guess "Anthony" was occupied elsewhere), to measure my window and give me a quote on the cost of the awning and the installation.

We introduced ourselves and I put my hand out to shake, which Don clearly wasn't expecting.
His handshake was a bit weak, as if he hadn't had nearly enough practice.
Maybe I should have told him his handshake could use a little more firmness?
I've noticed not many people do handshakes anymore.
And just when I was getting used to it too. I'm not a touchy/feely type and usually avoid physical contact from strangers.
(I've only ever been comfortable with L touching me. And my kids, which is an entirely different thing).

Back on topic....Don measured the window, then we sat down to discuss awning colours and whether or not I'd like a scalloped edge. Yes, of course, all the other awnings in the complex have scalloped edges.
Although they all have plain colours and I've chosen a stripe, for enhanced street appeal, also for ID. Now I'll just have to say look for the striped awning.... 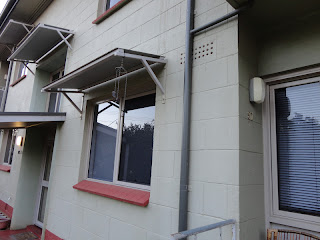 This is the window to be covered. (Awned?) You can see it has that little "eyelash" fixed awning, and you can see just how much of the window that eyelash doesn't shade.
Way too much heat coming inside via the heated glass, even with the inside blinds drawn all the way down.  So in the winter as well, there will be too much cold coming in....hence the awning.
Also, my inside blinds, bought off the shelf, don't quite cover the window. There's a small gap either side, so I'll be having my curtains up too as soon as I get the rod holders screwed in place.

The brickwork (they're actually cinder blocks), looks grey here, but it's actually a very pale green, of the shade that used to be called spearmint way back in the 60's. Windowsills and the bottom two courses of bricks are a terracotta shade.
I've chosen a federation green awning with a terracotta stripe that has thin cream stripes in it.
Cost? Well within my budget, since the company I chose was having a 40% off sale. Yay me!

I paid the deposit and got a receipt, the awning will be installed in 3-4 weeks time.
As soon as the awning is up, I'll post a photo.