February 20, 2012
First small pleasure....on Saturday, I took myself to the cinema.
I'd been seeing advertisements for the movie "One For The Money" an adaptation of a book I've enjoyed reading several times; written by Janet Evanovich, it's one of the "Stephanie Plum, Bounty Hunter" series.

It's not a "spectacular" movie, if you're used to watching the big blockbusters with lots of action and special effects, you might be disappointed.
But I wasn't. I loved the book, so I enjoyed the movie. When it's released on dvd, I'll buy it.

Katherine Heigl plays Stephanie Plum and does it very well. I don't remember most of the other actors names, but I remember Grandma Mazur is played by Debbie Reynolds.
The actor who plays Ranger is seriously cute, studly even, (hubba hubba), although shorter than the Ranger in the books.
In the books, Grandma Mazur is small and feisty, with "slack skin over spindle bones".
Debbie Reynolds doesn't fit this description at all.
Debbie is too plump, there's no wrinkled, saggy skin at all, and her overall demeanor is too "nice".
All of you in my age group might remember that she played "Tammy" years ago in the movie Tammy goes to College and other "nice" movies in a similar style.

A far better Grandma Mazur would have been someone like Estelle Getty; such a shame that she died.
Remember her in "Stop, or My Mom Will Shoot"?
Hilarious!
Estelle Getty played Sylvester Stallone's feisty old mum in that movie. 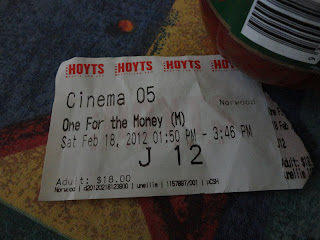 Note the price on the ticket. $18!! I haven't been to the movies in ages, and this reminded me why. ﻿
Then there's also the missing-bits-if-I-go-to-the-toilet issue.  Dvd's can be paused.... 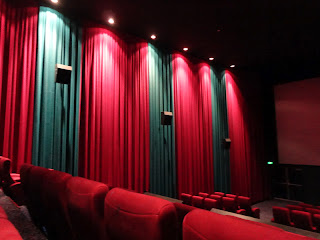 I entered the theatre early, sitting in the cool and the quiet for almost half an hour before other patrons took their seats. 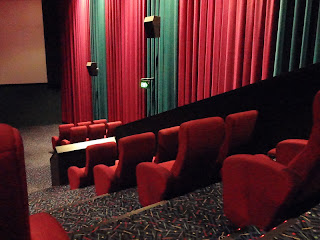 I was happy with the colour scheme in there, my favourite colours!
I could have been sitting in my own bedroom! 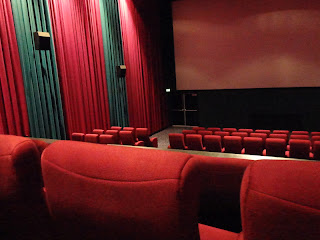 I read my book until the lights began to dim, then sat through over thirty minutes of previews and advertisements before the movie finally started.

As always it was a bit of a shock to walk out of the cinema into the bright afternoon sunlight and wait for the bus to take me home.

On Sunday, there was another small pleasure.
I'd been for a ride on my bike and on the way home I rode through Victoria Park which has several bike/walking trails. And millions of giant ants......
I noticed a group of older people spreading blankets and unpacking little folding chairs and stools; I thought, how nice, they're having a picnic.

But it wan't just a picnic! Oh no! These people also began opening large boxes contining remote controlled planes and jets! A couple of newcomers to the site were bringing planes from the boots of their cars.

I spoke to one of them, mentioning that I hadn't seen large scale remote planes since I was just a little kid, he replied that they do this every Sunday.
Well, well, well.
I may have to get back there one Sunday and take my camera.
I rode on a bit further, away from the group, then stopped by some shady trees to watch a jet flying, rising, spinning, looping.......the owner had great control, clearly from much practice!

On arriving home, so very hot and sweaty, I experienced another small pleasure in the form of a cool shower, then a bowl of icecream.  A much smaller serve than usual, because of my self-imposed weight loss program, but still very enjoyable.

So that was my weekend. I hope yours was equally pleasurable. Tell me about it?
small pleasures; weekends