March 29, 2012
This tomato/bean soup is my version of Minestrone.
It's quite thick and very filling, so often I don't even bother with bread, and I never have dessert after this one.  Which doesn't mean much since I rarely have dessert anyway. 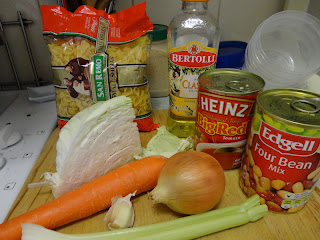 These are the ingredients.
Naturally I don't use the whole bottle of olive oil, nor do I use the whole packet of small shell pasta.
It's just a splash of oil and about half to one cup of small shell pasta. Uncooked measure.
I like a lot of pasta so most often use a full cup measure.
The soup is a can of condensed soup, I empty this into a jug and straight away blend in a can of water.
The four bean mix is drained and rinsed. 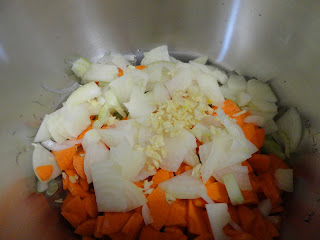 The above chopped ingredients can be found again and again in my soups.
The same ingredients are the base of most of my spaghetti sauces.
One onion (two if it's a beef soup)
One or two sticks of celery
One or two carrots
One crushed clove of garlic two if they're small.
Not shown here is a cupful of shredded cabbage. 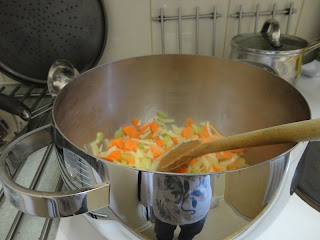 Stirfry the onion, celery, carrot and garlic over medium heat until the onion is softish.
Don't let it brown. 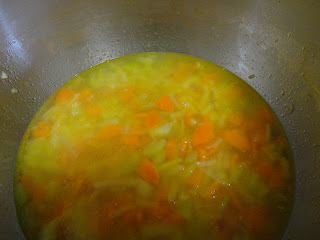 Cover the vegetables with water, put the lid on the pot and simmer until most of the water has evaporated.
This ensures the vegetables are cooked and soft.
Don't add too much water by mistake as I did in the picture above, it takes forever to simmer down.

At this point start cooking the small shell pasta in a separate pan of boiling water.
No salt. 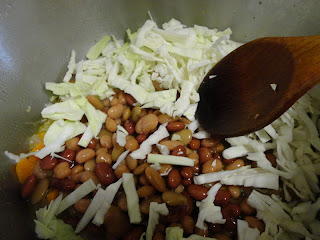 Add the previously drained and rinsed four bean mix and the shredded cabbage to the softened vegetables, stir and heat until the cabbage has wilted. Toss in a handful of dried or fresh parsley.
Parsley is another ingredient that gets tossed into almost everything I cook. 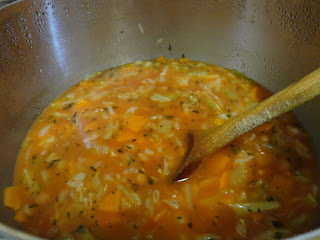 Now stir in the blended condensed soup&water. If you'd like a richer colour and/or flavour, add a sachet of tomato paste. About two tablespoons. Turn down the heat to the lowest simmer. 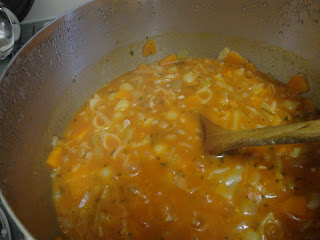 By now the small shell pasta should be cooked, so drain it off and add to the soup.

Or divide the soup between three or four freezer containers, allow to get cold, then cap and freeze.
I usually have one serve immediately and freeze the rest for later dinners.


*A note about the vegetable soup from a couple of days ago.
Try it as it is, then if you find it a little bland, liven it up by adding a couple of teaspoons of worcestershire sauce and a tablespoon of tomato sauce at the final simmering stage.
I sometimes add a half cup of tiny pasta shapes as well, to make it more filling.

* I scheduled this to go up at 5am this morning. What the heck happened????
tomato bean soup; freezer foods