March 31, 2012
I've copied and pasted the following information from Wikipedia, the free encyclopedia

This is basic information.Career (Australia)

This next section is more extensive information.

The Falie is a 46-metre (151 ft) ketch that traded for many years in Australian waters. Originally built in 1919 as the motor schooner collier Logger, she was purchased by the Spencer's Gulf Transport Company, renamed, and used for coastal trading in South Australia. The vessel commissioned into the Royal Australian Navy (RAN) as HMAS Falie during World War II, serving first as an inspection vessel, then as a stores ship.

Returned to her owners in 1946, Falie was used to transport explosives around Australia before resuming the South Australian coastal trade in 1968. She was retired in 1982, then purchased by the South Australian government for preservation. Although initially used for day and overnight sails, by 2005 the ship had fallen into disrepair.

She was built in Holland as a gaff rigged motor schooner collier in 1919 and named Logger.

She was bought by the Spencer's Gulf Transport Company Limited in 1922. In 1923, she sailed to South Australia where she was renamed as the Falie and participated in the extensive ketch trade to isolated towns along the coast of South Australia. Later she was converted from her original configuration to a ketch.

During World War II, the Royal Australian Navy requisitioned the Falie, renaming her as HMAS Falie. Initially she was used as an inspection vessel. On the night of 31 May, she was acting as a watchdog outside Sydney Harbour, when she struck a Japanese midget submarine trying to infiltrate the harbour. The Falie was converted in 1943 to a stores vessel, and was deployed to Papua New Guinea, where she saw action landing troops in enemy territory by night.
In 1946, she was paid off and returned to her owners. For the next 15 years, she carried explosives around the Australian coast. In 1968, she returned to South Australian waters where she continued to operate as a trading vessel until she retired in 1982, the last ketch to operate commercially in South Australian waters, and the last sail powered trading vessel in Australian waters.
Preservation

The Falie was then purchased by the Government of South Australia for preservation as a community and educational resource. The ship was restored for the state's sesquicentenary celebrations in 1986, with re-masting, new sails, and the fitting of accommodation and a galley. With this arrangement, she could carry up to 70 passengers on day trips, or 20 passengers plus nine crew overnight.
In 2005, a survey revealed that her hull plates had corroded to the point where she was unseaworthy. She was not returned to seaworthiness as no sponsor could be found to cover the cost of repairs, estimated to be more than a million dollars.
In 2007, it was proposed to move the Falie to the wharf at American River, Kangaroo Island as an interpretive maritime museum, but by 2009, this had not been acted on.[4] It was suggested that the South Australian government was looking to divest itself of the Falie, and that the estimated cost of repairs to the hull was in excess of $3 million.
End of Wikipedia information.

I have to confess I knew nothing about The Falie apart from the fact that she is moored at Port Adelaide and no-one can afford to repair her.
When I was at The Fisherman's Wharf Markets, I took photos of The Falie. 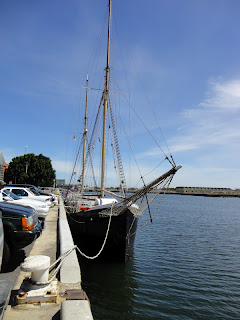 This was taken as I stood right on the edge of the wharf and hoped I wouldn't step the wrong way and get my camera wet.... 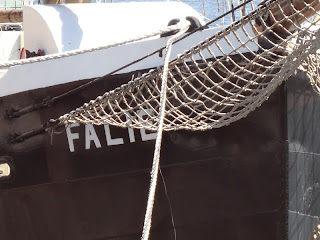 See the name? Definitely the Falie, because you know I wouldn't get down there and paint that name myself just to fake a picture.
(definitely--no "a"s in definitely) 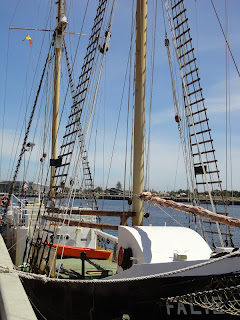 I know nothing about ships, so to me she looks quite small, although she's a lot bigger than the sailing boats and fishing boats I used to watch from the Semaphore pier. 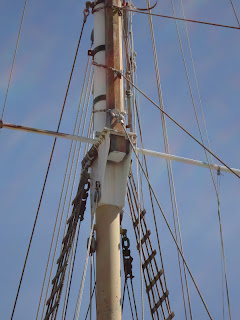 This rigging looks much firmer than the saggy ropes I've seen on old  movies, it appears to have wooden slats as cross pieces. Just like walking up a ladder. 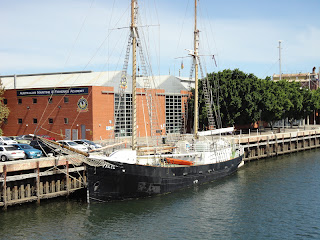 This last photo was taken as I walked across the bridge and headed for Semaphore. It's a nice walk, takes about an hour.
the Falie; Port Adelaide