you'll never guess where I've been 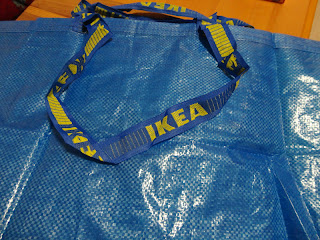 Ta-daaa!  Ikea! You're probably not at all surprised.

I went there to get a few measurements and just generally look around to see if there was any new stuff that's not in my catalogue.

I saw a chest of two drawers that I positively drooled over.
Why?
Because it was the exact shade of blue that I'd love to paint my current bookshelves.
(I'm going back with paint charts to see if I can match it to a shade on them)

The real reason I was at Ikea? I was shopping for a 5 litre pot to make soup.

You see, in my previous home, I had a very large pot. A 10 litre pot. With a pasta insert and a rice steamer insert.
I rarely used the inserts, but the pot was on my stove every winter making gallons of soups and spaghetti sauces to freeze.
When I  moved here, I thought that maybe I wouldn't bother with making such quantities of soups etc, since the stove was electric and I wasn't happy about cooking on it.
So I gave the pot to my youngest son, who has always loved it and was very happy to get it. He's become quite the cook since I  moved out and left those two on their own.

But I've got used to the stove, sort of, and with the cooler days, I've had a yearning for homemade soups. So this morning while shopping I filled my cart with loads of soup veggies and it wasn't until I got home that I remembered I didn't have the big pot anymore.
Well, I stashed the veggies in the fridge and caught a bus to Ikea. I'd remembered seeing a lovely pot the last time I was there... 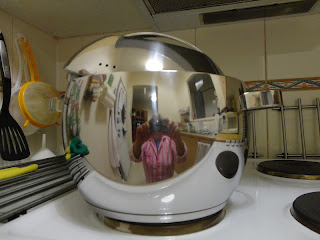 Ooooh! shiny! with a reflection of me in my stripey pink jammies!  Ha Ha!
I love the roundness of it. This is the 5 litre pot, there's a 3 litre version also, but I already have a 3 litre saucepan. 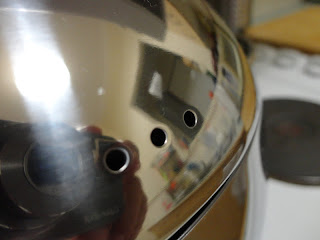 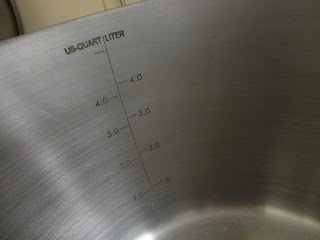 And I like the quart-litre measurements on the inside.

Saturday morning I'll be peeling, chopping, simmering some yummy vegetable soup.
Later in the day I'll be making tomato-bean soup then Sunday will be devoted to a batch of spaghetti sauce.
I love winter foods.

While I was browsing around in Ikea, I spotted these mini trivets.  For putting your hot pots on so you don't scorch your bench tops. 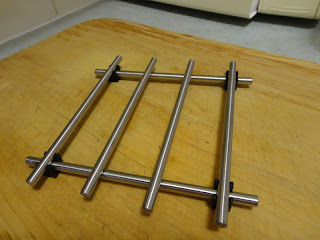 isn't that just so cute? 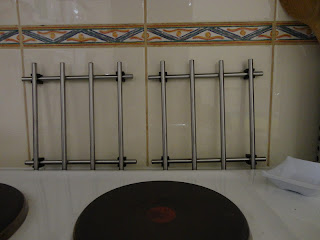 I bought two, because one on its own would be lonely... 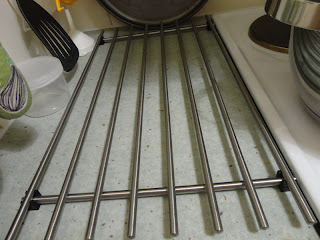 They match the big one that sits beside the hotplates, one of the first things I bought within a month of moving in last year.
ikea shopping; pots; trivets