The rules are very simple:-
1. post photos of your choice, old or new, under the Sunday Selections title
2. link back to me, River, somewhere in your post
3. leave me a comment here so that I know you've joined in and can come over and see what you've posted.
4. hop on over to Elephant’s Child to see more of her wonderful photos.
Andrew often joins in too.

I usually go with a theme for my Sunday Selections and this week I have a few photos of new things in my garden. 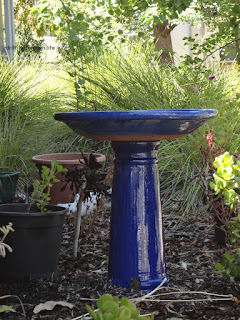 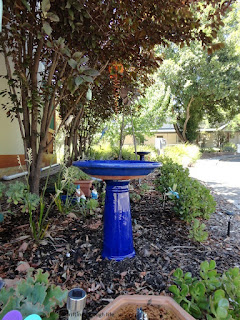 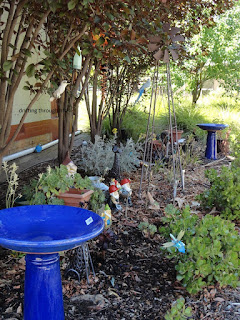 see? two of them. Pretty aren't they? but they're not for the birds.
I have plenty of water dishes around for birds, lizards and cats. 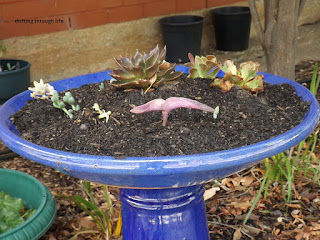 these are now planted with bits of various succulents I took from other plants. I plan to surround the base of these with a ring of kalanchoe and/or Jade "Gollum". 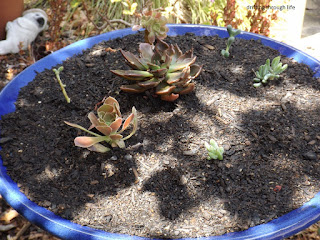 I decided I needed a little height in the garden, since all of the succulents in there are low growing and the kangaroo paws won't be tall until they flower and then the flowers don't last long. 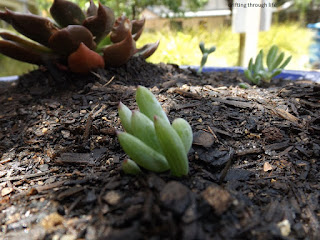 these cuttings will fill the bowl eventually and some will spill over the sides a bit and look interesting. 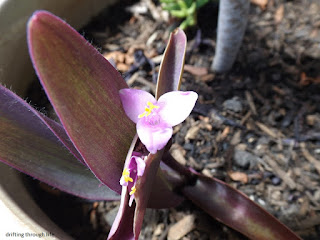 remember the tiny piece of this I showed last year? I *ahem* pinched it from a large plant growing next to the footpath by a bus stop. Well, it has tripled in size and flowered twice. I took a piece from one side to put into one of the bird baths. 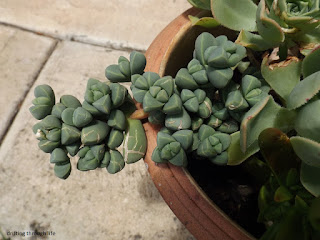 this donkey's tail was a one-and-a-half inch piece that I found on the path around the side of the flats where it had fallen off a neighbour's plant, probably when someone brushed by with the rubbish bins. Now it's about eight inches long and doing well, so I broke off a two inch piece shooting near the base to put in the birdbath. 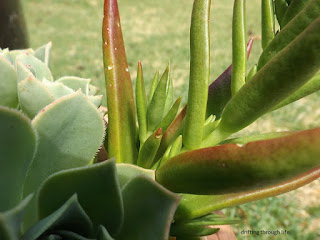 I don't know what this is, but it has grown from a single two leaf section. 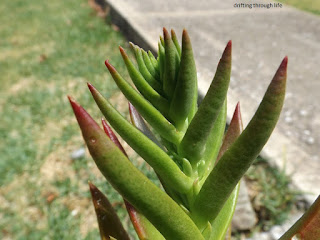 another view. There's a small secondary shoot growing in the middle, when that gets a bit bigger, I'll break it off and repot it. 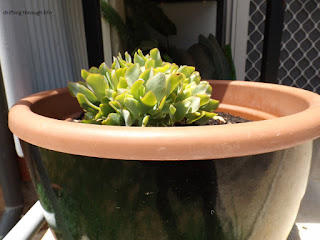 my Crassula "Rippled Jade" has doubled in size, 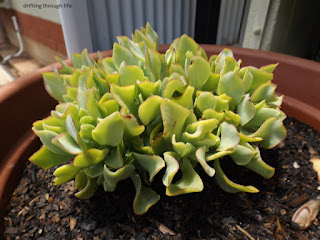 and will eventually fill this big pot. 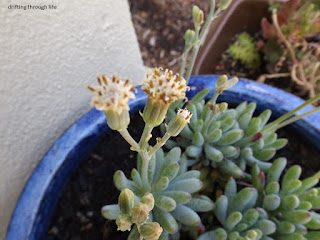 the dwarf blue chalk sticks is also growing well; it was a single clump when I planted it, now there are four and there were a couple of smaller side shoots as well, they are now in one of the bird baths. 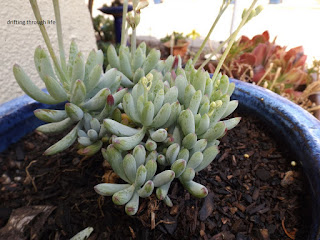 a shot from the side, (here you see the smaller side growths that I took for the bird baths), it looks quite tall, but is only about four-five inches high, plus flower stems.
It's growing so much better than the original blue chalk sticks (non-dwarf) that I put straight into the garden, they were badly decimated first by brown bear caterpillars, then slugs, and just haven't really got going. Certainly not spreading at all, like they are supposed to.

If they don't recover and spread to the two metres they are supposed to, I'll replace them with clumps of the dwarf variety.