I usually go with a theme for my Sunday Selections and this week we're back in my garden, having a look at the pot plants I brought here from P's front porch.

P's front porch is set back further than my garden, and doesn't get much direct sunlight until quite late in the afternoon, so I've put most of her pots along the back edge behind my plum trees. Some I've put where they will get more sun, because I'm sure they will manage just fine. 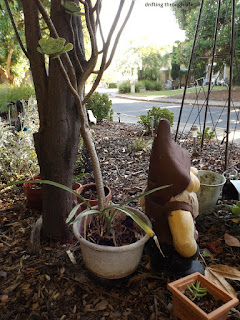 the pot this aeonium is in is very brittle, it's plastic and was out in the sun at the front corner of P's porch for years. I'll have to repot the plant in the autumn. 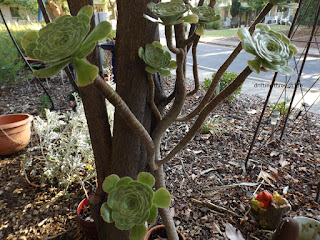 here is the top half of that very leggy aeonium. Last year it had a large flower,  I took a photo, but can't remember which folder it is in. 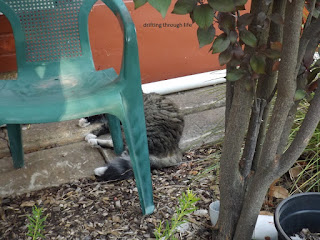 here is Angel hiding under a chair. 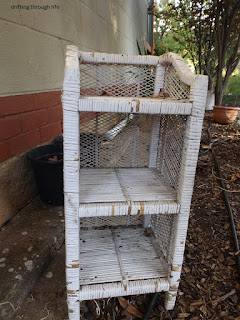 this three tiered cane stand is in good condition, it had a pot on the top level, (dead parsley) and a bag of peat soil on the bottom. The middle had junk including a rather lovely old wallet. I put that back inside P's home with all her other things. 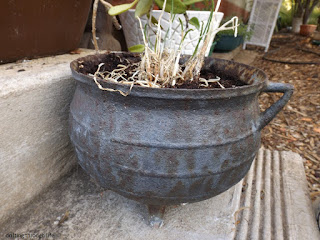 a three legged cauldron with one broken foot, so I propped it up against my steps. I'm not sure if it has any drainage holes, probably not. I'll transfer the contents to a plastic pot with drain holes, then stand that back in the cauldron. I'm not sure what is in here, I pulled up a clump of the grassy looking stuff and it has a bulb at the base, so I put it back in and I'll wait to see if anything grows. There is also a rather long cutting from the hoya, which I have hooked up over the railing for now, I'll fix it on properly after I repot. 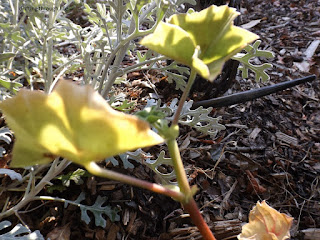 these yellow leaves are a climbing geranium, they should be bright green, but are in a pot with no drainage and haven't been watered in quite some time. Another one that needs to be repotted, then it should be okay. It will need a support to climb on though, I'll have to get a frame next time I'm at the nursery. 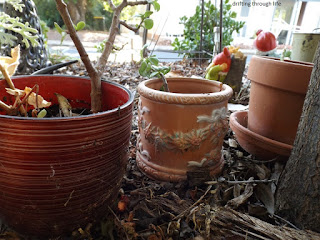 three small pots. The red one on the left holds the climbing geranium and a tall cutting from a small leaf jade. It's a decorative pot, no drainage, so these things will go into a plastic pot, I've got plenty of those, then sit back in the red pot for a while, until they grow out of it.  The middle pot is also decorative only, no drainage and it has a climbing plant I can't remember the name of, just a very small piece which is all that is left of the original. The soil in those two was very soggy after I watered them, I'll have to be sure and not water those two pots until they dry out and get repotted.  The pot on the right is a regular terracotta pot, I'm not sure what is in it, a tiny green cutting of something. 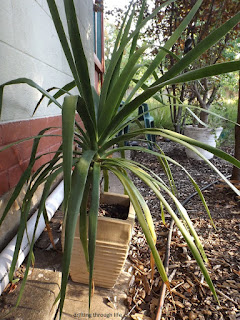 this healthy looking specimen is a dragon tree, according to the label still stuck in the pot. It's quite tall, up to my chest and I really hope it survives. I love dragon trees. 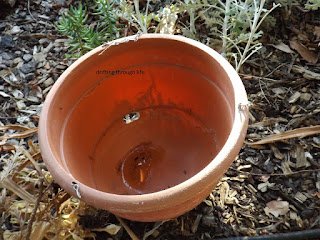 one empty hanging pot, quite large and had slimy sludge in the bottom. 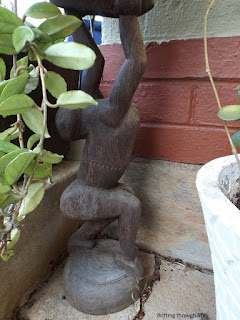 this (ironwood?) woman is quite lovely and she is holding up 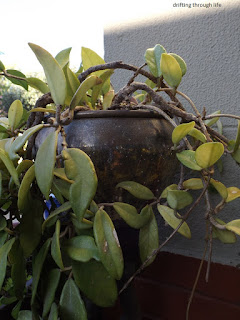 this metal pot of hoya. I won't repot this as hoya prefers to be potbound. 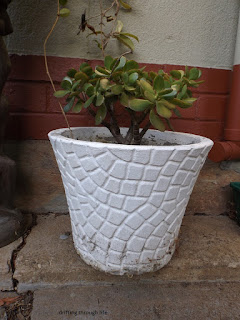 this jade has grown from a small piece I gave to P when she first moved in three and a half years ago. She was able to get around then although already very thin and unsteady (anorexic), she'd said she admired my jades which were then still in pots on my porch, so I broke her off a piece and it has done well. 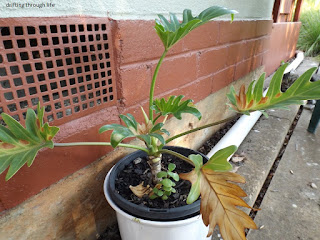 A baby philodendron, the same as I had three of in my previous home. I'll leave it in the shade behind my plum trees and it will be fine. There is a tiny piece of small leaf jade in there too, I'll move that into its own pot in the autumn. 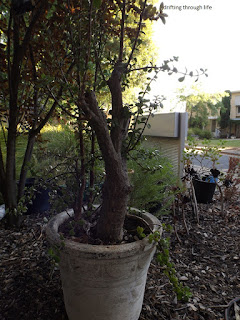 this fat stem belongs to the small leafed jade which has grown quite tall and spindly. After it settles in I'll trim it a bit to encourage extra branches. 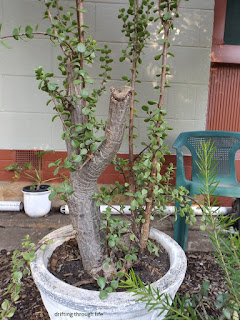 the same small leafed jade seen from the other side. 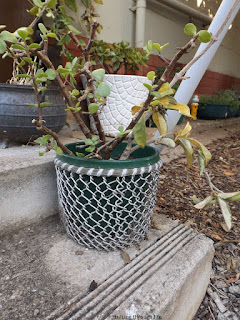 this wire covered pot has another hoya cutting which I have also hooked over the railing, and a long stem of small leafed jade. I think every time a piece of the jade got broken off, P stuck it in the nearest pot. 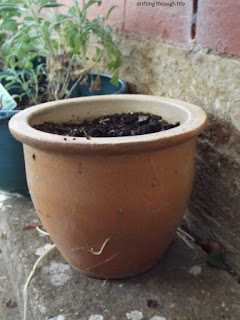 an empty pot, I don't know what was in here, it was very dead and dry so I pulled it out.

The next few photos are from my front porch, my own plants not the new ones from P. 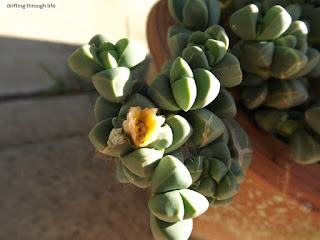 my donkey tail has a flower! I didn't know these things flowered at all, so I was very surprised to see this tiny bright yellow bloom. 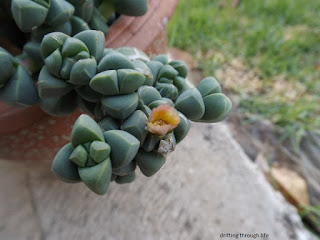 notice the difference in colour when the photo is taken in the early morning light. The previous photo was taken in the late afternoon light. 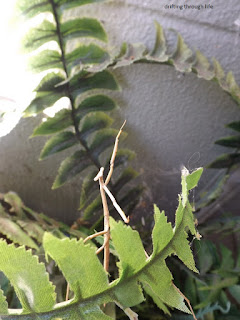 see the young praying mantis?  He is about three inches long now, I've been watching him grow for a while, this is his third summer. The "plant" he is living in is a fake, plasticised fabric. 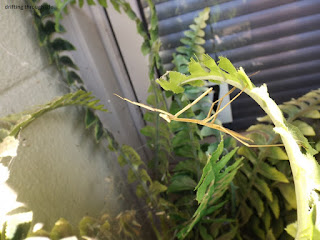 here he is again, with the camera held almost upside down.