Wednesday's Word on a Friday

We have taken over this meme from Delores, who had been having computer problems.
This month the meme continues here, at Randomosity, with words and images supplied by Jacqueline.

we also have:
a sentence, "I think it would be very sad to dance as if you were walking, Miss"
an image of a young man in a wheelchair with a girl dancing beside him
and a music clip
quite a challenge, I'm sure you'll agree

Here is my story:  it's a long one, you might want to get a cup of tea and maybe some gingersnaps.

I'd heard it said during our earlier lecture, that the best nurses were those who had empathy and not sure of the meaning, I looked it up in my thesaurus when I got home that evening. "Sympathy; compassion; fellow feeling; understanding."
I wasn't at all sure I had those qualities, so determined to watch closely and learn in the next few weeks while we assisted the nurses at the rehab. hospital.

We ourselves weren't nurses, Cathy, Bronwyn and I, but we had ticked that box when filling in the forms with potential career choices and here we were, about to spend six weeks living in the nurses dormitory and shadowing them throughout their days, assisting if and where we could.
"It's a good way to find out if this is the right choice for you," Mrs Parker had said as she handed around plates of gingersnaps and cups of tea.

The ward we'd been assigned to was filled with young men undergoing rehabilitation therapy after being badly injured in accidents, most of them in car crashes. In my imagination, I'd pictured a hushed room, with a row of beds, each one occupied by a still body, sedated and bandaged. When I saw, instead, a large sunny room with young men on crutches, in wheelchairs, standing between parallel bars gripping fiercely to stay upright, my shock must have been evident.

I heard a soft chuckle to my left and turned to see a young man with sparkling eyes and joy on his face. He drew his wheelchair closer to me and said, "Do we surprise you Miss? did you expect to see us all in bed unable to move?"
"Well, yes, " I answered, "Lucy the nurse I'm shadowing said this is an accident recovery ward."
"And so it is," he said, "with the emphasis on recovery. Wheel me closer to the window over there where we can see the garden, we can talk while we wait for Lucy to finish helping Callum take his first steps; poor bugger, had his legs crushed under a truck, he'd been drinking with his mates, he's been here for months. I'm Steve."
"I'm Diane, how did you come to be injured?"

"Same as *Callum, sort of, hit by a truck, but I wasn't the drunk one, with me it was the driver of the truck. Drunk as a skunk, took a corner too fast and the whole truck just tipped right over, landed on me and my Harley. My legs got pinned either side of the bike with the truck on top, luckily just my legs, my upper body was free."
Again I heard the chuckle as my face registered shock at hearing this.
"Don't you worry Diane, I'm well on the way to recovery and bloody glad to be alive."

I noted his odd use of phrases, 'poor bugger; drunk as a skunk; bloody glad' and asked where he was from.
"I'm from Australia," he said. "My grandpa Barney was Irish and I have cousins here, so I thought I'd spend a year here and get to know them. Came on a plane and had to wait while the bike travelled by ship, then Dennis and me were going to ride all over Ireland together."

We continued talking as Lucy helped Callum keep his balance; a sturdy orderly standing  close by to take the weight if he fell. After a while, Steve began talking about things he missed now that he was confined to a wheel chair. "I miss my bike," he said, "that machine was part of me, she was red and I'd named her Rosie, a real sweetheart of a bike she was; I miss swimming and walking on the beach, Australia has the best beaches; I miss dancing. Do you dance, Diane? Dance a little with me and my chair here, I can spin these wheels pretty good," said with a wink and another chuckle. 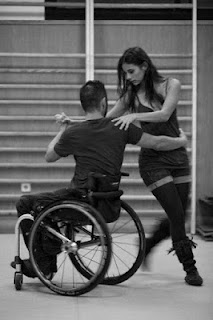 I stammered a little as I replied that I was taking lessons, trying to learn, but it seemed I had two left feet with minds of their own. I was afraid of falling and making a fool of myself. My instructor had decided to start me with what he called the Box Step, which seemed to me to be more like walking while trying to follow the rhythm of the music.

Steve said, "I think it would be very sad to dance as if you were walking, Miss Diane, you need to dip and swirl, float like a feather on the breeze, bend and spin like one of those music box ballerinas; did you have a music box when you were little?" he asked.
"I did," I said, "I used to wind it up every night and watch her as I fell asleep; I used to pretend she was me and then I would dream that I was her, dancing and dancing and dancing all night."


(I love this piece of music)

(* I hope this link works, I've never tried to link to an earlier story before)