We have taken over this meme from Delores, who had been having computer problems.

This month the meme continues here, at Randomosity, with words and images supplied by Jacqueline.

Some of us put our creation in comments on the post, and others post on their own blog.  We would really like it if as many people as possible joined in with this fun meme.
If you are posting on your own blog - let us know so that we can come along and read your masterpiece.
I’m hopeless at poetry so I always do a story.
It’s a fun challenge…why not join in?

and:   an image of an old man smoking a pipe.

Seven year old Nathan bounced into the kitchen, followed closely by Lucy, who was five.
"Mum, what does poppycock mean?"
"Poppycock? Where did you hear that?" asked Mum.

"Gramma Ruby said it just now. Grampa Duke was telling us stories he makes up and Gramma stomped in all cross and said he was an old goat and shouldn't be filling our heads with poppycock." said Nathan.
"Why is Gramma cross?," asked Lucy. Mum said, "Gramma has arthritis and probably her hips and knees are hurting again, remember when I told you about that?" Lucy nodded then eyed the brownies that had just come out of the oven.

Nathan asked again, "what's poppycock mum?"  "Well it just means silly nonsense that couldn't possibly be real," said Mum.  "Where is Grampa now? Is he still in the back porch?"
"No," said Lucy. "He went out the back and up the little hill by the old cubby house, where he can look down on the ocean. Can we take him some brownies?" "That's a great idea," said Mum, "and I suppose you'd like some yourselves?"
"Yes, yes, yes," they both said together.

They carefully carried a plate with brownies outside while Mum made a cup of tea to take in to Gramma Ruby. She would sit and chat a while, it wouldn't matter if dinner was a little late. Gramma needed someone to sit with her when the pain got bad, she didn't like the medication that helped reduce the pain because it made her constipated and as far as Ruby was concerned constipation was the cause of half the world's troubles. The pain would go away as soon as the weather changed.

"Here we are Gramma, a nice cup of tea and a fresh brownie," Mum said. She noticed the tears that glimmered on Gramma's cheek and gave her a gentle hug, then folded the faded old quilt over her knees.

"I'm sorry," said Ruby. "I didn't mean to be cross, I'm just a bit cranky I suppose, waiting for the storm to break. I know the aching will stop as soon as the rain begins."
"It's alright Gramma, the kids understood, no harm done there. But I think Grampa might need a little sweetening up when he comes in."

"His stories bring back so many memories," Ruby said.  "When we were young, before we married, he told such tales every day and I said to him, 'write them down, make a book', but he never did, always said they weren't good enough, a book like that wouldn't sell and he needed to make money so he could marry me and buy us a house. And that's what he did. This house. It was smaller then, we added rooms as the kids came along."

"I remember," said Mum. "When I married Barry, you offered to build us another room, to be a nursery, but we all decided the house had enough rooms already. We knocked out a couple of walls instead and mum's old room became a suite."

Mum and Gramma Ruby both looked to the back of the house where the path led up the little hill. They heard laughter as the children and Grampa started up with the stories again. "How about we make him sausages and gravy for dinner," Ruby said. "With mashed potatoes and peas. He loves peas."

"That's a good idea," said Mum. "I was wondering what to cook tonight." "You go on then and get started," said Ruby. "I'll speak to Duke when he comes in again, apologise, give the old boy a kiss maybe. He knows I still love him."

Within half an hour Nathan and Lucy came running inside to get the umbrella. The rain had started and they wanted to keep Grampa Duke's pipe dry while he came down the hill. 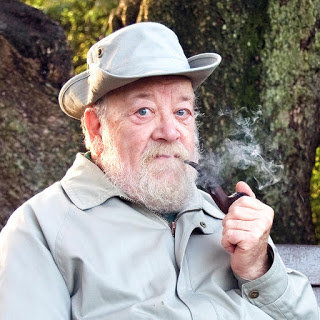 All excited Nathan said "Guess what we saw? you'll never guess!  a whole bunch of pelicans taking flight all at once!"