September 15, 2011
Worldwide, every country has its own wanderers.
(Googled images; thanks google) 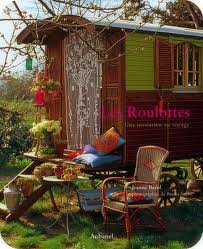 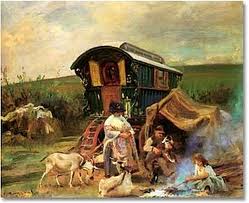 those who are constantly on the move, never settling to a permanent address, although many groups, (tribes/clans) often have a defined winter or summer area.

They move in, stay awhile, move on.

Back in the depression days, solitary men in Australia, who moved from area to area doing odd jobs for a few shillings or just a bag of flour and some tea, were called Swagmen.

The Swags they carried on their backs were usually a change of clothing, a few eating and cooking utensils, sometimes notepaper and a pencil, all tightly rolled up in a blanket, and slung across the back. From this usually hung a billy for boiling water to make tea, sometimes a pot or frypan for cooking food, a bag containing the essentials; flour, sugar, tea, salt, maybe some jam for the damper they cooked in place of bread.

A hat strung with corks to keep flies away from the face completed the swaggies outfit. 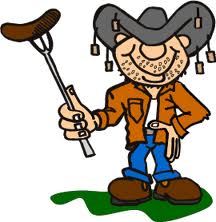 Mnay swaggies of the time were family men who took to the roads looking for work in order to send a few shillings home each week or month to the families they'd left behind.
Times were tough and work in the cities was hard to find. So they'd walk for miles, sometimes hitching a ride, from farm to farm, station to station, (ranch) doing whatever work they could find.

As the economy improved, many swaggies returned to their homes and families, renewing their marriages, once again getting to know children they hadn't seen for quite some time.

A few men found it hard to settle back into town life, they'd been bitten by the "wandering bug" and felt the need to remain on the move.
Many joined circuses and carnivals to satisfy this need.

Thinking of these wanderers brings to mind thoughts of the apostrophe.
Are these little indicators of possession or abbreviation the nomads, the swaggies, of the written language?

They'll move from word to word, sentence to sentence, popping up in unexpected places, always moving on, rarely staying "home".

Often travelling for so long that no-one is really sure anymore of where they do belong, these little gypsy curlicues of the written word.
aussie history; wandering apostrophes