January 05, 2012
Some of you may remember my post of 6/10/10, titled mid-north SA, in which I mentioned the high towers in many back yards around Port Pirie. These had TV antennas attached to them so that we could pick up TV programs from Adelaide.

I'd asked my sister to send me some photos of these if she could, please, and expected her to take her camera on a little walkabout and snap me a few shots.
Well, she didn't.
What she did instead, was hunt up a photo that she knew she had somewhere, finally found it and had it photocopied to send to me.
And then forgot to send it.
Until now.
I got a letter from J yesterday, with photos inside.

Here it is, one television antenna tower, >>>> 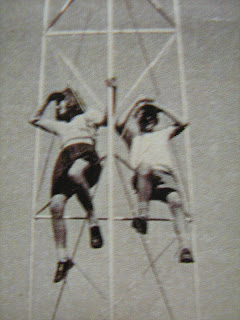 I have absolutely no memory of this photo being taken, but that is definitely me and R about two thirds of the way up on the tower, posing for Dad.
And would you look at me wearing a skirt!  That's something I don't do anymore. (nor do I climb TV towers...)

Another photo included was an old school photo, class of 1963.
I won't publish the whole photo as there are people in there who might not want their childhood faces all over the internet, but I've isolated one insanely grinning little face.
It's a little fuzzy, sorry about that. >>>> 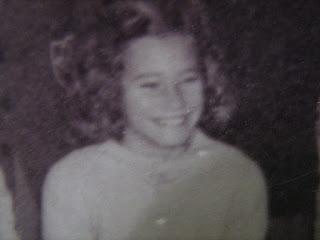 This is me, aged either 10 or 11, depending on which end of the year this was taken.
From memory, these school photos were usually taken during first term, but all of us are wearing jumpers or cardigans, so perhaps it was taken during second term. I'll never really know.