wedding, and other, spoons

January 07, 2012
When I first got married, wa-a-ay back in 1971, my mum organised the younger siblings, step-siblings and friends when it came to gift buying. (She knew what she wanted me to have.)

Now, all these years later, these two teaspoons and a knife, are all that remain of the original settings. I don't remember what happened to the rest, I'm not one to lose things, but disappear they did. 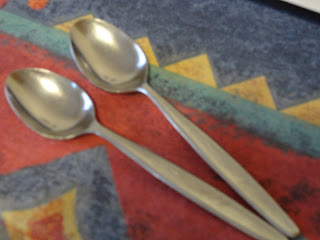 Here is a close-up of the design on the handles. 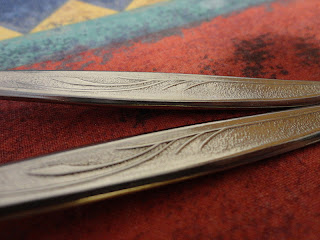 In between then and now, there has (have?) been three different cutlery sets, one that came as a bonus package along with a stoneware dinnerset I bought, long since passed on to one of the kids, a cheap (and cheap looking) black plastic handled set which I didn't like for very long as the handles started falling off, a more expensive black plastic handled set which lasted right up until 2010.

Then, two days after L left, in a euphoric rush of freedom spending, I bought my current cutlery set.
I'd planned on lay-bying it, but when I went to the store it was on sale for half price, so it came home with me the same day. 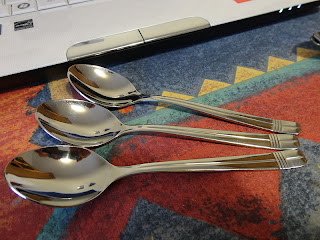 It's a setting for eight people, which is more than I need, (unless 7 people all drop in at once for coffee and cake) but I liked the design and the way they balanced in my hands. I'd been eyeing them off for weeks.

Here is a close-up of the design. 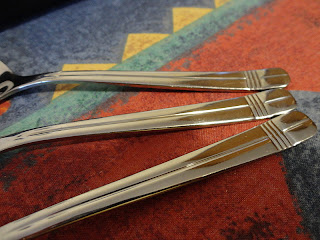 I have two teaspoons left from a set of six that my mum gave me as an engagement gift.
When she was a child, her Dad had won them as a prize for his show rabbits.
Silver plated, in a box lined with blue velvet, I was supposed to keep them to pass on to my first-born girl as her engagement gift, then she would do the same and so on.
Mum didn't tell me I was supposed to do this, so of course I used these very pretty spoons and when mum eventually came to visit me, she wasn't happy. Too bad. ﻿ 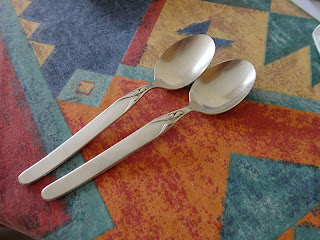 ...not looking too shabby, even after years and years of stirring my coffee.
(I'm fairly confident I know what happened to the other four, but that tale shall remain untold)

Here's a close-up of the design. 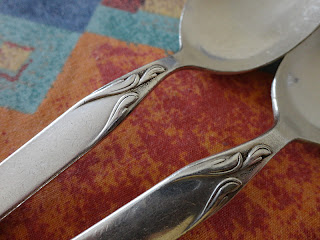 Simple, elegant...not at all ostentatious, which is a good thing, because I don't like stuff that's too show-offy.
That's my camera reflection making the nearer handle look darker.
spoons; cutlery wedding; biscuits