Our cities are being decorated with garlands, tinsel, baubles large and small.

In Adelaide, our annual pageant is being held tomorrow.

From the time that I was quite small, 4-5, until fairly recently, (1995-6?)it was The John Martin's Christmas Pageant. Then John Martins (large, family friendly department store), closed down and David Jones took over the pageant. That didn't last long and now it's run by one of the major building societies.

It's still very popular, although many of the original floats are no more and have been replaced by "bigger", "better", "more", with many of the themes seemingly unrelated to Christmas.
(to me anyway).

Today after lunching with my K, I took a few photos of some of the decorations.

Along Grenfell Street there are reindeer suspended high above on the street light poles. 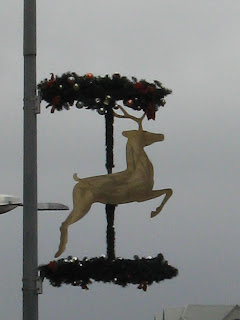 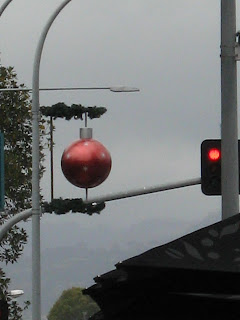 This enormous Santa used to always be on the Rundle Mall facade of the John Martins building, indicating the location of Santa's Cave, where Santa would make daily appearances from the end of the pageant until Christmas Eve. Now this large jolly man is on the facade of what was the original David Jones building, I believe. 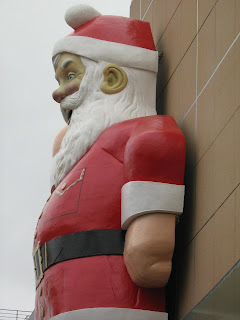 All along Rundle Mall are giant baubles, stars and candy canes too. I forgot to photograph the candy canes, but I'm sure you all know what they look like by now. 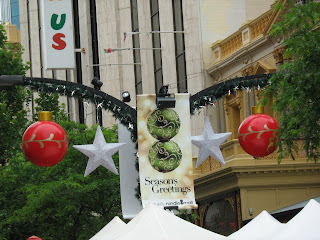 See these banners? One of my sons works for a company that makes these types of things for events all over Australia. I'm not sure if they made this year's banners, they have done some in the past. 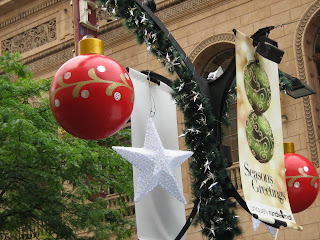 In my opinion, the prettiest decorations this year are in the Adelaide Arcade, which runs between Rundle Mall and Grenfell Street.
Garlands and Wreaths in green and gold, ribbons and baubles, with sparkling lights twinkling all along the Arcade. 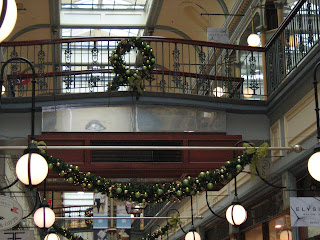 Here's a closer look at a garland, I'm sorry still photos don't show the lights twinkling, just use your imagination for a minute. 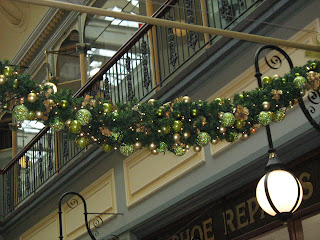 Here is one of the trees. 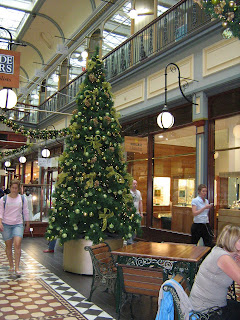 And here is a tree with Santa, reading from his naughty and nice book. He looks pretty happy, so I'd say the "naughty" pages are all blank this year. 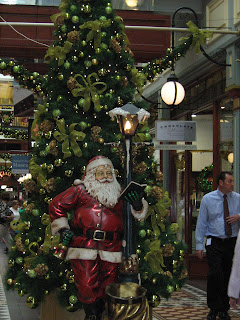 Further down Grenfell Street, towards King William Street, are these new, really cute, Santa decorations that I've never seen before. 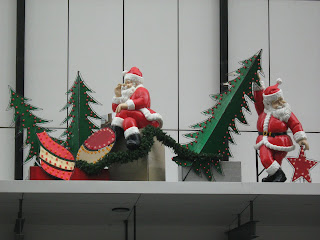 Look at this cheeky fellow, eyeing off the passers by. 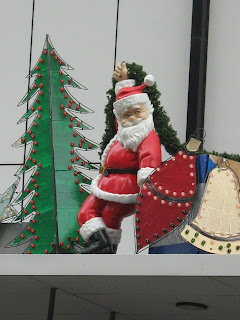 So how is your city looking, this close to Christmas?
Will you be taking the kids to see the pageant?

I don't go to see our pageant anymore. I do see parts of it broadcast on our news service, and the whole thing is live on the ABC on the morning, but I'm usually working, so I miss that.

The local Norwood pageant is being held on the 27th, I'll be at work, but I might be able to duck out for a photo or two. I'll have to sweet-talk the boss a bit.