Buskers, Buildings and a Ferry Ride

Technically, the next two posts shouldn't come under the AusBlogCon heading, since the conference and dinner dance are well and truly over.

But today there are still a few of us in the hotel, some eating breakfast, probably a few upstairs sleeping off the champagne and dancing of the night before. I hope there aren't too many hangovers.

I woke early and went down to the Seasons Cafe for breakfast, a plate of yummy sliced fruit and some apple juice.
Back upstairs in my room I was overcome with tiredness so went back to sleep for a couple of hours.
On waking for the second time, I discovered it was still raining, so walked to Elizabeth Street where I knew I would find some shops, thanks to Helen, who had emailed me this information before I left Adelaide.
I bought an umbrella, 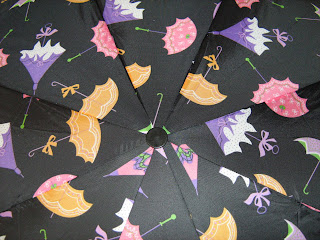 so I could wander around a bit without getting too wet and also a jacket, because I knew it would be cold out on the harbour.

Back at the hotel, I met up with Carly in the lobby. She'd just checked out and was waiting for her ride to the airport, but had some time to spare so walked around a couple of blocks with me to a cafe where we each had a drink and chatted for a while. Chocolate milkshake, yum. Carly had something apple-y and very green.

Heading back to the hotel, we said goodbyes and went our separate ways.
Carly heading to the airport and me catching a bus to Circular Quay. 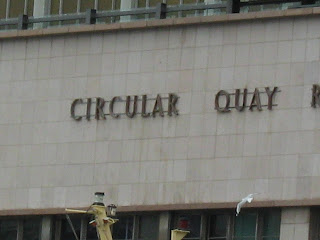 I bought a ticket for a harbour cruise, but had almost an hour to wait, so I bought one of these chicken-on-a-stick thingys to munch on, 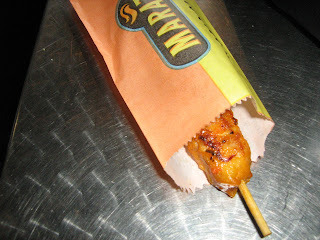 then wandered around taking photos of buskers, 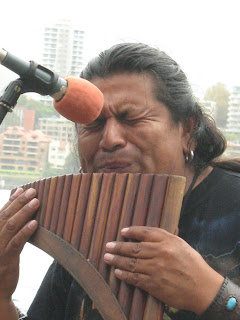 and just generally enjoying the atmosphere. 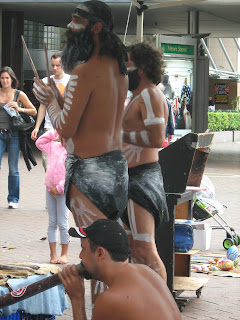 It had stopped raining soon after I bought the umbrella, so I wasn't worried too much about getting the camera wet.
Once on the ferry, I took photos of some of the other ferries coming and going, 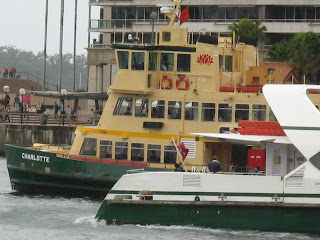 and the water taxis that were busily taking people across the harbour. 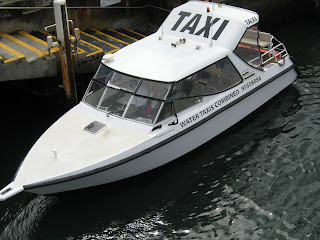 Here's a couple of photos of some of the really tall hotels standing behind Circular Quay. 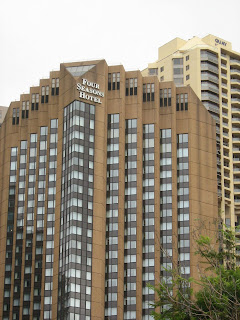 This one easily dwarfed all the others. 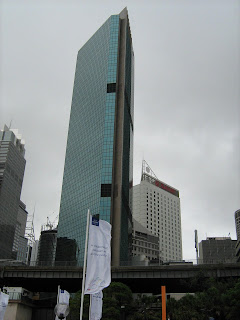 On the boat with me were a few people who had already done the cruise and were staying on for a second go-around and a large group of Japanese tourists most of whom had cameras clicking away madly, just like me.
A few stayed down on the lower decks, but most were up on the top sundeck where I was. I like being up high and I figured any spray from the ocean wouldn't reach that high so my camera was safe.
We cleared the docks area and the water out in the harbour was very choppy and the wind felt like a gale. Taking photos wasn't easy with the wind buffeting me and the ferry bouncing up and down on the waves, but I took lots and deleted the blurry ones later. I had to keep a really tight grip on my camera! Maybe I should invest in some kind of neck strap?
As we cruised around, there was a commentary over the speaker system about the various landmarks as we passed them. I would have liked to listen and learn what the landmarks were and a little of their history, but it couldn't be heard unless I stood right beside the speakers, and really, who wants to do that when they can stand right up against the railing and feel the wind and waves.
Missing the commentary means I have no idea what these two islands are, 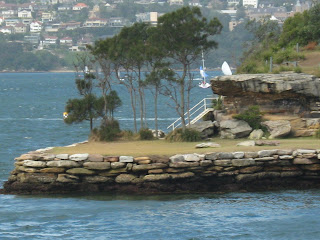 but I know one of them was a prison back in the convict days. 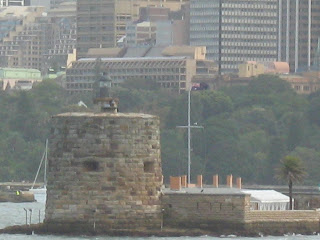 These are some of the sailboats we saw, (me and the tourists), 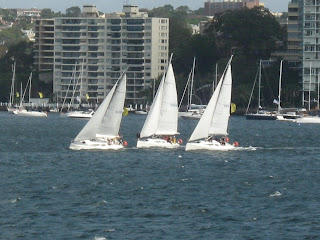 heeling over, coming around, whatever it is they are doing...... 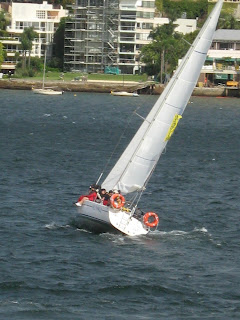 and a bit further around we spotted these rowing boats..... 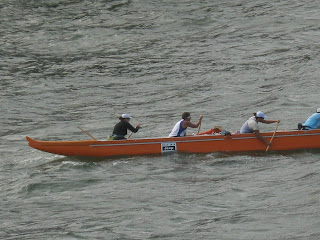 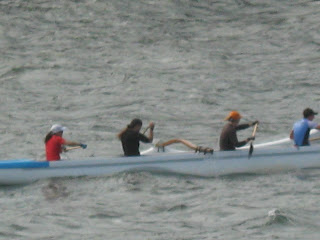 Now for a few photos of some of the homes situated around the waterfront.
Imagine living with those views every day! 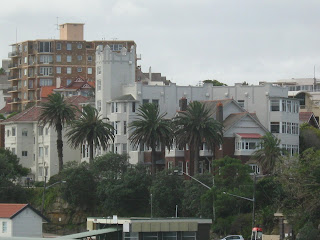 This is one of the original cottages built so very long ago. 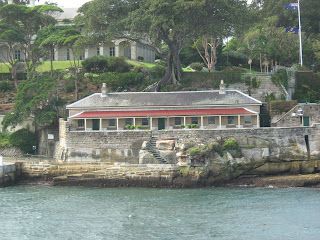 Not sure if this is a home, a hotel, or an apartment block. 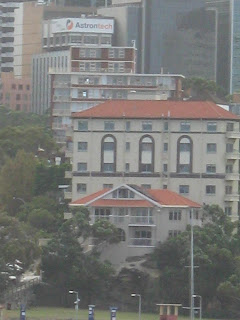 One of these homes is a politician's residence, 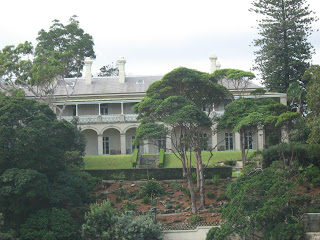 but I don't remember which home, 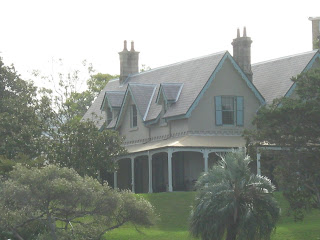 nor which politician. Don't particularly care either, I was just admiring the architecture.....
I had a lovely time out on the water but the cruise was soon over.
An hour and a half; gone just like that. * (fingersnap)
I was planning to wander around Paddy's Market at Haymarket tomorrow, (Monday), but learned from the brochure that it isn't open on Mondays. Hmpf!!
Having to check out of the hotel by 11am means that anything else I choose to do will be restricted time wise, so I'll decide in the morning.