You know, I was so excited to be coming here to Sydney, then once I got here I found myself too shy to actually talk to many people. Gave myself a kick up the bum, but it didn't do any good.....


The event itself was fun, the dinner dance was even more fun, yesterday's ferry ride was heaven, but now I feel a little like a deflating balloon.


Last night I'd made tentative plans to go out and about a bit, maybe visit a nearby Chocolaterie, "Kakawa"; 147 William Street; just a few minutes walk from the Bayview, it was given a 5 star rating for its chocolates and caramels and its hot chocolate is listed on the brochure as "THE BEST I've ever tasted.


I scrapped all plans in favour of going back to bed after taking a few pre-dawn photos and seeing that even more rain was threatening. 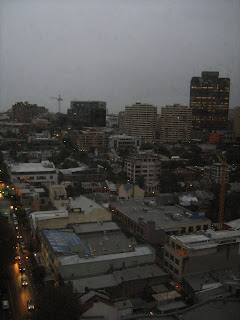 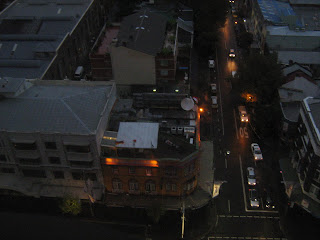 A bus in a hurry. 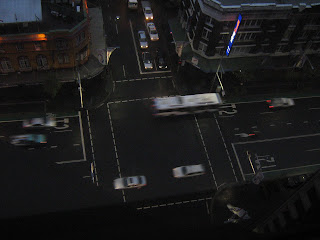 So I made coffee, (urk! it was awful!) and took my book to bed and actually read a few chapters.
By now it was raining again and I was thinking of home.
My own coffee, my own kitchen, sleeping in my own bed, having all my things around me, logging on to the lovely (not so anonymous now) internet.
Looking out at the rain a little later, I thought, Bugger this, I'm going home!
I'll head to the airport and just hang around until my flight.
Packed, checked out, got a taxi to the airport.
On the way we passed a little cafe (chocolate shop?) with this interesting name:
"Strangers with Candy - Food for Temptation"
Holey Doughnut!!
6 hours hanging around in an airport!!
There's an experience never to be repeated.
My flight wasn't until 5:10pm, so with two heavy bags and a handbag I wandered through shops, sat on seats, wandered through more shops....
I ate pastries and drank enough hot chocolate to float a boat.
I looked at books in the bookshops and wrote down the titles and authors of those that looked interesting, so I could find them at my local libraries back here in Adelaide.
I found a long bench table against a huge window where I could watch planes coming and going.
So naturally I took photos. Lots and lots of photos.
Here's a few of them.
JetStar seen through a rainy window. 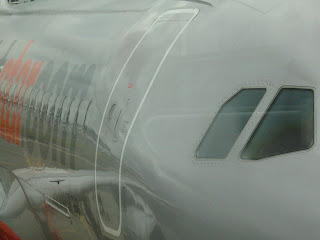 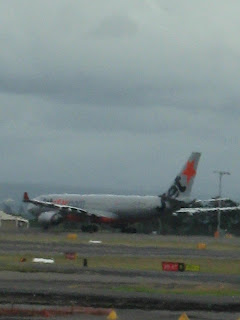 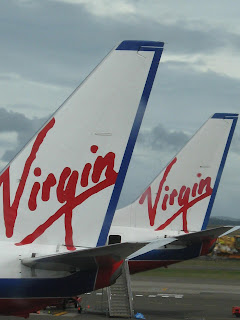 When I was a little tacker, there was only TAA, Ansett and Qantas; now there are so many airlines.
Tiger Airways. 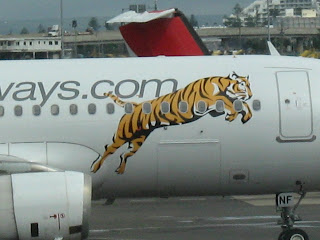 The tail of the tiger. 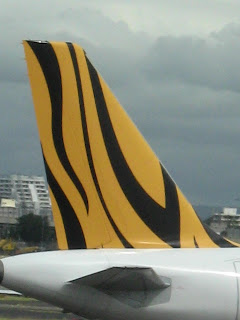 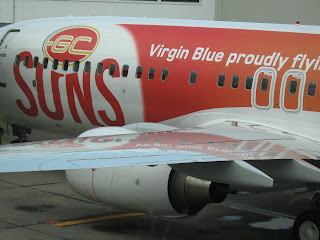 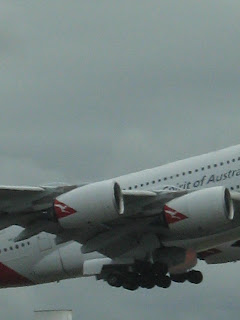 Look at the size difference here!
Those big international airbuses make the little ones look like toys. 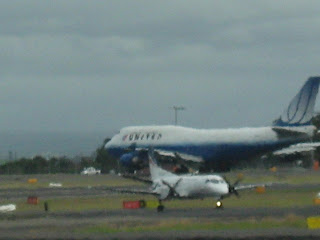 Here's something we don't see too often; propellers! 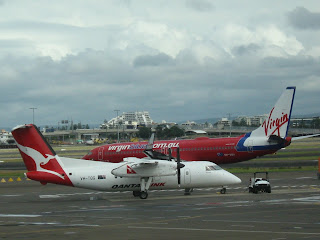 The flying kangaroos of Australia. 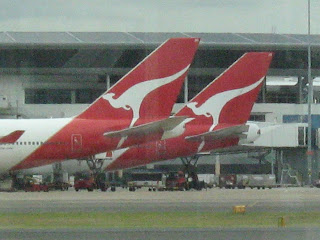 More propellers and another tiger. 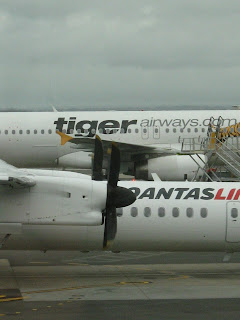 I don't want to bore you, so here's just one last photo. 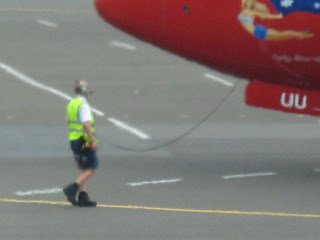 By the time I boarded I was so desperate to be home, I cried on the plane.
15 minutes out of Sydney, we flew out of the heavy grey clouds into bright blue skies above us and a sea of foamy white clouds below.
I wiped away tears and tried to read my book, but couldn't help gazing out at that gorgeous blue sky every few minutes.
Touching down in Adelaide......a gentle bump as the wheels kissed the tarmac, then we were down, taxiing to the gate and leaving the plane.
Once inside the terminal, tears flowed again as I texted my kids to let them know I was home, then I went to find a taxi.
Home.
There's nothing like it.